The national capital had banned generator sets, barring those being used in essential and emergency services, on Tuesday, as the air quality in several places in the city and adjoining areas slipped to "very poor" level.

The air quality in Delhi-NCR was recorded as 'poor' on Wednesday, according to the Air Quality Index (AQI) data. The Delhi government has shared NASA satellite images depicting "largescale stubble burning" in the national capital and its adjoining areas on Tuesday, a day when the region's overall air quality slipped to "very poor" levels. 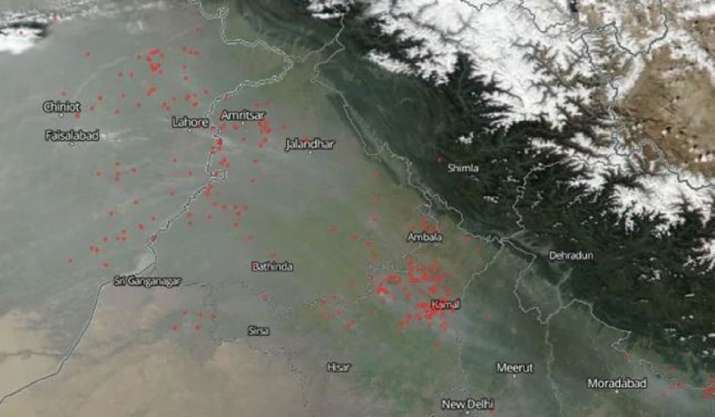 On Tuesday, the air quality in the national capital had slipped to 'very poor'. Observing that the worsening air quality is causing fatal diseases to people in Delhi-NCR, the National Green Tribunal on Tuesday asked Uttar Pradesh, Haryana and Punjab to depute a person each to report daily on air pollution due to stubble burning.

Taking note of a news report in an English daily that said crop burning shoots up carbon dioxide levels in the air by 70 per cent, the NGT asked UP, Punjab and Haryana governments to sensitise farmers on pollution caused by burning of crop residue.

It also expressed concern that equipment are yet not made available to farmers.

The Centre's counsel told the NGT bench, headed by its chairperson Justice Adarsh Kumar Goel, the Union government has disbursed Rs 600 crore which was being paid to farmers to purchase equipment, however, additional funds will have to borne by the states.

"The fact remains that there is an adverse impact of burning of such residue on air quality causing air pollution-related diseases which at times may be fatal," the bench said.

"Every year in October-November, the problem of air pollution is acute in and around Delhi, threatening the health of infants and senior citizens," it said.

It said 25-30 per cent air pollution in Delhi-NCR is caused by stubble burning in October and November every year.

The Punjab government told the bench that it has set up a special cell in the office of the chief secretary to review the number of paddy straw burning incidents on a daily basis.

The tribunal directed the states to file an action-taken report by November 15, the next date of hearing.

It had ordered the constitution of special cells in the office of the Delhi chief secretary and neighbouring states to monitor the air pollution caused by the burning of crop residue. Similar cells may be required at the offices of district magistrates or at such other levels as may be considered necessary by the state authorities, it said.

The national capital had also banned generator sets, barring those being used in essential and emergency services, on Tuesday, as the air quality in several places in the city and adjoining areas slipped to "very poor" level.

The ban on generators is a part of the Graded Response Action Plan (GRAP), a set of stricter anti-pollution measures to be taken according to the severity of pollution, that came into force on Tuesday.

This is the first time that the ban on gen-sets has been extended to NCR cities of Gurgaon, Ghaziabad, Noida, Greater Noida, Faridabad, Sonepat, Panipat and Bahadurgarh.

The Centre-run System of Air Quality and Weather Forecasting And Research (SAFAR), in a report, said, "Delhi's overall air quality is in the higher end of the 'poor' category. It touched the 'very poor' category for a brief period on Monday night."

Meanwhile, the Indian Meteorological Department said the city's air quality is likely to improve due to changing weather conditions.

"A fresh Western Disturbance is likely to impact the Western Himalayan region from October 18. It is likely to enhance the wind speed which will help disperse pollutants," said Kuldeep Srivastava, a senior scientist at IMD.

SAFAR said stubble burning incidents in Haryana, Panjab, and nearby border regions have shown an increasing trend over the last 24 hours.

Data available on SAFAR's website showed the share of stubble burning in the PM 2.5 concentration in Delhi was 5 per pent on Tuesday.