The Union Ministry of Health and Family Welfare issued a fresh travel advisory on Monday urging people to refrain from visiting China.

The Union Ministry of Health and Family Welfare issued a fresh travel advisory on Monday urging people to refrain from visiting China."Travel Advisory further revised informing the public to refrain from travel to China and that anyone with travel history in China since January 15, 2020 and from now on could be quarantined," said the statement released by the ministry here.

The ministry informed that e-Visa already issued to Chinese nationals was not valid temporarily. "The facility for submitting the application online for the physical visa from China is suspended," the ministry said. 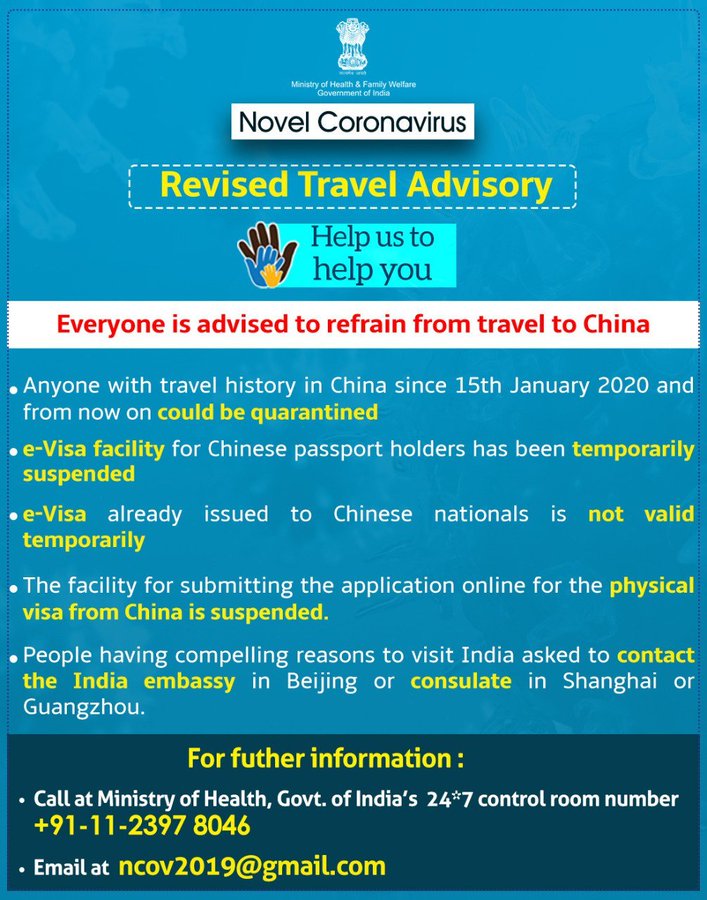 It also advised to contact the Indian embassy in Beijing or consulate in Shanghai or Guangzhou in case of people having compelling reasons to visit India.

Earlier on Sunday, the Ministry had informed that apart from China, people coming from Singapore and Thailand were also screened at the airports.

The World Health Organization (WHO) has also released information and advisory to the public regarding the novel coronavirus outbreak in China, which the world body has declared a global health emergency.

"Antibiotics do not work against viruses, but only against bacteria," the WHO said on its official website, noting that as it was a virus, antibiotics were not effective in preventing or treating it, reported Xinhua news agency.

However, if a patient is hospitalized for the virus, the person may receive antibiotics since "bacterial co-infection is possible", the organization added.

Up till now, there is no specific medicine for preventing or treating the virus, but some particular cures are being studied and will be tested in clinical trials, the WHO said, adding that it was working with partners to help accelerate related research and development work.

"People of all ages" can be infected with the novel coronavirus, while the elderly and those with pre-existing medical conditions such as asthma, diabetes and heart disease are more susceptible, the WHO said.

But the organization advised people to wash hands with soap and water after contacting pets, which can help protect them against "various common bacteria such as E.coli and Salmonella that can pass between pets and humans".

On Monday, the number of deaths in China rose to 361, with 17,205 confirmed cases and 475 discharged from hospital, according to the National Health Commission.

There are two confirmed cases of novel coronavirus in India too. Both have been reported from Kerala.

Also Read | Can pets at home spread the new coronavirus? WHO answers