Fair organized at the time of Mata Kheer Bhavani Jayanti has come to represent Hindu-Muslim unity and has become a place for Kashmiri Pandit families to reunite.

Kashmiri Pandits from across the country and world came in large numbers to visit the Kheer Bhavani Shrine.

Kheer Bhavani Mata Jayanti is celebrated each year in Tulmula village. In spite of the mass exodus of Kashmiri Pandits from the state due to militancy in 1990s, devotees have a special place in their hearts for Kheer Bhavani shrine.

Hindu community in Jammu and Kashmir worships Kheer Bhavani as a Kuldevta (family deity). Devotees come at the temple from everywhere to worship Kheer Bhavani who is said to manifest in the form of life-giving water. 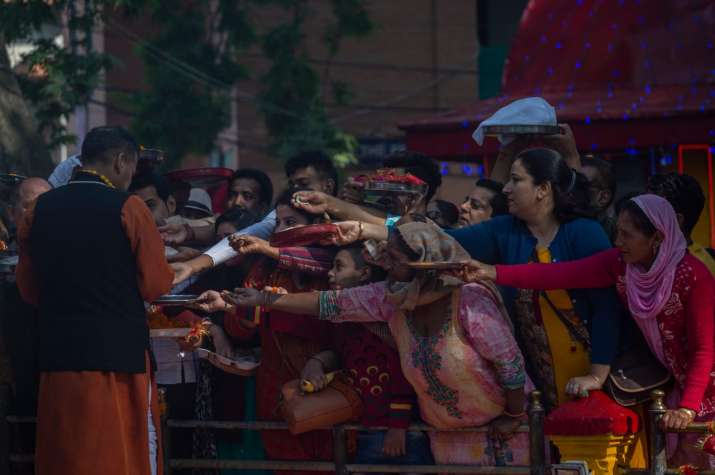 The most striking aspect of the temple complex is a water reservoir which is believed to represent the holy essence of the goddess herself.

The temple was made by King Hari Singh in the year 1912 soon after discovery of the pond. A fair is organized each year in the name of the Goddess herself on the same day the water reservoir was discovered.

The fair has come to represent Hindu-Muslim unity as well. Members of Muslim community not only take part in the fair but also arrange for the Puja and take care of security arrangements as well.

Kheer Bhavani Mata’s fair has also become a place for Kashmiri Pandit families to come together. It is being hoped that as situation in the state improves, the community will increasingly be able to come back to home they were forced to leave.

It is believed that colour of the water in the Holy ponds gives a sign of things to come. The water has been a pristine shade of blue, a colour considered auspicious.