Once the Noida City Centre-Noida Electronic City section becomes operational, the extended corridor will bring the Blue Line close to the recently-opened Aqua Line, which connects Noida and Greater Noida.

The much-awaited connectivity between Noida Metro's Aqua Line and Delhi Metro's Blue Line is set to be established tomorrow with the inauguration of Noida City Centre-Noida Electronic City extension. Prime Minister Narendra Modi is set to give the green signal to the extension at a rally being organised in Ghaziabad.

Delhi Metro's Ghaziabad corridor set to be inaugurated on March 8

Delhi gets green signal for three new Metro corridors: 46 stations to be added to existing network 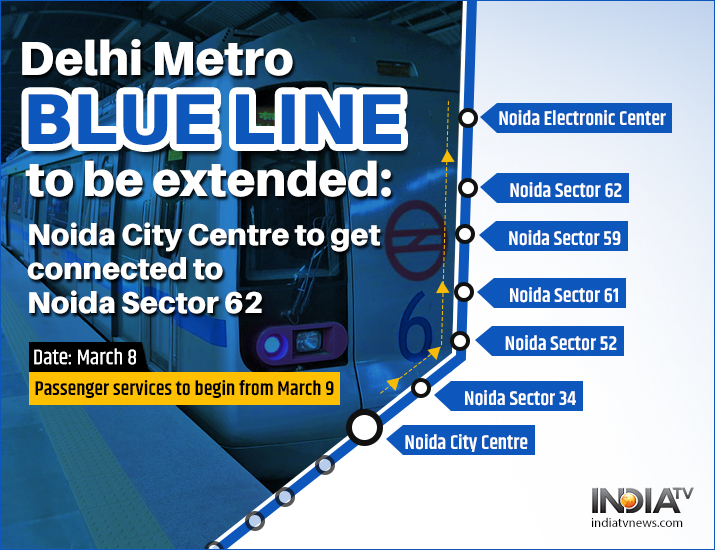 The Sector-52 station of the DMRC's Blue Line is very close to the Sector-51 station on the Aqua Line, operated by the Noida Metro Rail Corporation (NMRC), and its commuters are awaiting last-mile connectivity between the two lines.

There is a distance of around 300 metres between the Sector-51 metro station, the terminus of the Aqua Line in Noida, and the upcoming Sector-52 metro station of the Blue Line. Plans are afoot to connect the two lines through a dedicated pathway and a carriage-way for e-rickshaws, officials had said.

On the same day, the prime minister is also slated to inaugurate the 9.4-km-long Dilshad Garden-New Bus Adda section, an extension of the Red Line.

The Delhi Metro's current operational span is 327 km with 236 stations.  After opening of the two corridors, it will extend to over 342 km with 250 stations.