On comedian Kapil Sharma's birthday, look how he loves spending time with his mother, wife and daughter

Comedian Kapil Sharma is celebrating his 39th birthday on April 2nd, 2020. On his special day, let's have a look at how he is fond of his mother, wife Ginni Chathrath and daughter Anayra who is three-months-old.

If there's one name of a comedian that every Indian remembers, it is that of Kapil Sharma who is these days seen in his The Kapil Sharma Show. One of the most successful TV hosts of recent times, Kapil has emerged out strong after facing a difficult phase in his time when everything was not going well for him on the professional front. Despite so many controversies, fights, and fallouts, Kapil Sharma managed to keep his head above the water. The comedian is celebrating his 39th birthday on April 2nd however due to widespread coronavirus he won't be able to celebrate it with great pomp and show but on the positive front will be able to celebrate it calmly with his family including mother, wife Ginni Chathrath and 3-months-old daughter Anayra.

Kapil rose to fame when he won the comedy reality show The Great Indian Laughter Challenge in 2007. Soon he became a household name for his spectacular comic timing and further went on to win the six seasons of Comedy Circus after which he began his career as a tv host. But one thing that has kept him going strong is the fact that he has always been grounded to his roots. We have time and again heard and seen the mention of the 'ladies' in his life and so on his special day let's have a look at how the comedian is very fond of them.

Thank u so much fr ur love n best wishes 🙏 wish u all a very happy new year from me n @ginnichatrath .love u all 🙏🎂

❤️🙏 happy Mother’s Day to all the mothers in this world.. this world is beautiful because of you 🤗 #respect #love #unconditionallove 🙏

Talking about Kapil and Ginni, the two tied the knot in December 2018 after having twin Hindu and Sikh wedding ceremonies in Jalandhar on December 12. Talking about what made Kapil decide it's Ginni whom he wants to marry, he previously told Hindustan Times, "We did not have the usual dating scenario as both our families are conservative. Last year, when I was going through a low phase, she was there with me throughout. That’s when I felt that if she is with me during my low phase, then she is the one for me. I can rely on her."

The power couple was blessed with a baby girl on December 10 last year. He announced her arrival with a tweet that read, "Blessed to have a baby girl. Need your blessings. Love you all," later which he shared an adorable picture of the baby with a caption that read, "Meet our piece of heart “Anayra Sharma” #gratitude."

Talking about the comedian's mother, Janak Rani, we have always seen her sitting in the audience during his show. 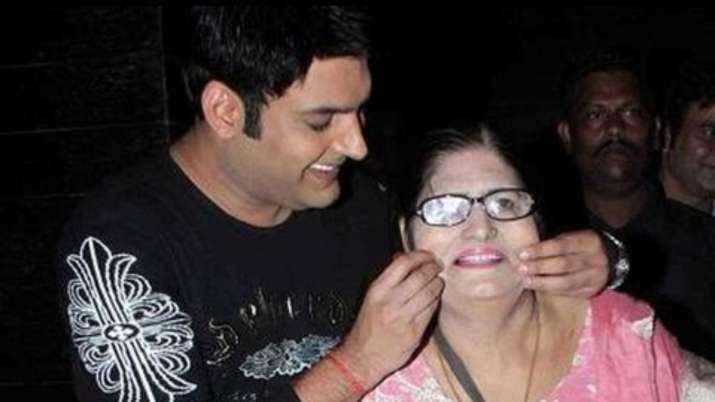 Meanwhile, he most recently shared a picture of his daughter Anayra from her first Kanak Puja, or Kanya Puja, which is held on during Navaratri. The baby looks cute as a button in traditional attire and smiles cheerfully looking at the cameras.