Actress Sonalee Kulkarni revealed that she got engaged to Kunal Benodekar on February 2, 2020, before the lockdown was announced but decided to keep it under wraps. As soon as the good news was announced, her good friend and Bigg Boss 12 winner Dipika Kakar was the first one to congratulate her.

During the time when the coronavirus suffering has made everyone depressed, even a little positivity makes everyone happy. One such good news came when Marathi showbiz, Sonalee Kulkarni announced her engagement to the world by sharing multiple photos on social media. This news made her birthday even more special as Sonalee revealed that she and her fiance Kunal Benodekar got engaged on February 2, 2020, before the lockdown was announced but decided to keep it under wraps. As soon as posted the good news on Instagram, a lot of messages and good wishes started pouring in and one amongst those was from her good friend and Bigg Boss 12 winner Dipika Kakar.

Taking to the photo-sharing application, Sonalee shared the beautiful photos in which she can be seen leaning on her fiance's shoulder with a beautiful backdrop. Another one was a family photo with the couple and the third one had the actress holding silverware that had "Sonalee 2\2\2020 Kunal" embedded on it. Captioning those she wrote, "Before my birthday ends, I want to mark it by making a SPECIAL ANNOUNCEMENT!!! Introducing my fiancé Kunal Benodekar!"

Have a look at the dreamy photos here:

Dipika was quick to respond to the photos and commented, "Many many congratulations @18588 stay blessed and happy always." For the unversed, Dipika and Sonalee have been friends since their school days. Not only this, but it was also because of Sonalee that Dipika became an actress. 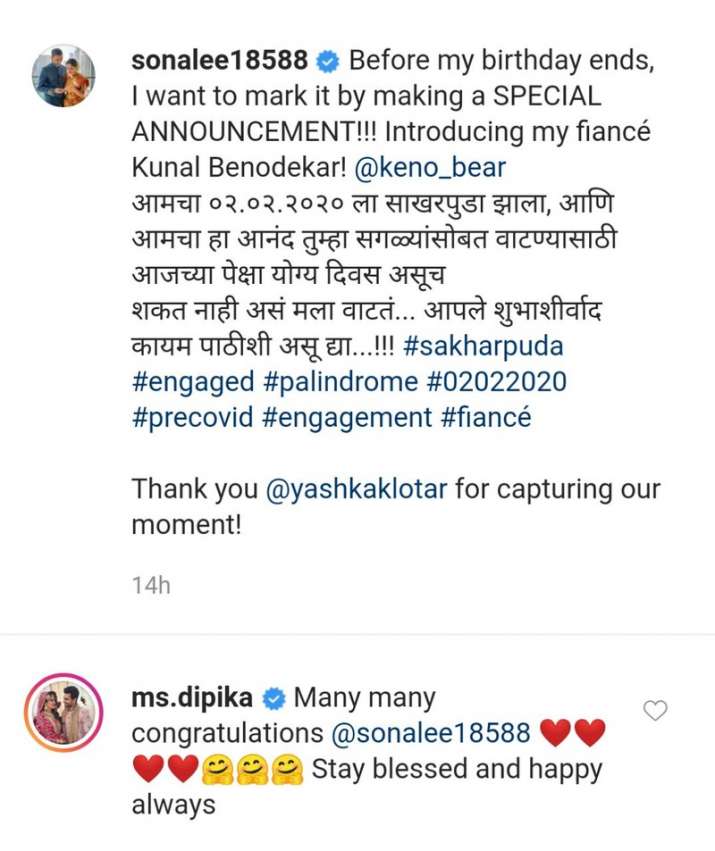 Last year, the 'Sasural Simar Ka' fame, in an interview to Spotboye said, "I was flying for 3 years as an air-hostess but due to my medical issues, I had to quit. Of course, I was flustered as I didn’t have a job. At that time my best friend and classmate, Sonalee Kulkarni, told me that I should not stress so much, after all, flying is a tiring job."

She continued, "She suggested why I don’t try exploring acting on TV. My mother also got excited with the idea. So, she got my portfolio done, shared a lot of contacts with me and helped me in auditions. I would say she is the reason why I became an actress. She shared a lot of email ids and circulated my folio, after which I started getting calls for auditions. Believe me my initial ones were so bad that I myself laugh over them, today."

On the work front, Sonalee has been a part of Marathi films like Gauri and Bakula Namdeo Ghotale. She also made a cameo in the 2010 film Natarang and has done Bollywood films like Grand Masti and Singham Returns.