Kannada actor Chiranjeevi Sarja's fans were left in shock when the actor passed away due to a heart attack on June 6. He complained of breathlessness and chest pain and was rushed to the hospital in Bengaluru on Saturday. While the doctors tried their best to protect him, he died in a private hospital. many celebrities took to social media to express shock and mourn the actor's death. Many remembered his infectious smile and called him a pure soul. Chiranjeevi's close friend and actor Prajwal Devaraj also offered condolences to the family by sharing a screenshot of their last WhatsApp chat.

The photo shows Chiranjeevi asking a bunch of friends for a week-long trip after the pandemic is over. The chat broke fans' hearts as the last message he sent was, "We don't know what's in store for us tom.." A few days after this conversation, the actor died, unfortunately. Hev said, "We should travel for a week… just we guys, relax talk connect over things we have left out and come back." His last wish couldn't be fulfilled and his friends were heartbroken over it. 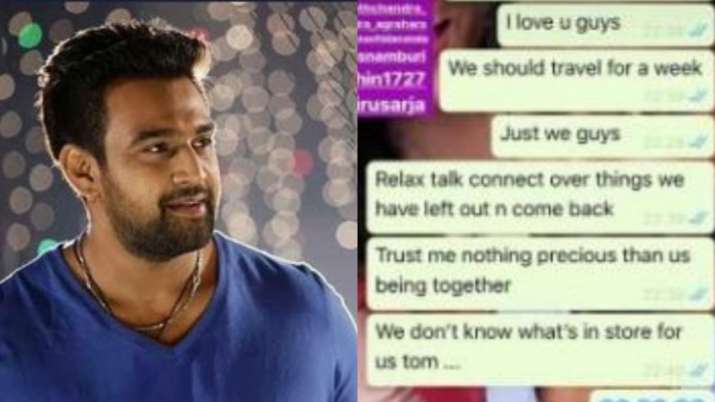 Chiranjeevi Sarja's brother Suraj also shared the last photo the actor shared and revealed that he cannot believe he is gone. He said, "Still can't digest the fact that he is left us and this being last post. Will miss you a lot brother. Just no words to explain." The photo show then and now pictures of the brothers.

Chiranjeevi is survived by wife Meghna raj who is pregnant and is in the second trimester. The duo tied the knot in 2018 in a church followed by a Hindu wedding. The two had known each other for more than 10 years. They had started dating each other five years before they decided to get married.