The romantic comedy film Sonu Ke Titu Ki Sweety was released three years ago on this day. Actors Kartik Aaryan and Nushrratt Bharuccha went down memory lane as they remembered the good times from the film.

The romantic comedy film Sonu Ke Titu Ki Sweety was released three years ago on this day. Lead actor Kartik Aaryan who played the character of Sonu in the film went down memory lane and shared a clip from the film. Taking to his Instagram, he wrote, "Exactly 3 years ago, my life changed!! Thank you Luv sir for Sonu ke Titu ki Sweety."

Actress Nushrratt Bharuccha who played the role of Sweety looked back on her shooting days and remembered the film changed a lot of things for her professionally and helped her grow.

"This film got a tremendous response from the audience, which is super fresh in my mind till now. It was my first film to enter the 100-crore club and I am just too grateful to have been part of it all. It was like a turning point of my career where I feel, I got the recognition that I had worked so hard for," she says.

The film was helmed by Luv Ranjan and also starred Kartik Aaryan and Sunny Singh Nijjar.

"I was very comfortable with Luv sir's style of shooting and working with Kartik and Sunny. We were all just enjoying every bit of the shoot. I really miss that experience and am glad that I had it," Nushrratt adds.

Actor Sunny Singh who played the role of Titu in the film also shared took to his Instagram stories and shared a throwback picture with co- stars, Kartik Aaryan and Nushrratt Bharuccha. 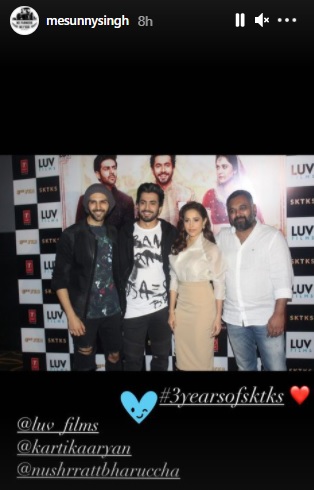 Nushrratt Bharuccha will be seen next in the horror film Chorrii. She also has Hurdang and Janhit Mein Jaari in the pipeline.