Bollywood superstar Shahrukh Khan’s son Aryan Khan, Arbaz Seth Merchant and Munmun Dhamecha have been remanded into NCB custody till October 4. NCB late on Sunday arrested five more youngsters in connection with the rave party busted aboard a luxury cruise liner. They are Nupur Satija, Ishmeet Singh Chadha, Mohak Jaiswal, Gomit Chopra, and Vikrant Chhokar. They will be produced before the honorable ACMM Court tomorrow after their medical.

According to an official statement, "In further development in Cr 94/21, the three accused namely  Aryan Khan,  Arbaz Merchant and Munmun Dhamecha were arrested today on 03-10-2021 u/s 8 (c) r/w section 20 (b), 27, 28 & 29 of NDPS Act and were produced before the honorable holiday court today after their medical. The honorable court granted 1 day NCB custody of the three accused. They will be produced again before the honorable court tomorrow for their judicial custody. Further, remaining 5 accused namely Nupur satija, Ishmeet Singh Chadha, Mohak jaiswal, Gomit chopra and Vikrant Chhokar were arrested later today and will be produced before the honorable ACMM Court tomorrow after their medical." 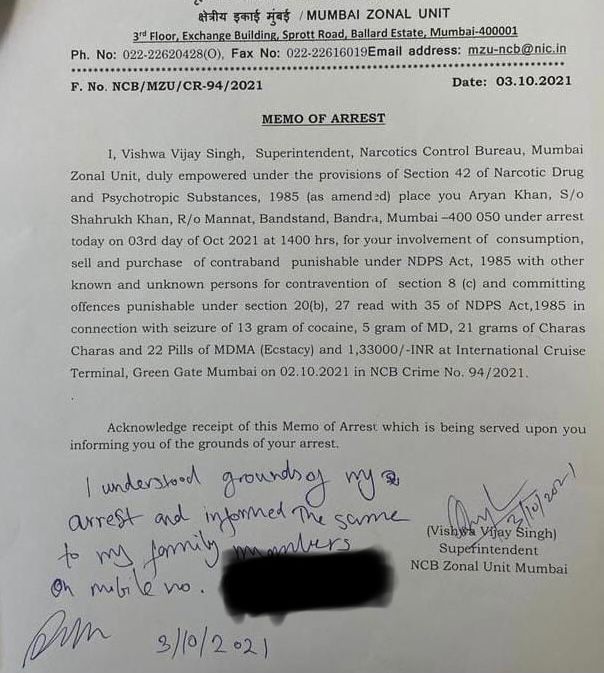 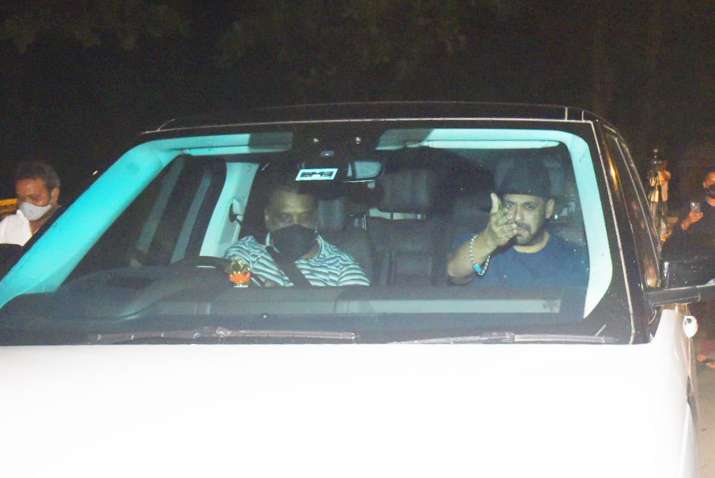 Aryan and two others were earlier arrested after a raid was conducted by Narcotics Control Bureau (NCB) at a party held on a cruise ship off Mumbai coast on Saturday night. Aryan is charged under sections 8C, 20B, 27 and 35 of the NDPS act. Lawyer Satish Maneshinde will be representing Aryan Khan in this matter.

According to a press release by the NCB, the five remaining accused, Nupur Satija, Ishmeet Singh Chadha, Mohak Jaiswal, Gomit Chopra and Vikrant Chhokar were arrested later on Sunday. They will be produced before the Additional Chief Metropolitan Magistrate Court on Monday after their medical examination.

The accused have been arrested in connection with the seizure of 13 grams of cocaine, 5 grams of MD, 21 grams of charas, 22 pills of MDMA( ecstasy) and 1.33 lakhs in cash.

Eight people were detained on Sunday morning including Aryan Khan, the son of Bollywood megastar Shah Rukh Khan and producer Gauri Khan. He was taken to JJ Hospital in Mumbai for a medical check up. "Aryan Khan, Arbaz Seth Merchant and Munmun Dhamecha, who were detained in connection with the raid at a party at a cruise off the Mumbai coast, were taken out of the NCB office for medical examination", reported ANI.

Jurgen Bailom on behalf of Cordelia Cruises in a statement said, "Cordelia Cruises is in no way, directly or indirectly, connected to this incident. Cordelia Cruises had chartered its ship for a private event to a Delhi-based event management company. We condemn all acts such as these and will strictly refrain from letting our ship out for similar events in the future."

He added, "It's a result of a painstaking investigation that went on for two weeks. We acted on specific intelligence inputs, involvement of some Bollywood links has come to light." Among those brought in for questioning to the NCB office in Mumbai include three women, all residents of Delhi.

The operation followed a tip-off on the proposed rave party that was planned aboard a cruise ship bound on a Mumbai-Goa voyage, setting sail from the International Cruise Terminal, Mumbai.

According to the NCB sources, drugs including cocaine, ganja, MD and other intoxicants were recovered from the party.

In a conversation with ANI, NCB Chief S N Pradhan said that further action will be taken based on whatever inputs are received from the detainees. "The proceedings were already taking place. We are constantly gathering intelligence. We took action once the inputs that we received were confirmed.

Wherever information is received, action will be taken and it does not matter with whom there is a connection. Our aim is a drug-free India," Pradhan said.

Actor Suniel Shetty also came forward and has urged people to wait for the truth to come out. "When a raid is conducted at a place, many people are taken into custody. We assume that a particular boy must have consumed it (drugs). The process is on. Let's give that child a breather. Let real reports come out," Suniel said.

To avoid detection, the NCB sleuths booked themselves on that cruise as ordinary passengers and they soon found some of their co-passengers consuming drugs. Then the NCB launched its full-scale raid, detained eight passengers, including two women, consuming drugs, and seized different types of narcotics in varying quantities.

Simultaneously, the cruise ship was ordered to turn and sail back to the ICT at Ballard Pier where the detained passengers were offloaded along with their baggage. A comprehensive search of their belongings as also the cruise ship is being carried out, while the detainees were sent for a medical examination.

(With IANS and ANI inputs)