Rani Mukerji is back with Mardaani 2 and in this second instalment of the 2014 franchise, she will be seen reprising the character of Shivani Shivaji Roy. Like the first instalment, makers have introduced a new actor as the nemesis of Rani. For unversed, makers didn't disclose the name of Tahir Raj Bhasin until the film released. A similar promotion strategy was adopted in Mardaani 2 where the baddie's name was kept under wrap. Now, as the film has hit the screens, there is a lot of buzz around the new villain of B-town.

In Mardaani 2, Vishal Jethwa plays the rapist-killer. The young actor who has already been seen in several TV shows has made his Bollywood debut with YRF film. Mardaani 2 has been received well by critics and positive reviews are pouring. However, there's a need fo special mention for the antagonist, who has left everyone impressed with his power-packed performance. India TV critic Sonal Gera writes, ''there is one person who takes all your breath away -- the clean-faced antagonist, played by Vishal Jethwa. He is a revelation, a person one would instantly fall in hate with. Vishal's Sunny is conniving, unbelievably clever and believably evil. He rapes women before mercilessly killing them. Because, ego''. Click here to read the full review.

Earlier, in an interview with indianexpress.com, Rani praised Vishal without revealing much about him. ''I think that is the strategy that they (producers) have probably taken. He is amazing in the film. He is going to shock a lot of people with his talent. He’s done an exceptional job. And I am sure that people are going to be very excited to know who he is after they watch his work,'' the actress said. 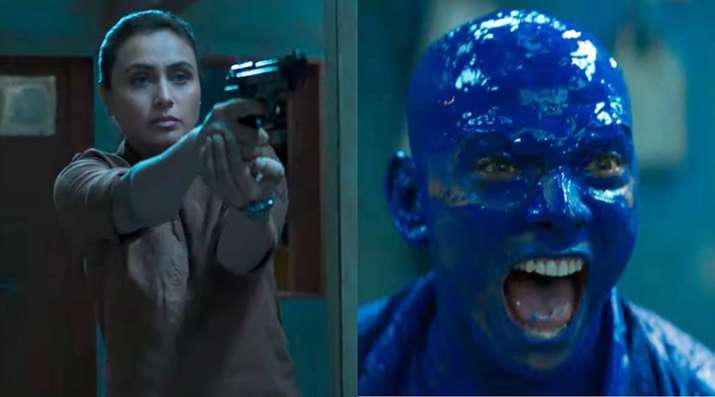 The 25-year-old actor raised in a Gujarati family, made his acting debut with 2013 show Bharat Ka Veer Putra: Maharana Pratap. While Faisal Khan played the lead, Jethwa played the parallel lead of King Akbar. He then played Bali in Sankatmochan Hanuman and Nasir in Peshwa Bajirao. However, he shot when he played a terrorist, Chota Packet in popular serial Diya Aur Baati Hum. Later he was seen in Thapki Pyaar Ki as Prince Shekhawat.

Vishal is an avid TikTok user. His videos mostly feature his friends Bhavesh Balchandani, Jannat Zubair, Avneet Kaur and Aashita Bhatia. He has also started his You Tube channel a year back, where he has uploaded his dance performance footage.

However, Vishal is keeping a low profile since past few months. Most of his social media accounts are now locked. This is because makers didn't want anything related to Mardaani 2 to be revealed.

This has been one of the finest films I have worked on! Casting a film with Rani is always a tough task- ones gotta always be up to the mark! I loved watching every second of it. It makes you feel like you’re a part of the film in every frame! Rani is Rani! The queen! She has killed it with the most effortless performance. Vishal has been my best find ever! One can not believe that this is his first film! He makes me very very proud! @vishaljethwa06 Gopi! I love you! You have really made this film in the most sensitive way possible! Justice done! Bravo! @gopiputhran My whole cast shines through. Thank you to each and everyone of you! #jishusengupta #kcshankar #sumitnijhawan #deepikaamin #rajeshsharma #prasannaketkar #avneetkaur #vikramsinghchauhan #shrutibapana #vishalsudarshan A big round of applause to my WHOLE cast and crew!!! Please go watch it guys! Thank you to my casting team! @mohitchandora I love you for being the captain of my ship! #ranimukerji #vishaljethwa #gopiputhran #yrf #mardaani2 @mardaani2 @yrf @shanoosharmayrfcasting