Kartik Aaryan is these days basking in the success of his recently-released Netflix-thriller 'Dhamaka.' The actor, who recently turned 31 made Bhumi Pednekar share a new birthday message for him as he accused him of copying Diwali message. Here's what he asked Farah Khan to do.

Bollywood actor Kartik Aaryan celebrated his birthday on Monday. On his special day, friends, fans and admirers have taken to their social media handles to pen heartfelt notes for him. Well, the actor made sure to reply to the birthday wishes in his own style. He accused his 'Pati, Patni Aur Woh' co-star Bhumi Pednekar of copying the Diwali message for his birthday wish. On the other hand, he funnily asked Farah Khan for work while thanking her for the wishes.

Responding on it again, Bhumi wrote, "Happy birthday to the most dhamaakedaar co-star/insaan I know. Aapka sense of humour aur hasi hamesha barkarar rahe. In short dhudho nahao puto falo (may your sense of humour and smile be forever. in short, be prosperous)." 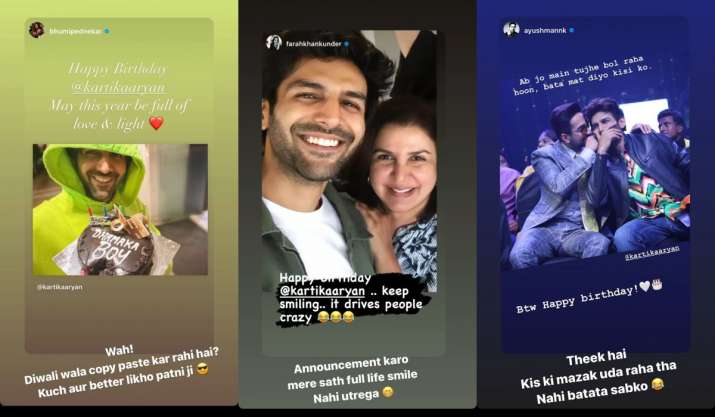 Kartik Aaryan, who made his debut in the industry with 'Pyaar Ka Punchnama' recently turned 31. On his Birthday, Kartik shared a quirky post for his fans and well-wishers and asked them to wish him twice. The caption showed his excitement for his birthday as he wrote alongside, "Phir se birthday aaya Phir se khushiyan laaya Sab 2-2 baar wish karo mujhe !!"

On the professional front, Kartik Aaryan is these days basking in the success of his recently-released Netflix-thriller 'Dhamaka.' The film also stars Mrunal Thakur in a pivotal role. Directed by Ram Madhvani, 'Dhamaka' follows the story of an ambitious ex-news anchor Arjun Pathak, played by Kartik, who is given another chance to go live on prime-time television when a terrorist calls him with a bomb threat. Little does he know that this call will change his life and throw him into a fast-paced game of betrayal.