On the occasion of Amitabh Bachchan's 79th birthday, Aishwarya Rai Bachchan who is known for her social media posts shared a lovable picture of Senior Bachchan posing with Aaradhya Bachchan for the camera. Not just this but she even penned down her and the little girl's wish in the caption. She recently returned to Mumbai from Paris & Dubai where she went to attend the Paris Fashion Week.

Bollywood megastar Amitabh Bachchan turned 79 on Monday. On the special occasion, congratulatory wishes poured in over social media from not just his fans but also industry counterparts. Even his actor-son Abhishek Bachchan penned down a note for his father alongside a video he shared. Well, going by the tradition, Big B's daughter-in-law Aishwarya Rai also shared her birthday greeting late at night. For the unversed, the actress is known to share wishes on special occasion late but before the beginning of a new day. Sailing in the same boat, Aish shared a lovable picture of Senior Bachchan posing with her daughter Aaradhya Bachchan for the camera. Not just this but she even penned down her and the little girl's wish in the caption.

Aishwarya's post was made on Instagram and the caption alongside the same read, "Happy happy birthday dearest darling Dadaji-Pa. Love you forever and beyond."

Meanwhile, Abhishek's birthday wish for Big B read, "My hero, my idol, my friend, my father! Happy birthday, Dad. Love you."

The trio Abhishek, Aishwarya and Aardhya went to Paris and Dubai and even attended the Paris Fashion Week, where Aishwarya was one of the showstoppers. They returned to Mumbai from Paris in the wee hours of Monday, right in time for Amitabh's birthday. 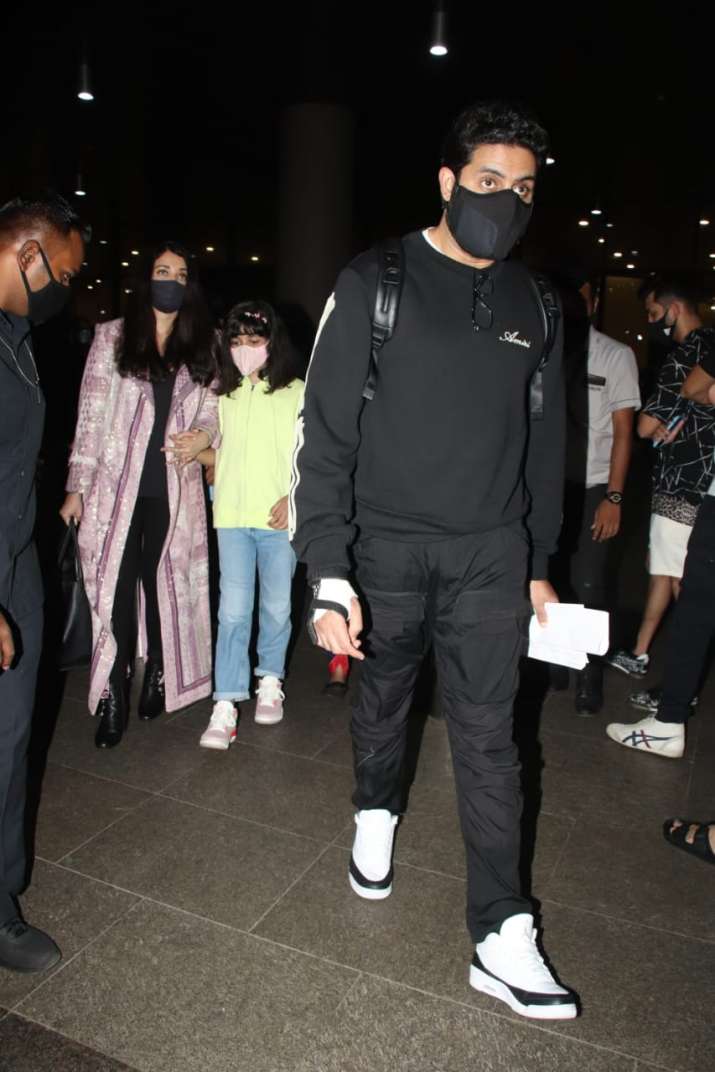 Just like every year, fans gathered outside Jalsa to see a glimpse of Big B on his birthday. Not only did he wave to everyone but even shared a thank you note for his fans and followers on the photo-sharing application. He wrote, "My gratitude for the love you give me. I shall never be able to repay it. Nor shall I ever be able to fathom your affection. Your greetings today have been immense. I cannot respond to all of them, but I do hold them close here and wish that you take this humble presence here on Instagram as my response."

On the professional front, Big B who was last seen in Chehre will next be seen in a couple of projects including-- Ajay Devgn’s 'Mayday,' Jhund, Brahmāstra, Good Bye, Uunchai and Nag Ashwin's untitled project. Abhishek, whose last project was 'The Big Bull' will next be seen in 'Bob Biswas', which is based on the fictional character of the same name that became popular in the 2012 Vidya Balan's hit movie 'Kahaani'. He also has 'Dasvi' in his kitty.

Speaking about Aishwarya, she will be next seen in Mani Ratnam's directorial 'Ponniyin Selvan'. As per viral reports and speculations, she might also be seen in Anurag Kashyap's directorial 'Gulab Jamun', co-starring her actor-husband Abhishek.