Saroj Khan was admitted to Guru Nanak Hospital at Bandra in Mumbai on June 17 after complaining of breathing issues. Her daughter Sukyna Khan informed that her mother has tested negative for Covid-19 and, said that the breathlessness was caused due to cold. Furthermore, she added that Saroj Khan is likely to be discharged from the hospital in the next two to three days.

Saroj Khan, who began working as a background dancer at the age of three, got her first break as an independent choreographer with Geeta Mera Naam in 1974. The three-time National Award winner has been credited with choreographing over 2000 songs, including iconic numbers such as Hawa Hawai from Mr India (1987), Ek Do Teen from Tezaab (1988), Dhak Dhak Karne Laga from Beta (1992) and Dola Re Dola from Devdas (2002). 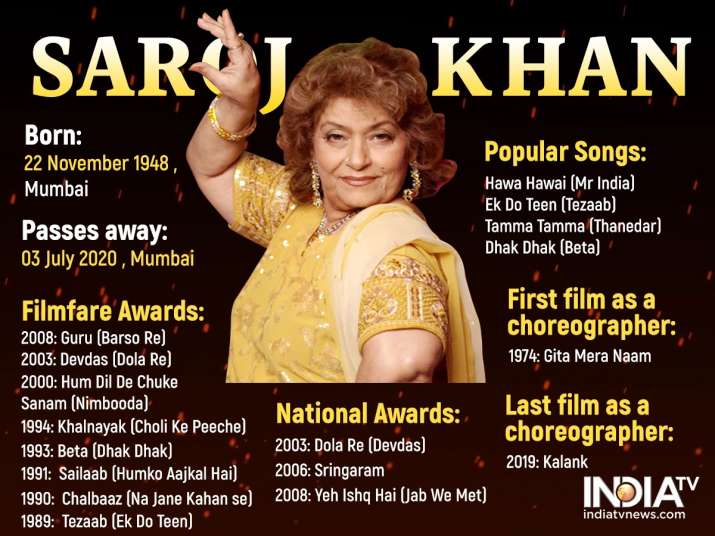 On behalf of Sarojji's family, her daughter Sukaina Khan conveyed her gratitude to each and everyone who has expressed their condolences. She has also clarified that given the current COVID-19 crisis, there will be no prayer meeting. A gathering to celebrate Masterji's life will be held at a later date when the pandemic situation is under control.

Thank you for all your messages and for keeping Mummy in your prayers. Given the current COVID-19 situation, there will be no prayer meet. Whenever the situation improves, we will meet and celebrate the life of Saroj Khan. 🙏

The body of Saroj Khan is taken to the Ahle Sunnat cemetery in Malad. Family members have reached the cemetery.

Burial to take place in the cemetery near Malad Chowki today.

(With inputs from Joyeeta Mitra Suvarna)