Taking to Instagram, Arjun Kapoor shared a picture of a yummy dessert on his story, specially made for him by his ladylove Malla aka Malaika Arora!

For those couples who are staying together amid the coronavirus lockdown, it's definitely a blessing in disguise. Especially Bollywood couples, who generally do not get sufficient time during their regular time to spend quality time with their loved ones. Sailing in the same boat are lovebirds Arjun Kapoor and Malaika Arora who are quarantining together in the difficult times. Not just the two are sharing advisories to their fans to stay home, but are also sharing updates of what they are up to during the free time. Yet again, the actor shared an update about his love life on social media which is enough to make you jealous in case you are away from your boyfriend/girlfriend.

Taking to Instagram, Arjun shared a picture of a yummy dessert on his Instagram story, specially made for him by his ladylove Malla! Captioning the same, he wrote a short and sweet thing which was nothing but 'her' written along with a heart emoji. Looks yummy is in his tummy now. Have a look at what the diva made for her boyfriend during quarantine: 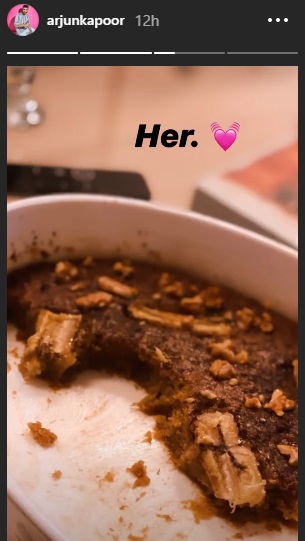 Previously the two also came out to cheer up for the corona warriors and were seen clapping in their balconies.

The two have been gaining limelight even since their public announcement about their relationship. They have been spotted quite a lot of times during their dinners, and vacations to exotic locations. Before Arjun, Malaika was earlier married to Arbaaz Khan whom she divorced in 2017.

On the work front, Arjun will next be seen in "Sandeep Aur Pinky Faraar". The film is directed by Dibakar Banerjee. The film also stars Arjun's "Ishaqzaade" co-star Parineeti Chopra.