Sanjana Sanghi took to her Instagram stories to share that the December schedule of the film shoot has been wrapped. The 'Dil Bechara' actor shared a still from the sets of the film featuring herself and her co-star Aditya Roy Kapur.

"As 2020 wraps, so does our most precious & invigorating December schedule. Grateful #OmTheBattleWithin," the 24-year-old actor wrote in the caption. Have a look at the post here: 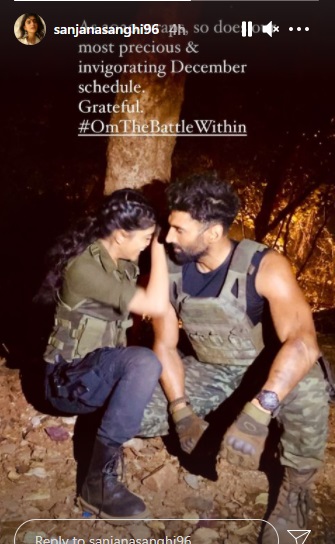 The shooting for the action-thriller had commenced earlier this month. Filmmaker Ahmed Khan announced the news of the 'Aashiqui 2' actor to be cast in the new film on the latter's 35th birthday, which is scheduled to be directed by Kapil Verma and co-produced by Khan, his wife Shaira Khan and Zee Studios.

'Om: The Battle Within' will mark the directorial debut of action director Tinu Verma's son Kapil.