As filmmaker Sanjay Leela Bhansali completed 25 years in Bollywood, actress Deepika Padukone congratulated him with a heartfelt note on Instagram. The actress credited her success to SLB and said 'I wouldn't be half the person I am today if it wasn't for you.'

Bollywood filmmaker Sanjay Leela Bhansali completed 25 years in showbiz. The filmmaker has directed many iconic Hindi films including Padmaavat, Bajirao Mastani, Hum Dil De Chuke Sanam and others. As he hit a milestone in his career, actress Deepika Padukone congratulated him with a heartfelt note on Instagram. The actress credited her success to SLB and said 'I wouldn't be half the person I am today if it wasn't for you.'

Deepika Padukone said, "9th NOVEMBER 2007. My debut film Om Shant Om was pitted against Sanjay Leela Bhansali's Saawariya. And as grateful as I was (And I still am... I cannot think of another female actor who has been launched in the same manner as I was), I also remember thinking to myself at the same time, that I would never be good enough..to be a Sanjay Leela Bhansali muse."

Fast forward to 2012. I was extremely unwell and laid up in bed. I received a call from my management saying ''Sanjay Leela Bhansali wants to meet you''. I said, ''What?!. They said, ''Yes! He is doing a film and you really like to meet you''. ''I would do cartwheels to go and see him right away, but I can't get out of my bed right now!'' I said. The next thing I know, he was on his way to see me!

What ensued in the years that followed was nothing short of an 'iconic partnership' I believe. And together we've created 'iconic characters'. Characters that have been etched in the minds and hearts of people forever!," she added.

She concluded by saying, "What I cherish even more though is the influence our collaboration has done on me personally. I say this without a shadow of a doubt that I wouldn't be half the person I am today if it wasn't for Sanjay Leela Bhansali!" 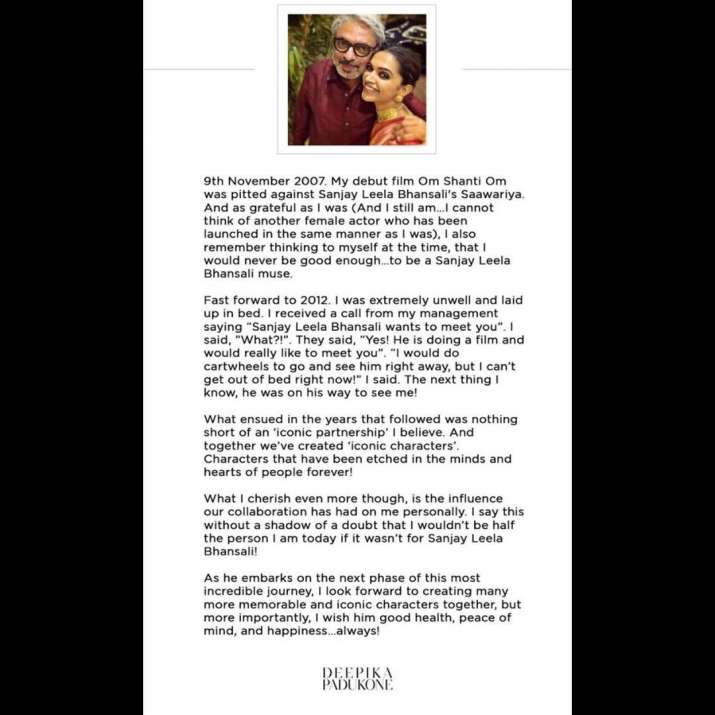 Bollywood stars like Ranveer Singh, Ajay Devgn, Salman Khan and others also congratulated the filmmaker by sharing a video on his glorious journey. Devgn wrote, "Hey Sanjay, Congratulations on your silver jubilee. Your contribution to films is unparalleled. And, I love working with you because your passion & dedication is infectious. Will keenly await several more milestones that are meant for you."

Meanwhile, Sanjay Leela Bhansali is gearing up for the release of his next film Gangubai Kathiawadi starring Alia Bhatt. The actress even shared an Instagram post for the director and wrote, "25 years of the magician & his magic. Love you sir."

Speaking about the Dabangg superstar, he shared a video on his Instagram handle and wrote, "25 Years of SLB Congratulations Sanjay on completing 25 glorious years .. @bhansaliproductions @#25YearsOfSLB #SanjayLeelaBhansali."