Filmmaker Mahesh Bhatt celebrated his 70th birthday on Thursday with his family including daughters Alia Bhatt, Pooja Bhatt and Shaheen Bhatt. While his girls shared some really adorable pictures with their dad, actress Rhea Chakraborty also wrote something special for the filmmaker. She shared a series of pictures on her Instagram and wrote, “Happy birthday to my Buddha @maheshfilm. Sir , this is us - you held me with love , you showed me love , and you have unclipped my wings forever , you are the "heart hitting " fire that ignites every soul it comes by ! Words fail me I love you”

The pictures in which the Jalebi actress can be seen hugging Mahesh Bhatt, caught many eyeballs on the internet. Many believed that the 26-year-old actress is dating the 70-year-old filmmaker. Many trolls asked Rhea Chakraborty if she was having an affair with the director. 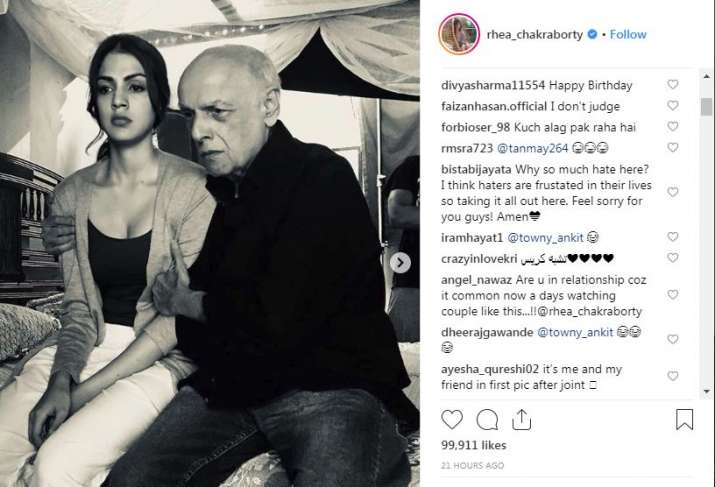 Rhea Chakraborty is featuring in lead role in Jalebi opposite Varun Mitra. Directed by Pushpdeep Bhardwaj, the romantic drama is produced by Mukesh Bhatt.

On the other hand, Alia Bhatt announced Sadak 2 on the occasion of her father’s 70th birthday. Sadak is a 1991 hit film directed by Mahesh Bhatt, starring Sanjay Dutt and Pooja Bhatt. The sequel will be joined by Alia and Aditya Roy Kapur.