Anushka Sharma is 'back to Zero' with a flowery welcome from Shah Rukh Khan. See pics.

Shah Rukh Khan had the sweetest surprise for his Zero co-star Anushka Sharma.

Bollywood actress Anushka Sharma, who recently got hitched to beau Virat Kohli, is back in India. After spending quality time with husband and Indian skipper Virat Kohli in South Africa, the actress made a return to homeland on Sunday. Anushka Sharma will start promoting her upcoming film Pari and resume shooting for Zero with Shah Rukh Khan and Anand L. Rai. Coming back to India, the actress was surprised with beautiful flowers by her co-star Shah Rukh Khan, on the sets of Zero.

In a heart-warming gesture, Shah Rukh Khan and entire team of Zero surprised the actress with a cutesy flower bouquet and some pictures of her with husband Virat Kohli. She took to Instagram to express gratitude towards her co-stars. In an Instagram story, she wrote: Great to be back on set. Thank you for this floral welcome guys. Lot of love. 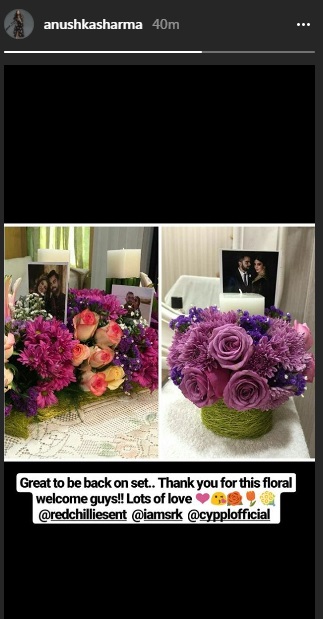 Later, Anushka Sharma shared a happy picture from the sets of her upcoming film Zero. In the picture, the actress is sitting with a cup of coffee and smiling back at the camera. She wrote: They say - Back to one! In this case ill say - Back to Zero !! Happy to be back on the film and back to work with my lovely co actors and crew !! Thank you for the beautifully decorated floral van

According to reports, Anushka Sharma was ready to cut short her personal time with hubby Virat Kohli for her work commitments. But it was the director and the entire team of Zero advised the actress to take her time and enjoy her honeymoon period to the fullest. It was also reported that Shah Rukh Khan didn’t sign any other projects till he wraps up the shooting of Zero. He was waiting for Anushka Sharma to get back and resume shooting for his upcoming dwarf film.

Anushka Sharma and Shah Rukh Khan’s film Zero is scheduled to release in December 2018. It is going to clash with Abhishek Kapoor’s Kedarnath which is also releasing on the same date. Zero has Anushka Sharma, Shah Rukh Khan and Katrina Kaif in lead roles. A week ago, the first look of the film was out.