Latest Bollywood News and Updates February 10: Bollywood’s most romantic couples Deepika Padukone- Ranveer Singh and Priyanka Chopra- Nick Jonas have given us major couple goals yet again. Deepika Padukone had the sweetest reaction for husband Ranveer Singh’s post who is currently attending the Berlin Film Festival 2019 along with co-star Alia Bhatt and director Zoya Akhtar as their film Gully Boy is being premiered there. On the other hand, Priyanka Chopra and Nick Jonas are enjoying their marital bliss to the fullest. A picture of Bollywood beauty Priyanka Chopra and husband Nick Jonas has gone viral on the internet from their wedding, in which the duo has seen performing the ‘garter tradition’. Also, Sacred Games actress Surveen Chawla shared a number of pictures from her magical baby shower in which she is seen enjoying with her girlfriends.

Deepika Padukone and Ranveer Singh never fail to excite their fans with their adorable PDA on social media. From promoting each other’s film by delivering the popular dialogues to commenting on each other’s pictures with heart emojis, the couple gives enough reasons for their fans to fall in love with them again and again. This time as well, just when Ranveer Singh shared a funky picture on his Instagram from the Berlin Film Festival 2019, Deepika left a comment on it and made us go starry-eyed.

Ranveer Singh, who is currently attending the Berlin Film Festival 2019 along with co-star Alia Bhatt and director Zoya Akhtar as their film Gully Boy is being premiered there, is treating fans with various quirky looks from there. His latest look included a sexy powder blue fury jacket with many funky patches on it and while fans loved the look, loving wife Deepika Padukone couldn’t stop herself from claiming is look to be her favorite. Deepika wrote, "one of my most favourite looks!!' She also dropped in the heart-eyed emojis all over! Check out her comment here- 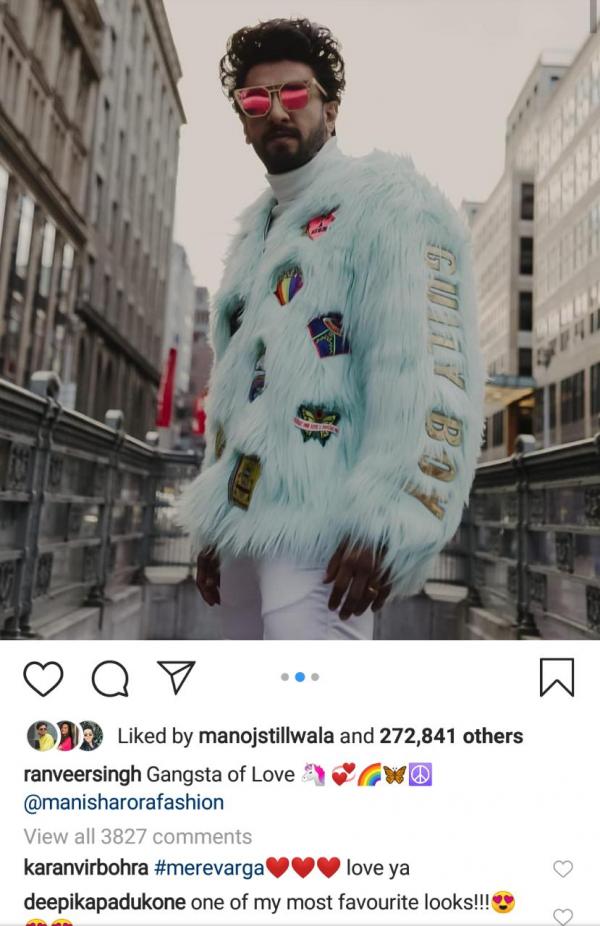 Priyanka Chopra and Nick Jonas are enjoying their marital bliss to the fullest. The couple keeps teasing their fans with adorable pictures from their vacations and leaves them wanting for more. Recently, when Priyanka shared a romantic picture of herself sleeping in the arms of husband Nick Jonas, it went viral on the internet like wildfire. While it’s been two months that the couple is married, the fans are still not over their dreamy wedding pictures. It won’t be wrong to say that the couple’s wedding was a gala event and the picture was even more dreamy than the wedding itself.

Another picture of Bollywood beauty Priyanka Chopra and husband Nick Jonas has gone viral on the internet from their wedding, in which the duo has seen performing the ‘garter tradition’. It is the tradition in which the husband takes off the wife’s garters or to say, stocking/lace band, while the others overlook. The garter is then tossed for all the eligible bachelors at the wedding after the bride tosses the bouquet. In the picture, Priyanka Chopra is seen seated on a chair while Nick tries to take off her garter. Check out the pictures here-

Bollywood actor Anil Kapoor says the more people will contribute towards the society, the more they will get back in return in their lives. "You should contribute to the society and the country as much as you can... you will get happiness, success and peace of mind," he said here on Saturday while interacting with the media after inaugurating TATA Memorial hospital's pediatric oncology ward.

Sharing his thoughts after attending the inauguration of the hospital's ward, Kapoor said: "Earlier also, I have come in this hospital and I am feeling really happy with the kind of positive change I am seeing here."

Surveen Chawla is a popular name in the world of television and Bollywood. The actress has proved her acting mettle in a number of movies like Hate Story 2, Ugly, Parched and became a household name with her appearance in web series Sacred Names. As much as she has earned in her professional life, the actress is now enjoying marital bliss along with being pregnant. Surveen Chawla is expecting her first child and the actress even shared an adorable picture of her baby bump on her Instagram. While fans were still cherishing the adorable picture, the actress took to her social media to share pictures from her baby shower as well.

So much love and more for the little heart ❣... @iammuskaanp @gazala24

Hina Khan has become a fashion inspiration for many after she appeared on reality show Bigg Boss 11. While she couldn’t win the show, her style statement won many hearts and she even got applauded for the same. Hina keeps treating her fans and admirers with funky looks through her social media and recently when she appeared at Daboo Ratnani’s 2019 calendar launch, she was dressed to kill. However, the Instagram account, who considers themselves as Fashion Police, Diet Sabya trolled the actress for wearing the same outfit as worn by Nora Fatehi and Bebe Rexha.

While posting the picture of the three celebrities in the same outfit, Diet Sabya write, “Spot the fake.” In the picture, the three beauties are seen wearing the same neon pink dress. Hina also shared a number of pictures of her outfit saying, “The colour pink makes everything look pretty.” Check out her pictures here-

Just like Divyanka Tripathi, Hina Khan was also not ready to be trolled by Diet Sabya. She gave a befitting reply to the #GandiCopy post by Diet Sabya in her live chat recently. Hina was accompanied by her boyfriend Rocky Jaiswal for the live chat and the duo in a subtle manner explained how when a celeb steps out, it is an effort of an entire team and that taking inspiration from an international designer does not mean copying them. Watch the video here-