West Bengal and Assam on Saturday voted for the first phase of Assembly Elections 2021. The polling began at 7 am and concluded at 6 pm for 30 seats in West Bengal and 47 seats in Assam, amid tight security, officials said.

West Bengal and Assam on Saturday voted for the first phase of Assembly Elections 2021. The polling began at 7 am and concluded at 6 pm for 30 seats in West Bengal and 47 seats in Assam, amid tight security, officials said. More than 73 lakh voters were eligible to exercise their franchise to decide the fate of 191 candidates in Bengal, most of which are located in the once-Naxal-affected Jungle Mahal region. In Assam, 264 candidates, including 23 women, were in the fray in the first phase. Bengal elections are being held in 8 phases while Assam in 3 phases. The counting of votes will be held on May 2.

"The two BJP workers were removed from the booth when we protested and called media persons. Central forces are working in a biased manner," a TMC worker alleged. "We are here to ensure that EVMs are protected," said a BJP worker.

05:20 pm: Bengal has registered nearly 80 per cent voting till 5:20 pm while Assam has recorded 72 per cent, in the ongoing first phase of assembly elections. 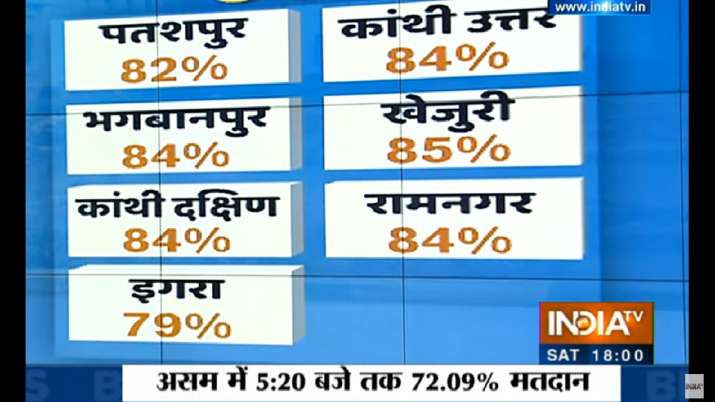 05:00 pm: In the audiotape that I played now, state CM is seeking help from a BJP (Nandigram) district vice-president and requesting him to return to TMC. This shows that she has realised that TMC is losing the election, Shishir Bajoria, BJP.

02:21 pm: 45.24% and 54.90% voter turnout recorded till 2 pm, in the first phase of polling in Assam and West Bengal Assembly elections, respectively: Election Commission of India

01:16 pm: 37.06% and 40.73% voter turnout recorded till 1 pm, in the first phase of polling in Assam and West Bengal Assembly elections, respectively: Election Commission of India

12:32 pm: The new system is not acceptable to us. We demand that from the next phase the polling agent must be local of the concerned polling booth. CEO has assured us to look into the matter: TMC's Sudip Bandyopadhyay

12:29 pm: A delegation of TMC leaders met Chief Electoral Officer in Kolkata. Sudip Bandyopadhyay says, "BJP had submitted a memorandum requesting to change the system of appointing booth agents wherein he must be a voter of the concerned booth and allow anybody at any booth"

11:54 am: BJP candidate from West Midnapore Samit alleges Trinamool Congress is creating disturbances in the rural areas of the district as voting in the first phase of Assembly polls is underway. Das cast his vote at a polling booth in the West Midnapore district in the state. "Voting in Midnapore town is going on smoothly. But, at some places in rural areas, TMC workers are trying to create a disturbance," Das said

11:51 am: Assam: Congress' Rockybul Hussain casts vote at a polling booth in Amoni

11:42 am: TMC knows that it is losing and that's why it is saying all this. For such complaints, TMC should go to the Election Commission. TMC and Mamata Banerjee are under pressure and that is why they are saying such things: BJP West Bengal Pres Dilip Ghosh on TMC alleging rigging of polls

11:28 am: 24.48 and 24.61% voter turnout recorded till 11 am, in the first phase of polling in Assam and West Bengal Assembly elections, respectively: Election Commission of India

11:21 am: Assam CM Sarbananda Sonowal casts his vote a polling centre in Dibrugarh

11:04 am: Congress leader Gaurav Gogoi casts his vote at a polling booth in Jorhat

09:34 am: 8.84% and 7.72% voter turnout recorded till 9 am, in the first phase of polling in Assam and West Bengal Assembly elections, respectively: Election Commission of India

09:28 am: Violence reported at a polling booth in West Bengal's Salboni

09:25 am: TMC will win Bengal. Bengal's daughter will defeat Bengal's traitor in his own backyard at Nandigram, members of tourist gang will continue to do what they do best - try & destroy institutions in India. Women in Bengal will continue to wear sarees any way they want: Derek O'Brien

09:07 am: He later went there again & met people. We approached EC that there should be free & fair polls. People will choose whom they want. TMC is scared. We've given name of one Alauddin to EC, he creates disturbance there: Soumendu Adhikari, BJP leader & brother of Suvendu Adhikari

08:56 am: Voters being influenced and stopped from voting at booth number 149. Overall polling being held peacefully. EVMs malfunctioning at some locations, it happens in all polls, EC is looking into it: Soumendu Adhikari, BJP leader and brother of Suvendu Adhikari

08:45 am: Voting underway at booth number 67A in Patashpur assembly constituency, East Midnapore

08:24 am: Temperature of voters being checked, arrangement of masks, gloves, and hand sanitiser made at a primary school - designated as a polling booth - in Lahowal Assembly constituency of Dibrugarh

07:45 am: Voting underway at a polling centre in Purulia for the first phase of West Bengal Elections 2021.

07:43 am: Voting underway at Kechanda Part Basic School in Jhargram.

07:32 am: A long queue of voters at a polling centre in Rupahi, Nagaon District

07:23 am: Assam: Voters waiting in a queue at a polling station in JP Nagar, Dibrugarh

07:18 am: Voting underway at a polling centre in West Midnapore

07:09 am: West Bengal: First phase of polling begins in Jhargram

07:05 am: Assam: Voters stand in a queue outside a polling booth in Dibrugarh 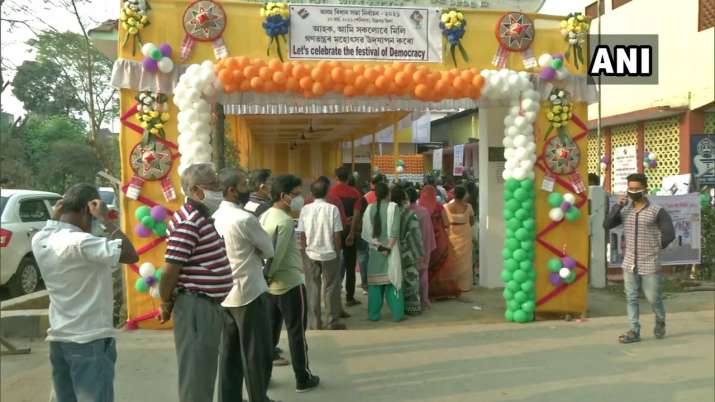 06:54 am: Assam: Voters queue outside a polling station in Nagaon

06:51 am: Assam: Preparations underway at a polling station in Rupahi, Nagaon district

06:49 am: We've 509 vulnerable booths in our district. We've deployed 169 companies. We're monitoring booths with CAPF and non-CPF measures. Over 50 per cent of polling booths have a webcasting facility and CCTV, videographer. We've 800 micro-observers for phase 1: District Election Officer, East Midnapore

06:43 am: West Bengal: Preparations underway at a polling booth in East Midnapore

The elections in West Bengal are being held following COVID-19 guidelines in all nine seats in Purulia, four in Bankura, four in Jhargram and six in Paschim Medinipur, besides the seven seats in high-stakes Purba Medinipur -- the home turf of BJP leader Suvendu Adhikari.

The elections, which will continue till 6 pm, are being held amid tight security with the Election Commission deploying around 730 companies of central forces, guarding 10,288 polling booths housed in 7,061 premises, officials said.

Each company of the central forces consists of 100 personnel, they said. Besides, 22,092 state police personnel have also been deployed at strategic locations, they added. Long queues were seen outside many booths even before polling began with people stepping out early to avoid the sweltering heat, besides the uncertainty of being able to cast their votes in case of violence later in the day.

Most of the voters and political party workers were seen without masks amid a resurgent coronavirus. In some booths, the voters were provided masks, while santisers were made available at all the locations.

The Trinamool Congress is contesting 29 of the 30 seats while supporting an Independent in the Joypur assembly segment in Purulia as the nomination of its official candidate Ujjwal Kumar was rejected by the EC due to a discrepancy.

The BJP is also contesting 29 seats and backing ally AJSU Party of Jharkhand in Baghmundi. The Left-Congress-ISF alliance has put up candidates in all 30 seats, even as there are "friendly fights" in some.

Of these 30 seats, 27 were won by the TMC in the 2016 assembly elections, the Congress bagged two and RSP one. However, the equations changed in 2019 with BJP making massive inroads in the tribal-dominated Jungle Mahal region, winning all five Lok Sabha constituencies -- Purulia, Bankura, Jhargram, Medinipur and Bishnupur.

West Bengal has been caught in the throes of violent political clashes between the TMC and BJP supporters which have claimed several lives on both sides over the last few days, prompting the Election Commission to deploy such a massive number of central forces. Tension was palpable at Tulsidi village in Purulia's Bandwan as an election vehicle was set on fire hours before the polling began. Forces are at present keeping a close vigil in the area, surrounded by forests that were once the hideouts of Maoists, officials said.

Altogether 264 candidates, including 23 women, are in the fray in the first phase polling in Assam. A total of 300 companies of security forces have been deployed in the first phase, in which people are voting at 11,537 polling stations across 12 districts of Upper Assam and the Northern Bank of Brahmaputra.

Patrolling has been intensified and strict vigil is being kept in all the vulnerable areas, officials said.

Most of these 47 seats are witnessing a triangular contest between the ruling BJP-AGP alliance, the Congress-led opposition grand alliance and the newly-formed Assam Jatiya Parishad (AJP).

The polling would continue till 6 pm. A significant turnout was seen at several booths as the poll began with many choosing to vote early. Special measures were taken for People with Disabilities (PwD), including the provision of wheelchairs at every polling station and e-rickshaws for their commute.

The ruling BJP is contesting 39 seats and its partner AGP 10. The two allies are engaged in "friendly contests" in Lakhimpur and Naharkatiya constituencies.

The opposition grand alliance is contesting all the seats, with the Congress putting up candidates in 43, and the AIUDF, CPI(ML-L), RJD and Anchalik Gana Morcha (contesting as Independent) in one each.

Chief Minister Sarbananda Sonowal is trying his luck from Majuli (ST), Speaker of the outgoing assembly Hitendranath Goswami is fighting the elections from Jorhat.

Titabor, another high-profile seat that was held by former chief minister Tarun Gogoi of the Congress for four successive terms, is witnessing a direct contest between Bhaskar Jyoti Barua of the Congress and former MLA Hemanta Kalita.

Activist and Raijor Dal leader Akhil Gogoi, in jail for his alleged role in the violent anti-CAA protests, is contesting as an Independent from Sivasagar. AJP president Lurinjyoti Gogoi is contesting from Duliajan and Naharkatiya.

Most voters were seen wearing masks amid a resurgent coronavirus, while those arriving without one are being provided at the booths.

Assam is voting in three phases for the 126-member assembly.