'Internet sensation in yellow saree' on polling duty is from Lucknow

The lady in yellow saree, who became an internet sensation, as a polling officer who turned heads is Reena Dwiwedi and hails from Lucknow. Here's the story of the lady who is being hailed by social media as "yellow saree sensation."

When she walked in for polling duties in Lucknow carrying an EVM, earlier this month, her svelte figure and canary yellow sari made heads turn. One of her colleagues clicked her photograph and posted it on social media. Within no time, her photograph went viral and people began making inquiries.

The 'internet sensation in yellow', as she was called, is Reena Dwiwedi, a Lucknow resident.

Hailing from Deoria district, Reena has worked as an assistant officer in the PWD department since 2013. 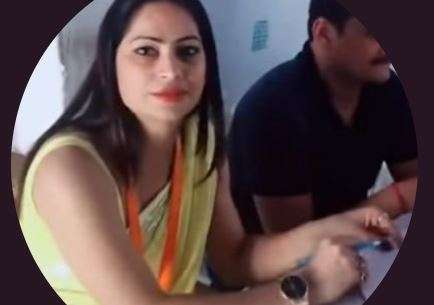 "I have done election duties in 2014 and 2017 too but this time, I seem to have suddenly become famous because of this photograph. People in my own office and even visitors are requesting me for selfies. Though it is nice to be famous overnight, it also gets uncomfortable at times," she says.

According to Reena, the best reaction came from her son Aadit, a student of Class 9.

"He came to me and requested to make a video call to his friends to make them believe that the woman is yellow sari was actually his mother," says Reena.

She says she is a fitness freak and is conscious of her diet. Before joining PWD, Reena had worked in the insurance sector.

"Private companies have a more disciplined work culture. I brought that legacy with me in PWD as well. Probably that is the reason my seniors and bosses appreciate me," she says.

Reena says she had received several offers to act in Bhojpuri films but did not take them up since her son was young.

"Maybe, if I get good offers now I may take them up because my son is old enough to take care of himself," she says.

(Except the headline, the copy has not been edited by IndiaTvNews.com)