Campaigning for Phase 2 of Lok Sabha elections ends today: 97 constituencies in 13 states to poll on April 18

The political blitzkrieg will die down today in 97 constituencies across 12 states and one Union Territory as the Election Commission prepares to hold voting there on April 18 in phase 2 of Lok Sabha Elections 2019.

Constituencies going to polls in Phase 2:

As all the seats in Tamil Nadu are identified as expenditure sensitive, special efforts are being taken by the Election Commission to check money power.

Western Uttar Pradesh will be a test case in the second phase of the general elections. There are serious farmers issues at stake there, yet they could be subsumed by the discourse on nationalism.

Across the country, there are other constituencies where farm distress will be a factor, like the Marathwada region, or backward Raiganj in West Bengal, where the agrarian crisis is a reality.

The question in Srinagar will be about keeping the separatists at bay. In the 2017 bye-elections, which former Jammu and Kashmir Chief Minister Farooq Abdullah won, the voting percentage was an abysmal 7.2 per cent, the lowest ever recorded till then for a Lok Sabha election.

Sitting MP: Ashok Shankarrao Chavan, Congress
Key candidates: Ashok Chavan (Congress), Chikhalikar Pratap Govindrao (BJP), Abdul Samad (Samajwadi Party)
Number of voters: 16.87 lakh
Main issues: This is an economically backward portion in the Marathwada region, where farm distress and water scarcity are main issues. Even though this is not a reserved constituency, the Scheduled Castes population has a significant vote base.

Sitting MP: Bhola Singh, BJP
Key candidates: Bhola Singh (BJP) and Yogesh Verma (BSP), who will be the candidate for the SP-BSP-RLD mahagathbandhan in Uttar Pradesh, and Bansi Lal Pahadia (Congress)
Number of voters: over 17 lakh
Main issues: This is a reserved constituency for the Scheduled Castes. Farm-related issues have a major role here. However, Bulandshahr is also a communally sensitive area and a campaign that focuses on this could find takers among the voters.

Sitting MP: Hema Malini, BJP
Key candidates: Hema Malini (BJP), Narendra Singh (RLD) who is a candidate for the SP-BSP-RLD mahagathbandhan in Uttar Pradesh and Mahesh Pathak (Congress)
Number of voters: 17.99 lakh
Main issues: The strong nationalistic narrative associated with the government of Prime Minister Narendra Modi finds resonance in this constituency. It got a fillip following the Balakot air strike. However, that does not overshadow issues related to farmers -- the problems of the sugar mills are well known -- unemployment, cleaning the Yamuna and infrastructure development. 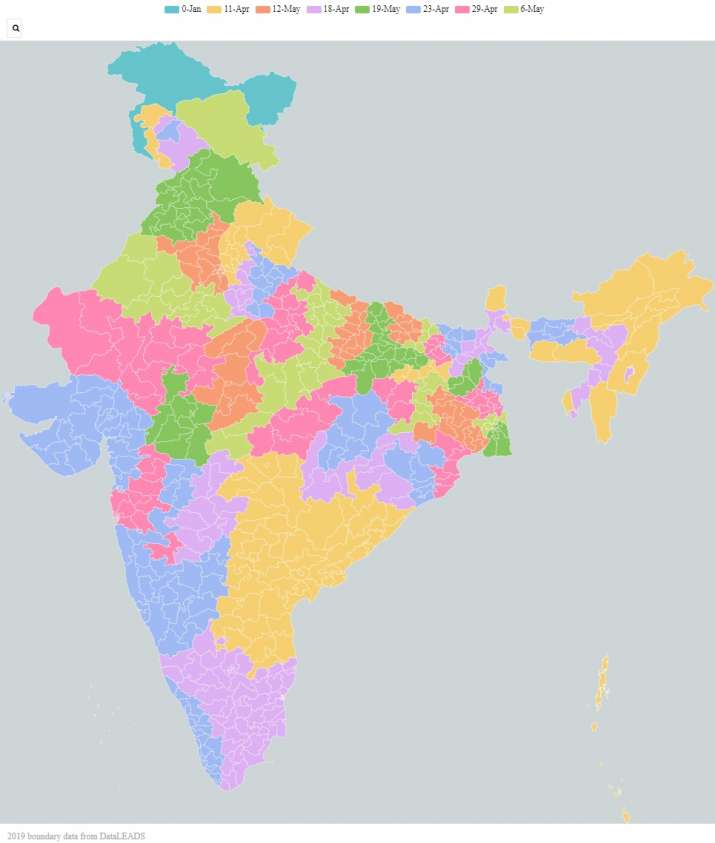 Sitting MP: Satish Gautam, BJP
Key candidates: Satish Gautam (BJP) and Ajit Balyan (BSP), who is the candidate for the SP-BSP-RLD mahagathbandhan in Uttar Pradesh and Brijender Singh (Congress)
Number of voters: 17.9 lakh
Main issues: Prime Minister Narendra Modi is a factor in the election but so are caste and development issues. Balyan is a Jat and his was a thoughtful candidate selection since the constituency has a significant Jat population. However, development issues have typically held sway in this university town. For the record, Gautam had created a stir last year over the presence of a portrait of Mohammed Ali Jinnah in Aligarh Muslim University. Over 20 per cent of the population is Muslim but Aligarh has never had a Muslim Lok Sabha MP. The Lodhs, an OBC community, is influential in the constituency and former Chief Minister Kalyan Singh's village of Atrauli falls within the Aligarh constituency. Singh is a Lodh.

Sitting MP: C. Mahendran, AIADMK
Key candidates: C. Mahendran (AIADMK), K. Shanmugasundaram (DMK) and A. Ganesha Moorthy (BSP)
Number of voters: Over 15 lakh
Main issues: The Pollachi sex scandal, which exploded in February, and the political fallout from it, would rank as the key factor in the elections. The scandal had first hit the ruling AIADMK but then scarred the DMK as well. Contrary to what many analysts had suggested, the Pollachi sex scandal will be a major election issue.

Sitting MP: H.D. Deve Gowda, JD-S
Key candidates: Prajwal Revanna (JD-S) and A. Manju (BJP)
Number of voters: 15.8 lakh
Main issues: BJP candidate A. Manju joined the BJP from the Congress party recently which makes the contest interesting. The constituency is dominated by Vokkaligas, who will be looking for support from other communities. Hassan is located along the Cauvery basin and is rich in cash crops. Naturally, the politics of the region is also determined by water availability.

Sitting MP: Farooq Abdullah, National Conference
Key candidates: Farooq Abdullah (National Conference), Sheikh Khalid Jehangir (BJP) and Agha Syed Mohsin (PDP)
Number of voters: Over 12 lakh
Main issues: The issue on test here will be democracy and India. A bypoll in 2017 -- following the resignation of Tariq Ahmad Karra -- had registered a mere 7.2 per cent voter turnout to elect Farooq Abdullah, the lowest ever for an election. At least seven people had died in poll-related violence.

Sitting MP: J. Jayavardhan, AIADMK
Key candidates: J. Jayavardhan (AIADMK), R. Kumar (BSP) and Sumathy (Alias) Thamizhachi Thangapandian (DMK)
Number of voters: 17.96 lakh
Main issuse: Apart from development, this election will also be about legacy -- of AIADMK's Jayalalitha and DMK's M. Karunanidhi. Issues of corruption and governance will be among the issues that voters are likely to consider in a muddled political scenario that is witnessing efforts by the BJP to gain a toehold in the state.

Sitting MP: Santosh Kumar Kushwaha, JD-U
Key candidates: Santosh Kumar Kushwaha (JD-U) and Uday Singh alias Pappu Singh (Congress), who is the candidate for the Congress-RJD combine in Bihar
Number of voters: 15.82 lakh
Main issues: Issues of development like roads, public transport, water and sanitation could be overshadowed by caste and nationalism issues. At one point the contest could see a clash between the Hindutva politics of the BJP and the Muslim-Yadav vote bank of the Congress-RJD candidate, who is a Rajput.

Sitting MP: Sushmita Dev, Congress
Key candidates: Sushmita Dev (Congress) and Rajdeep Roy (BJP)
Number of voters: 10.60 lakh
Main issues: Despite the large number of Muslims in this constituency, it had generally stayed away from polarisation. That has now changed. The NRC was one factor in this. The rise of the BJP in the state is another. However, this narrative has also served to mute some of the anger on development issues that could have been used by the BJP to put Dev on the defensive. Her father, Santosh Mohan Dev had represented the constituency but was said to not have been successful in bringing development to the area.