Krishna Mohan Medical College and Hospital, Mathura has announced a 7 percent fee hike in the current fee structure amid coronavirus pandemic, students have said. The students and their parents told indiatvnews.com that the college is demanding the updated fees by July 30, otherwise, they will have to pay the penalty fee.

Krishna Mohan Medical College and Hospital, Mathura has announced a 7 percent fee hike in the current fee structure amid coronavirus pandemic, students have said. The students and their parents told indiatvnews.com that the college is demanding the updated fees by July 30, otherwise, they will have to pay the penalty fee.

According to the students, the medical college which is affiliated to Dr. Bhimrao Ambedkar University, Agra announced the fee hike on July 14. Students were informed of the new fee structure on the college Whatsapp group. 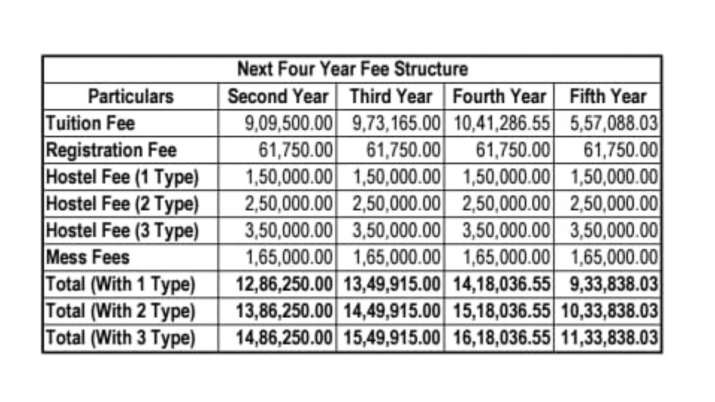 "We have two official Whatsapp group--one, that comprises of students and College Administration and another group that has parents and college staff. On July 20, one of the admission in-charge informed on the groups about the fee hike and changed the settings to 'only admin can message'. We tried to talk to them to cancel this fee hike and they continuously said that we will have to pay," a first-year student said on condition of anonymity.

The students told indiatvnews.com that the medical college charges, Rs.8.5 lakhs as tuition fee, Rs.1 lakhs as enrollment fee (only in first-year), Rs.1.5 lakhs for hostels with fan, Rs.2.5 lakhs for a hostel with cooler, Rs.3.5 lakhs for hostels with AC, Rs.1.65 lakh as mess fee (lunch on Sundays not provided), Rs.3 lakh as security fee (one-time during admission) and Rs.61,750 as registration fee every year.

"During my admission last year, the college informed us that we have a fee-hike case in court, and if we win then you will have to pay the new fees. The UP govt has asked all colleges to fix hostel fees at Rs.1.5 lakhs," a student said.

"How are we going to pay so much money in the current times? We have been sending emails to the college officials and they are not listening. They are saying you will have to pay no matter what by July 30," another first-year student told indiatvnews.com.

The students also informed that the college officials told them that if anyone wants to discuss anything about fees then only parents are allowed to come to the campus.

Several worried parents also raised their concerns over mail and the college authorities instead of listening to them asked for their students' names.

According to the mail sent by the parents to the college administration, the matter of fee hike is pending in High Court and no judgment has been announced so far.

"Most of us are struggling financially due to the pandemic. We want that the college should not implement this fee-hike and there should be at least 50 percent concession on hostel feels and complete relaxation on mess charges as the students are at homes since March. We can't pay this much fees right now," a parent of a first-year student said.

The students and their parents also demanded that due to the COVID-19 situation, an online conference between college Management/Authority and parents should be done for any clarifications instead of calling the parents to visit the college premises in person.

Indiatvnews.com tried to contact the college administration but the officials refrained from making any comment on this matter.