New Delhi: Railway Minister Suresh Prabhu today presented the Rail Budget for 2016-17 in the Lok Sabha. Presenting his second Rail Budget, he said that core objective is to become an engine of employment generation

New Delhi: Railway Minister Suresh Prabhu today presented the Rail Budget for 2016-17 in the Lok Sabha. Presenting his second Rail Budget, he said that core objective is to become an engine of employment generation and economic growth at national level.

He said Railway will generate 9 crore man-days employment by 2017-18 and 14 crore man-days by 2018-19. Minister announced New freight corridors Delhi-Chennai, Kharagpur-Mumbai and Kharagpur-Vijayawada. He said that he is happy to announce that action has been initiated on 139 Budget announcements last year.

The minister announced setting up a Rail university at Vadodara. He announced to take up on priority the provision of passenger amenities and beautification on stations at pilgrimage centres including Ajmer, Dwarka, Gaya, Puri, Varanasi and Parasnath. In addition to this, Prabhu said to spread awareness about our national animal, the tiger, complete packages would be provided by railways to wild life circuits.

* Railway Board to be re-organised 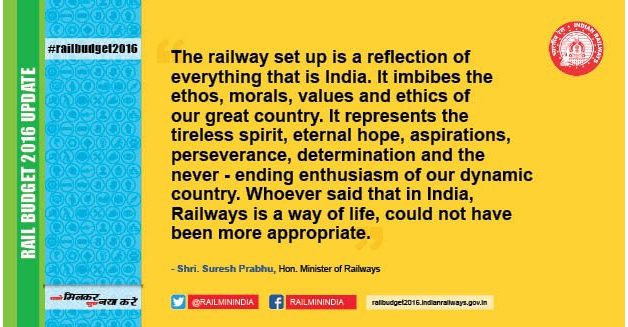 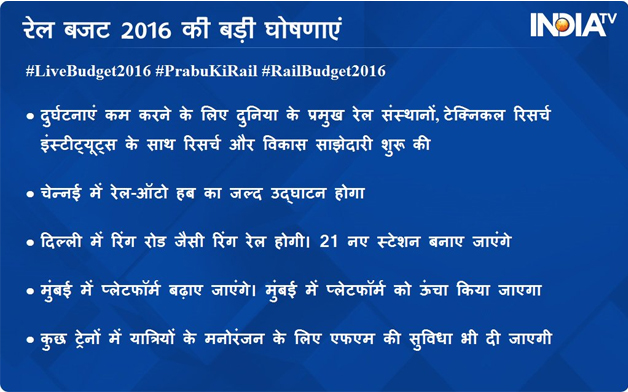 * Project progress to be done through drones

* Exploring the possibility to monetise data 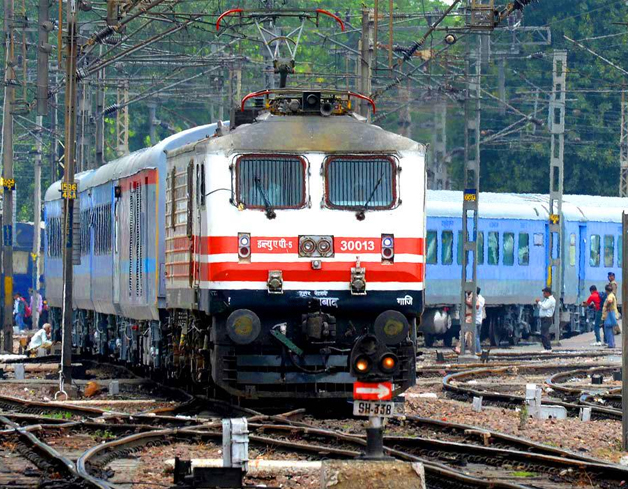 * Round the clock helpline for women to be introduced

* Freight basket of commodities to be expanded

* India's first Rail auto hub to be introduced in Chennai

* Will appoint key customer manger to deal with grievances

* We intend to take up on priority provision of passenger amenities,beautification of stations at pilgrimage centres including including Ajmer, Amritsar, Bihar, Chengannur, Dwarka, Gaya, Haridwar, Mathura, Tirupati, Varanasi: Suresh Prabhu

* Kolkata Metro phase-I to be ready by 2018. Two elevated suburban corridors in Mumbai

* We intend to take up on priority provision of passenger amenities, beautification of stations at pilgrimage centres: Prabhu

* Baby food, hot water and hot milk to be made available at stations

* Coolies to now be called 'sahayaks'

* Travel insurance options for passengers at the time of booking

* E-booking on concession passes for journalists to be introduced, says Suresh Prabhu 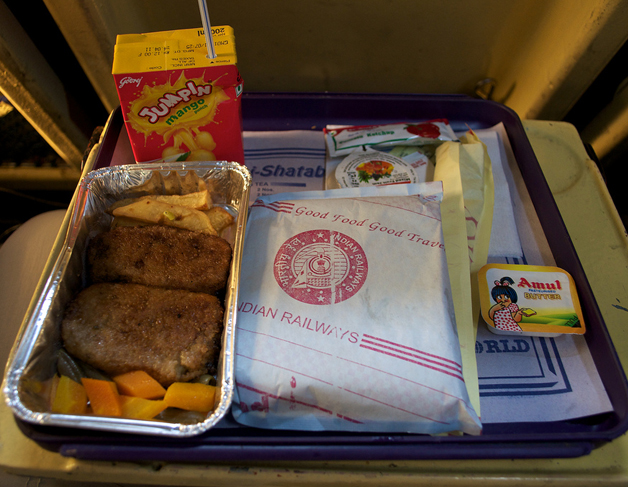 * 'Clean My Coach' service through SMS for passengers

* Will introduce cancellation facility for passengers through 139

* Sub quota of 33 % for women across all reserved categories

* Humsafar - full AC-III, Tejas - 130 km per hour with onboard services through one service provider and

* Redevelopment of 400 stations through PPP

* Free wifi at 100 stations this year, expect 400 stations by next year

* We have a traget of commissioning 2,500 km of broad gauge this year: Manipur, Mizoram to be on broad gauge map 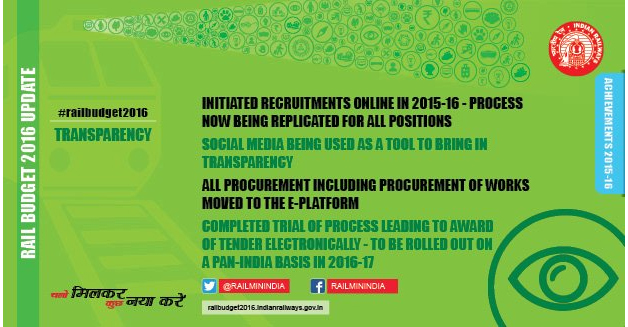 * Joint venture with states for new projects. Electrification budget increased by 50 per cent

* Make In India: 2 factories to add to global supply chain

* Happy to announce that action has been initiated on 139 budget announcements made last year: Prabhu 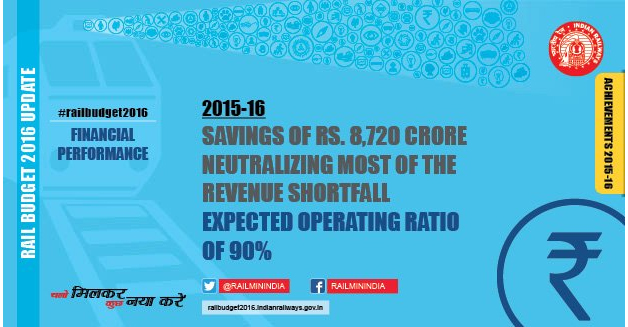 * Bankable Railway projects are now assured of funding and should be completed within the next 3-4 years: Prabhu

* Our PM Narendra Modi ji had once said ‘my vision is to make Railways the backbone of India's progress and economic development'. We are making all effort to translate his vision into reality: Prabhu

* Expect Operating Ration of 92 per cent for FY17, 90 per cent after factoring in 7th pay commission: Prabhu 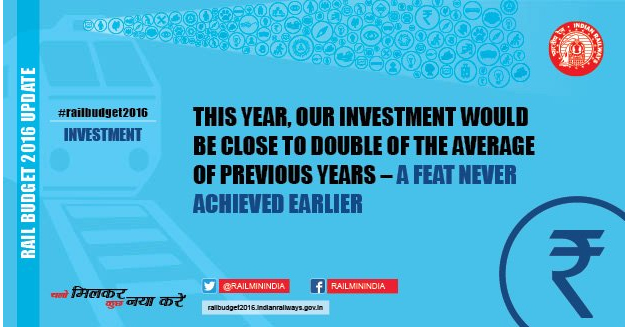 * A saving of 8,720 crore rupees for budget estimates of last year will be effected this year: Prabhu

* We are faced with challenging times. We need to reorganize & rejuvenate Indian Railways. We will exploit new sources of revenue: Prabhu

* It has been prepared in the interest of the nation and the railways, taking into consideration the ground reality before finalising it: Prabhu

* I hope that we will be successful in fulfilling their expectations: Prabhu

* The entire country has great expectations and hopes from the railways. Beside, the people have their own concerns and problems as well. Hence, we have prepared the budget taking into account their hopes and aspirations from the railways: Prabhu

* Railway Minister Suresh Prabhu leaves his residence for the Parliament. 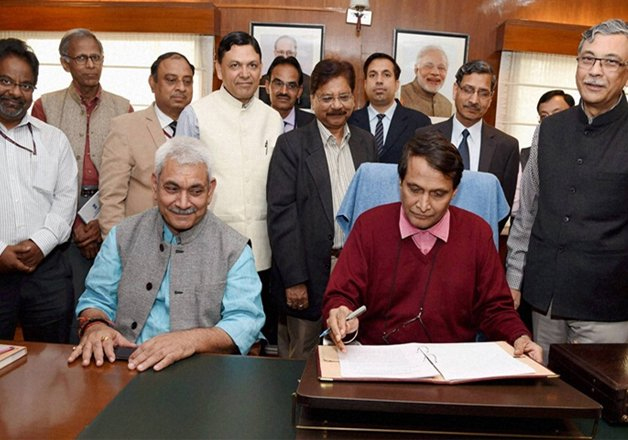 Suresh Prabhu is the 43rd Railway Minister of India to present the Rail Budget since September 2, 1946. Former Congress leader Jagjivan Ram has the record for presenting the most number of Railway Budgets (six times between 1956 and 1962). Three Railway Ministers - Lal Bahadur Shastri, CK Jaffer Sharief and Lalu Prasad Yadav - have presented the Railway Budget five times each, while three others - N.Gopalaswami Ayyangar, SK Patil and Nitish Kumar - have presented the Railway Budget on four occasions each.