Motorola Razr 2019 is a foldable smartphone with dual displays, Snapdragon 710 processor and more.

Foldable smartphones might not be perfect but they are definitely the talk of the town and we sure get all mesmerised by them. For the same mesmerisation (with a dollop of nostalgia), Motorola hopped onto the foldable bandwagon and launched for us the Motorola Razr 2019. The foldable device is an amalgamation of the flip phone days then and the foldable days now, giving out the nostalgia feels just right.

The Motorola Razr 2019 has officially reached the Indian shores (after delays though) and prior to it, I got an opportunity to visit the Motorola office and spend some time with the Motorola foldable smartphone. Hence, here are my Motorola Razr first impressions and what I felt when I used the device. Read on to know all about it.

As known to all, the Motorola Razr boasts a clamshell design and folds/unfolds in a horizontal fashion. On the first look of it, it totally appears as the reborn version of the original Motorola Razr series introduced way back in 2004. But, when you start using it, you know it is a child born out of the flip phone era and the foldable one. The foldable smartphone has been marketed as the iconic product from the company owing to how Motorola has brought the now-dead device to life with a twist (in this case, a fold!) The Motorola Razr isn’t bulky and has a decent built quality. However, it lacks the premium touch to it. But it has nostalgia feels and that suffices. 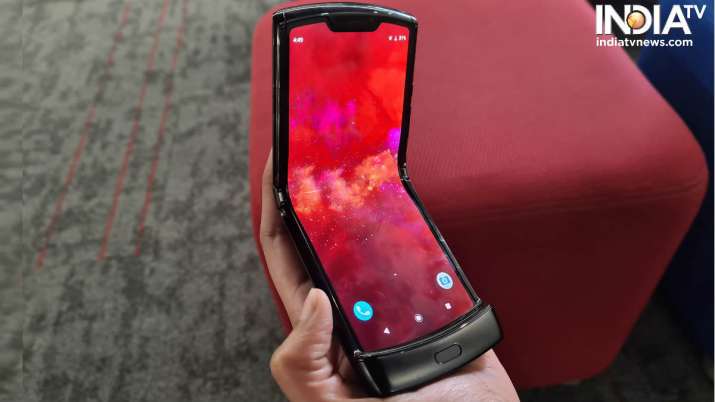 When I held the device, its fragility didn’t allow me to fold it with a bam. But, some time with it and I was assured nothing will happen to it. That’s when my folding/unfolding process began and it took me back to the time when I actually used a Motorola flip phone. One thing I have realised about a foldable smartphone device; it will take some time to get a hang of it and once you do, it will be fun and using one will appear intriguing since it ain’t the conventional phone. 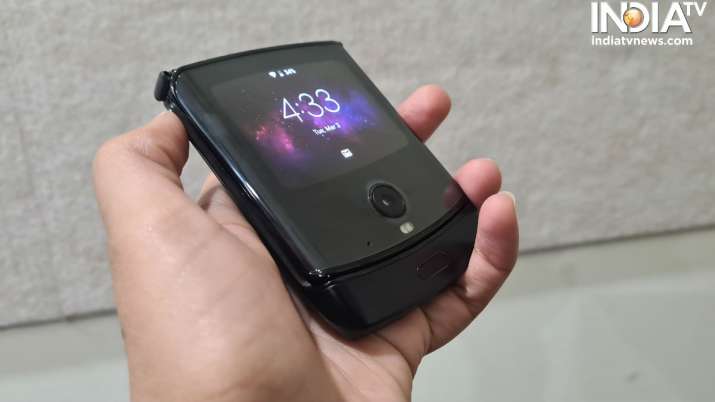 When the device is unfolded, it is like a general phone and gives rise to a 6.2-inch display made up of plastic. Once folded, you get a secondary display for notifications and even taking selfies. The device is a comfortable one; you won’t know you are using a foldable one after like five minutes (the craze will settle in). It folds like a makeup mirror and putting it in a pocket will tell you how convenient the clamshell design is. The short period of time I used the device for didn’t generate problems with the display. Viewing content on it and scrolling through it was as easy as on any other device. But, there are some points that creep in and you might not be happy. 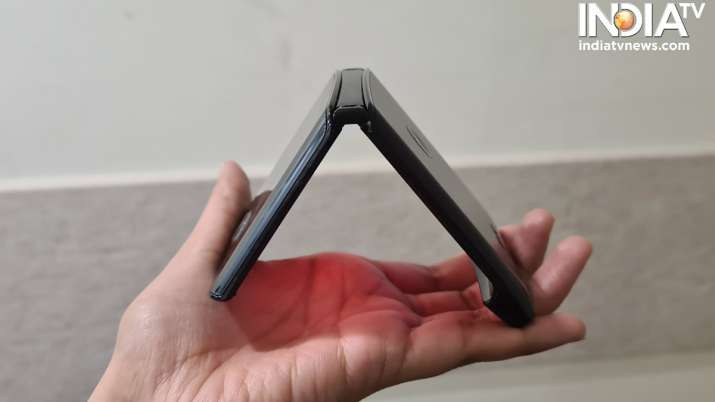 The device has a zero-gap hinge and uses a closing procedure we often use on a sheet of paper. It elevates, slides towards the chin of the device and then folds -- a scenario to avoid creases. While the display is totally creaseless after all the possible folds I could perform, the creaking sound each time you do so is bothersome. It’s symbolic of the not-so-easy fold, which is otherwise claimed to be smooth. Then, the display pops like a 3D covering on the device and scared me each time I wanted to fold it. These were the two concerns that arose and my full review will tell whether or not they are a problem. 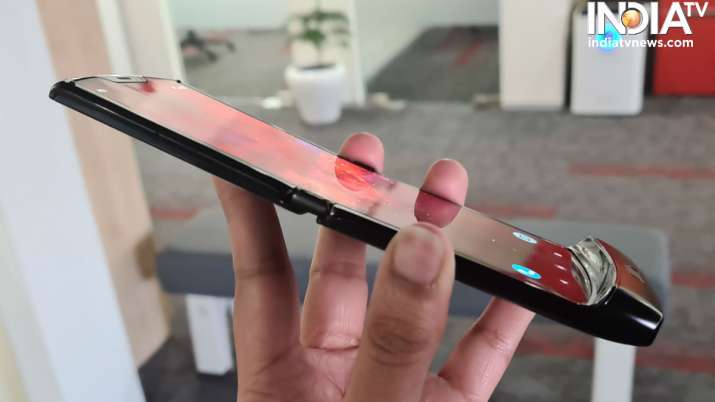 I tend to not mention the smartphone boxes since most of them have the usual content. But, the Motorola Razr has the fancy box that you should get with a smartphone costing over a lakh and put me in awe of it. There is this prism-shaped box that houses another small prism-shaped box for the braided earphones, USB Type-C cable, adaptor, and more. Then there are the usual manuals, SIM ejection PIN, and more. The box also equips an amplifier for better audio output when the device is put in the box. This, my friend, is an impressive move. 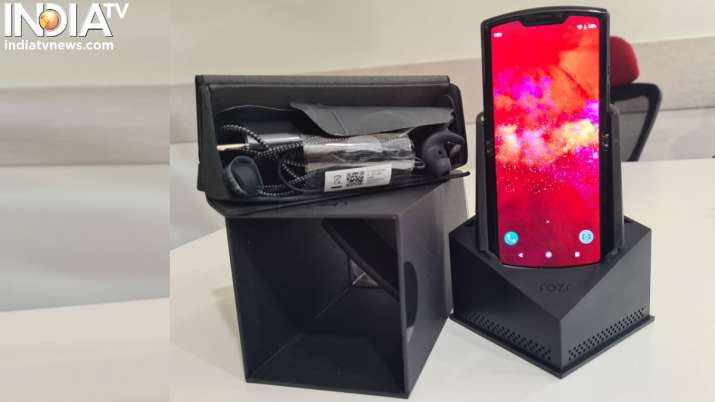 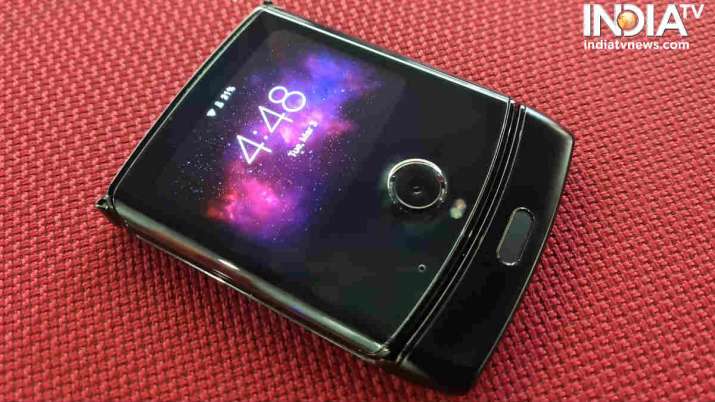 Here are the Motorola Razr 2019 specifications: 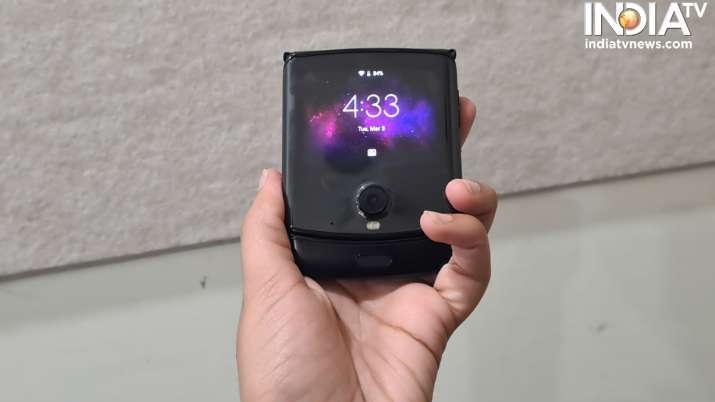 The Motorola Razr has two cameras; one on the surface rated at 16MP and the other one on the inside configured at 5MP. The 5MP one acts as a selfie snapper while the 16MP camera as a rear one. The device supports Portrait mode, Night Vision, and AI camera features. While I couldn’t use the cameras fully, they appear quite decent and I am waiting to test them thoroughly. One interesting feature (a Moto Action) is that you need to twist your wrist to access the camera via the secondary display and this was the easiest gesture I used in a long time. It is quick, it works, and that’s what we want. 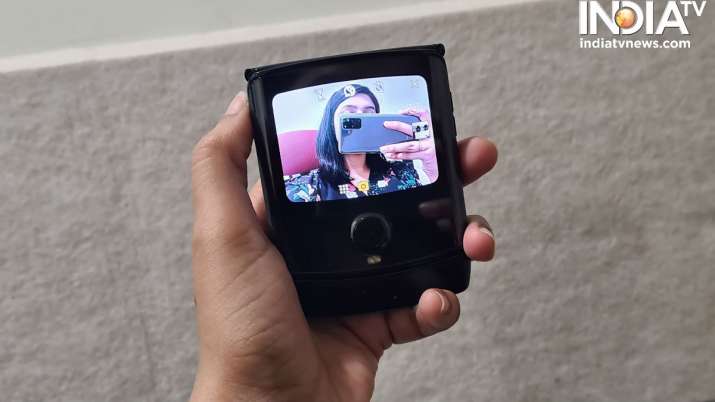 The UI is quite neat, given that its stock Android 9.0 Pie. However, the use of an outdated version of Android disappointed me. Motorola claims to get Android 10 on the Motorola Razr quite soon and I am looking forward to it. The front capacitive fingerprint scanner was snappy and it reminded me how I love capacitive ones. Among others, the audio is decent. 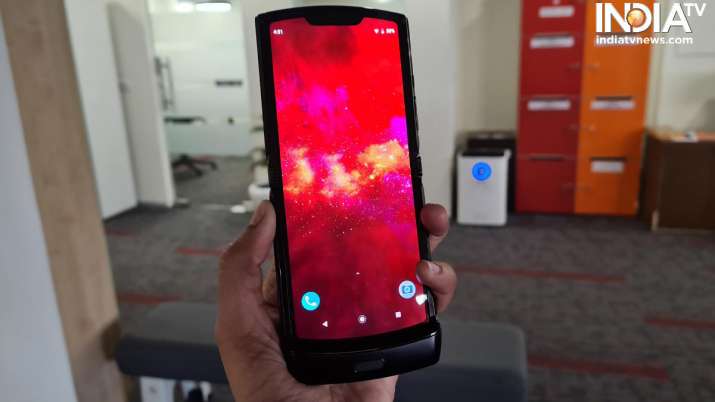 One thing that needs special attention is the Retro mode. Not the design, not the elevated chin but the retro mode takes you down the memory lane filled with nostalgia and accomplishes what Motorola intended to do -- remind you of the original Razr. The Retro mode is enabled from the notification window and the old T9 keypad format in the lower half and the display in the other surface. With the mode enabled, you can perform tasks such as calling, messaging, and a couple more. 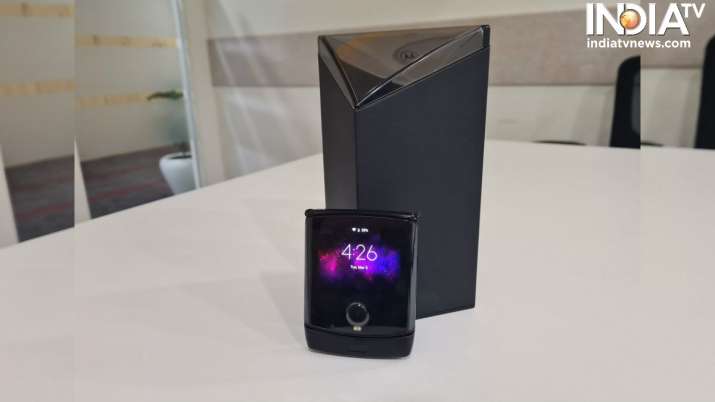 The Motorola Razr 2019 brings about mixed emotions. There flowed nostalgia, excitement, confusion, and a lot more when I used it for the very first time. While the Rs. 1,24,999 price and the mid-range specs are bound to cause disappointment, the very feel of the Motorola Razr is an escape from the smartphones we see every day and that’s why it stands a chance. I will be coming up with a detailed review soon to find out whether or not it’s worth the pennies we are expected to spend on it. Hence, stay tuned to this space.