While javelin star Neeraj Chopra is the brightest prospect for India's first medal in the track and field events, sprinter Hima Das's dash into the Olympics requires a reality check.

Clouds of uncertainty might be hovering over the already-delayed Tokyo Olympics, which is scheduled in less than five months from now, due to the COVID-19 pandemic but the Indian track and field contingent has intensified its preparations with the domestic season kicking off in Patiala recently and the qualifying cut off date of June 29 nearing.

The opening two events of the season in Indian Grand Prix I and II expectedly have turned out to be a low-key affair as records are seldom tumbled at the beginning of the season. Athletes' focus is mostly on building up on the technical changes they have made to their game during the pre-season with the aim to prime at the right time of the season, in this case ideally Olympics. However, with many athletes yet to breach the qualifying standards, some fireworks could be expected as early as the Federation Cup in March.

And with the advent of new athletics stars in Neeraj Chopra, Hima Das among others over the past few years meant hopes are high of them. But how close they are to India's first medal in the track and field (or the first in 121 years if you are considering the two silver medals won by Norman Pritchard for British India in 1900), let's take a look. 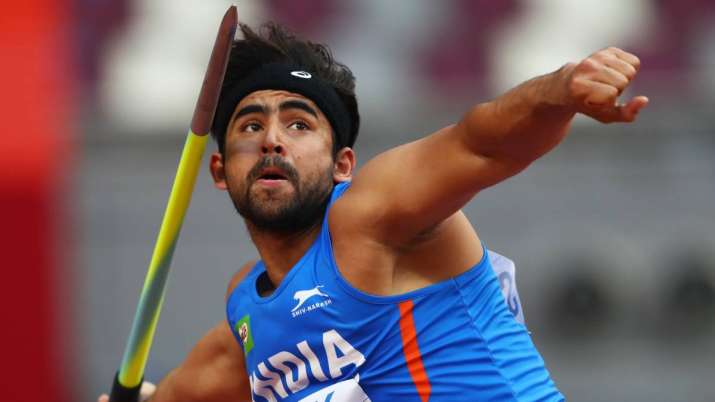 Neeraj Chopra's string of ever-improving performances has been a refreshing sight for Indian athletics fans. Since gaining attention with his world U-20 record throw of 86.48 metres at the 2016 World Under-20 Championships in Poland, the 23-year-old young man from Panipat has only got better with time as his personal best now stands at a palpable 88.06m; fetching him the gold medal at the 2018 Asian Games gold while re-writing the national record.

An elbow injury lay-off soon after suggested that his Olympic ambitions might be derailed but a big 87.86m throw at a pre-season competition upon return in South Africa days before the COVID-19 pandemic lockdown reignited all the hopes yet again.

Shivpal Singh too is not lagging far behind as he booked his Tokyo ticket weeks after at the same venue. The burly man from Varanasi produced a stunning throw of 85.47m and soon made tall promises of breaching the 90m mark.

And breaching that allusive mark is vital if Neeraj and Shivpal want to have a shot at winning the gold because a certain Johannes Vetter has set the bar way too high with a humongous 97.76m last year while going above the 90m-mark consistently.

However, Vetter is not the only problem the Indian duo has as the likes of Magnus Kirt, Andreas Hofmann, Thomas Rohler among others are also in the run to the gold and have better personal bests to their names.

And make no mistake, this is probably the best Indian athletics has to offer as far as medals are concerned as the rest of the pack is going to have personal goals of their own.

Among women's javelin throwers, Annu Rani is the sole quality performer from the country, who impressed with her personal best of 62.43m at the World Athletics Championships back in 2019; helping her reach the final. While further improvement is expected of her, a lot will depend on the international quality event she gets to participate in leading the Olympics in a COVID-19 hit season - something she admitted in the past herself.

To Annu's credit, she is currently well-placed in the World Athletics ranking at 12 (an alternate to qualify for the Olympics if an athlete failed to breach the qualifying mark; this only comes in effect if all the slots for the Games are not filled).

Given her recent form, the qualifying mark of 64.00m seems attainable but expecting her to be a medal contender, would be too much of an ask and reaching the Olympics final should be considered a fair result. 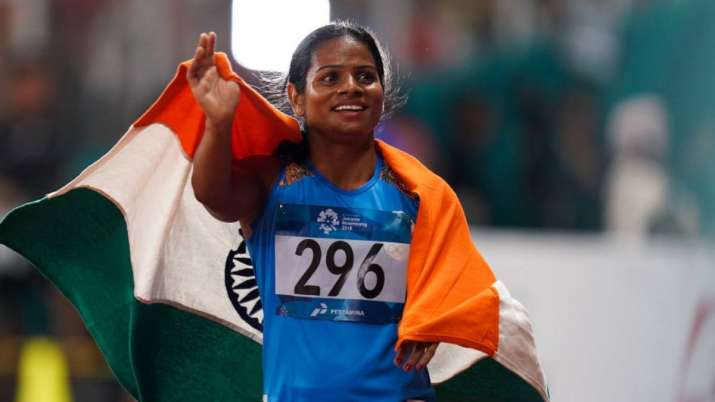 Yes, you read that correctly. Hima Das and Dutee Chand, despite the hype created around these two sprinters, are no medal contenders at the Olympics. In fact, they are far from it.

Hima, who had struggled with mysterious injuries post-2018 Asiad glory, is not the Dhing Express we were once familiar with. Her exciting national record timing of 50.79m in her forte 400m event is a thing of the past now as her battle with unknown injuries has halted her progress that once seemed promising.

The Athletics Federation of India then recently decided to shift her focus to the 100m and 200m sprints with months to go for the Olympics while hoping that pairing her with Dutee Chand in the 4X100m will form a dream team. But given the tough competition in the category and stiff qualifying mark, the star sprinters have their work cut out.

Dutee (personal-best 11.22 seconds in 100m) still needs to shave off further 0.07 seconds in order to achieve the Olympic cut of 11.15 secs while Hima is yet to run 100m this season and has started off with 200m, in which her personal best has been 23.10 seconds. And there's no respite for the 23-year-old Assam girl as well as Hima is required to clock a stiff 22.80 seconds for Tokyo cut.

Things are looking bleak with the 4X100m relay too. To give you a context, India's national record timing of 43.42 seconds (set in 2016 by Dutee & Co.) is two seconds slower than current world leaders Jamaica (41.44 seconds).

In case you are wondering if World Athletics ranking can come to their aide, Dutee is currently placed 33rd in 100m ranking (taking into account her top five performances as per rating of the competitions during the qualifying period — January 1, 2019 to April 5, 2020 and from December 1, 2020 to June 29, 2021) while Hima Das is not inside the top 100 in 200m at the moment.

Quarter-milers need to cope up without Hima 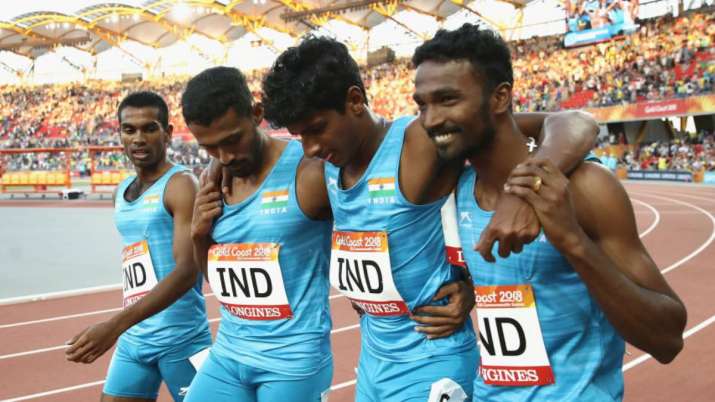 With Hima expectedly not running the 400m anymore, India's 4X400m mixed relay team will be left significantly weakened without the country's fastest women quarter-miler after they booked their Tokyo spot at the 2019 Doha World Championships. The onus will be on national record holder Muhammad Anas Yahiya and chums such as Nirmal Noah Tom, VK Vismaya among others to replicate the Doha performance of reaching the final and finishing seventh in a highly-competitive field.

The Indian men's and women's relay team are also within the cusp of qualification through world ranking which permits the top 16 to qualify.

400m hurdlers Dharun Ayyasamy and MP Jabir, who have also been part of the 400m flat out relay team in the past, will also resume their hunt for the 48.90 secs. While Jabir (personal best 49.93s) has a point to prove that he is the top hurdler in the country, for Dharun (personal best 48.80s) the season will be all about getting back to his best again after his struggles with a recurring shin injury. However, a medal is still out of their reach with the expected in place, especially after Karsten Warholm clocked a stupendous 46.87 seconds and will be gunning for the 19-year-old world record of 46.78s. 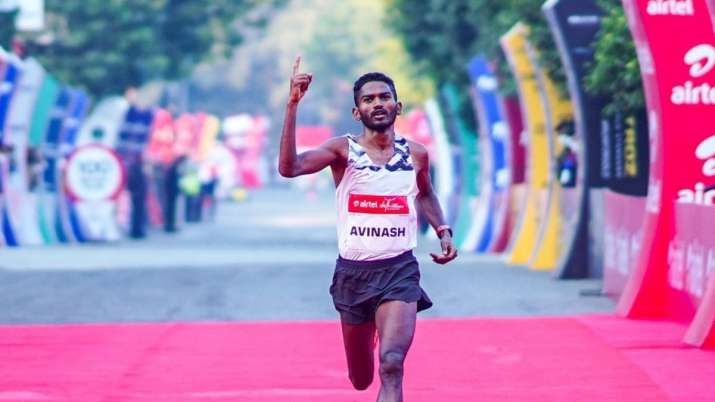 Leading to the Olympics a couple of years ago, the focus was firmly on the progress of familiar faces such as 1500m runner Jinson Johnson, 3000m steeplechase star Sudha Singh. However, off late a string of strong performances from steeplechaser Avinash Sable and boom of racewalkers such as Bhawana Jat and Priyanka Goswami have forced the AFI to take note of their progress as they booked their Tokyo ticket before the big shots.

Sable, who is currently training under coach Amrish Kumar, has stressed the importance of training abroad ahead of the Olympics but given the current pandemic situation, competing and training abroad has been a luxury. It's also important to note that the 26-year-old runner hasn't competed in his forte event since November 2019 and lack of competitive time could ultimately hurt his Olympics ambitions.

Among the field events, shot putter Tajinder Pal Singh Toor will be having a battle of his own in his bid to breach the unprecedented mark of 21.10m for Tokyo. The pandemic was a bit of a blessing in disguise for him as the time off allowed him to recuperate from his recurring wrist injury.

Sreeshankar: One for the future 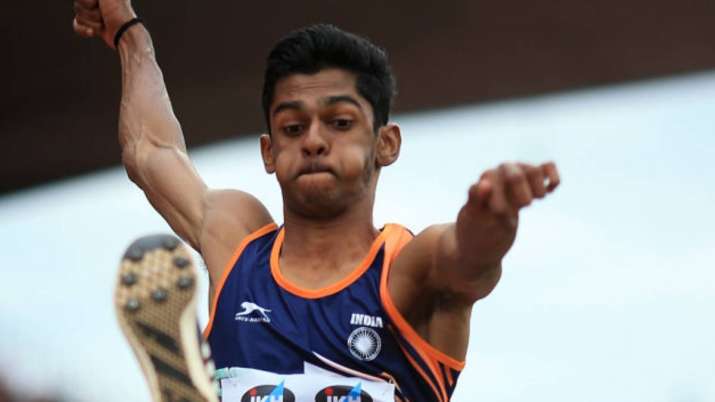 Apart from the senior athletes, eyes will also be on the progress of long jumper M Sreeshankar, who is aiming to breach the 8.22m qualifying mark. The 21-year-old national record holder (8.20m) is already off to a strong start to the season with an 8.05m jump at the IGP II and could soon be closer to the milestone. He is also decently placed in the world rankings at 28. However, expecting him to vie for a medal with little experience to his name would be too much to ask for. Instead, Tokyo could be another learning curve for him with the aim of further progress for the Paris Olympics.