Virat Kohli in 10k club: A look at his top 10 ODI innings

Virat Kohli smashed 157* runs against West Indies in the second ODI and became the fastest man to reach the milestone of 10,000 runs in ODIs breaking the record of his idol Sachin Tendulkar.

'King' Kohli comfortably bettered the record set by the man who was to Indian cricket for over two decades what the 29-year-old has been for the past few years.

Exclusive | Virat Kohli is a diamond, anything is possible for him: Sourav Ganguly to IndiaTV

Tendulkar took 259 innings to get there, while Kohli has so far batted in 205 innings. Fortune, too, was on Kohli's side as West Indies skipper Jason Holder dropped his Indian counterpart on 44.

Seventeen summers ago, Tendulkar had ventured into what was then an unchartered territory, during a match against Australia. On Wednesday, Kohli became the 13th batsman to reach the milestone.

As Kohli reached the 10000 runs, here is the list of his best knock in ODI cricket:

Kohli has made many big scores than 133 but this innings vs Sri Lanka was special as it was a do or die match for India to qualify for the finals of the triangular series against Sri Lanka and Australia. Lanka team posted the target of 320 runs and India had to reach it within 40 Overs to better the Net Run Rate. The master of chase Kohli step for the Indian team after the wicket of Sachin Tendulkar and smashed Lanka strike bowler Lasith Malinga all over the park to win the match in just 37th over.

The King of Chasing big total Virat Kohli was on fire against the Arch rivals Pakistan in a do or die match to stayed alive in the tournament. Kohli smashed his highest ODI score of 183 runs against the Green army in just 148 balls. At one point in the game, Men in blue needed 169 off the last 25 overs but thanks to King Kohli they reached the target of 330 runs in 47.5 Overs.

Not many people are aware of it that ​Virat Kohli holds the record of fastest ODI century for by Indian player. King Kohli chose the toughest opposition in world cricket Australia to achieve the feat and smashed the century in just 52 balls. Aussie team posted 359 runs on the scoreboard at Sawai Maan Singh Stadium in Jaipur and it was a bad day for Kangaroo bowlers as Indian top 3 Rohit Sharma, Shikhar Dhawan and Kohli thrashed them which led India to win the match by 8 wickets in 43.3 overs.

In 2009, Kohli started his habit of scoring ODI centuries when he scored 107 against Sri Lanka while chasing 316 runs.  Kohli and veteran Gautam Gambhir 150* added 224 for the third wicket in just 35.4 overs after the departure of iconic opening duo Sachin and Virender Sehwag on the score of 23. Gambhir was so impressed with Kohli batting that he gave his Man of Match award to the young Kohli.

It was Kohli’s most dominant show against South Africa at their ground. Indian skipper smashed 160* runs and India posted 303 runs against the Proteas. Kohli captaincy innings led India to win the match by 124 runs. Kohli hit 12 fours and 2 sixes in his athletic innings. 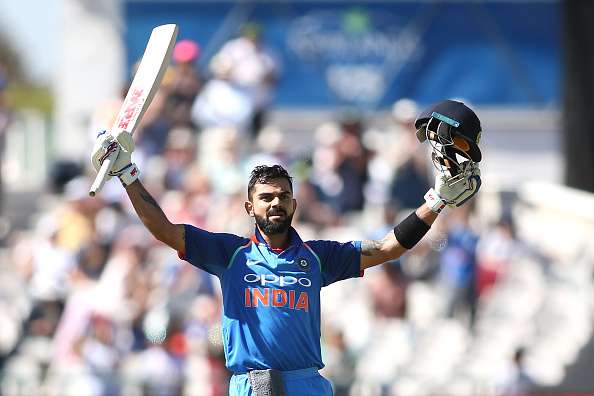 Indian captain hit his second successive century against West Indies taking his overall tally to a whopping 37 tons against West Indies in the 2nd ODI of the 5-match series in Visakhapatnam. In the process, he also became the fastest man to reach the milestone of 10,000 runs in ODIs breaking the record of his idol and Indian legend Sachin Tendulkar. Kohli smashed 157* runs in just 129 balls.

Skipper Kohli scored his 36th One Day International century off 88 balls to put India in a commanding position against West Indies. It was the inning full of sheer class, Kohli smashed the Windies bowlers all over the park and hit 21 fours and two sixes in his dominating innings.

Run Machine Kohli masterclass against New Zealand made headlines as it displayed the determination of the 29-year old to step up for his time in the crucial stage after the early departure of openers Rohit and Dhawan. Kiwi players also appreciated Kohli calm and composed innings after the match. 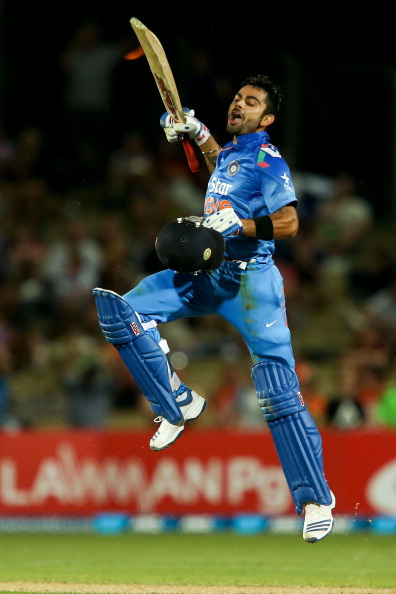 In 2015 ICC World Cup the stage was set for Kohli to thrash arch-rivals Pakistan to maintain India’s winning streak against them in the biggest cricket tournament. With the 107 King Kohli Virat Kohli became the first Indian to score century against Pakistan in World Cup history. 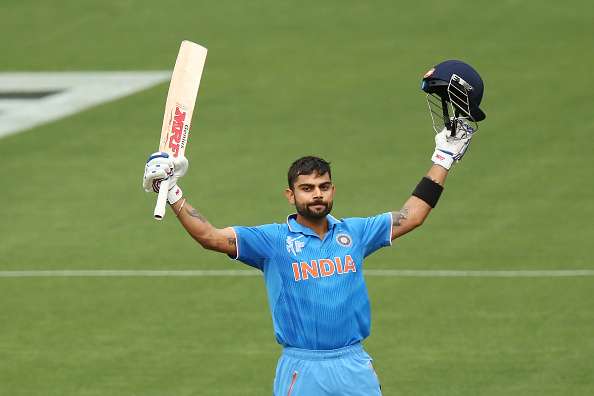 10. 115* vs Australia
After George Bailey masterclass of 156 in first innings, Kohli has some different plan for the Kangaroos. Chasing the humongous target of 351, then vice-captain stood tall in the way of Aussies victory. Kohli smashed 18 fours and a six to outclass Bailey’s Australia.