Microsoft CEO Satya Nadella is the recent one to join the debate against Citizenship Act. Nadella's statement on CAA has gathered much political reactions, including from Meenakshi Lekhi, who said "literate need to be educated." Satya Nadella's statement comes at a time when the CAA is already witnessing widespread protests from across the country.

Microsoft CEO Satya Nadella on Monday joined the bandwagon against the amended Citizenship Act, which is already witnessing massive protests from across different parts of the country. While speaking to BuzzFeed News Editor-in-Chief Ben Smith, Nadella poured his heart out and said "what is happening India is sad... and bad." Satya Nadella further said he would rather love to see a Bangladeshi immigrant making his name in India. The Microsoft CEO's comments, however, have not gone down well some political leaders.

Before I take you to the reactions Satya Nadella's comments garnered, read the below text to know exactly what the Microsoft CEO had said.

"To me, in fact I obviously grew up in India and I'm very proud of where I get my heritage, culturally in that place, and I grew up in a city, I always felt it was a great place to grow up, we celebrated [unintel], we celebrated Christmas, Diwali, all three festivals that are big for us, I think what is happening is sad, primarily as sort of someone who grew up here, I feel, and in fact quite frankly, now being informed shaped by the two amazing American things that I've observed which is both, it's technology reaching me where I was growing up and its immigration policy and even a story like mine being possible in a country like this.

I think it's just, bad if anything I would love to see a Bangladeshi immigrant who comes to India and creates the next unicorn in India, or becomes the CEO of Infosys, that should be the aspiration, if I had to sort of mirror what happened to me in the US, I hope that's what happens in India.

I'm not saying that any country doesn't and should not care about its own national security, borders do exist and they're real and people will think about it, I mean after all immigration is an issue in this country, it's an issue in Europe and it's an issue in India, but the approach that one takes to deal with what is immigration, who are immigrants and minority groups, that sensibility.

That's where I hope these liberal values that we've kind of come to -- It's capitalism, quite frankly, has only thrived because of market forces and liberal values, both acting and I hope India figures it out, the good news at least as I see it is it's a messy democracy and people are debating it, it's not something that is hidden, it's something that is being debated actively but I'm definitely clear on what we stand for and what I stand for."

Satya Nadella's statement had come in response on being asked about his views on the amended Citizenship Act and if he sees some risks in working with a government that uses data for reports of individuals in the country.

Reacting sharply to Nadella's statement, Bharatiya Janata Party MP Meenakshi Lekhi termed it a perfect example of how the literate ones need to be educated.

"How literate need to be educated ! Perfect example. Precise reason for CAA is to grant opportunities to persecuted minorities from Bangladesh, Pakistan & Afghanistan. How about granting these opportunities to Syrian Muslims instead of Yezidis in USA ?" Meenakshi Lekhi was quick to post on Twitter.

Lekhi's analogy of providing "opportunities" to Syrian Muslims instead of Yezidis in the US was intended to highlight the victims have been the religious minority facing persecution, who are being given priority through the CAA.

"I am glad Satya Nadella has said what he has. I wish that one of our own IT czars had the courage and wisdom to say this first. Or to say it even now," Ramachandra Guha tweeted, as he lauded Nadella for his stand. 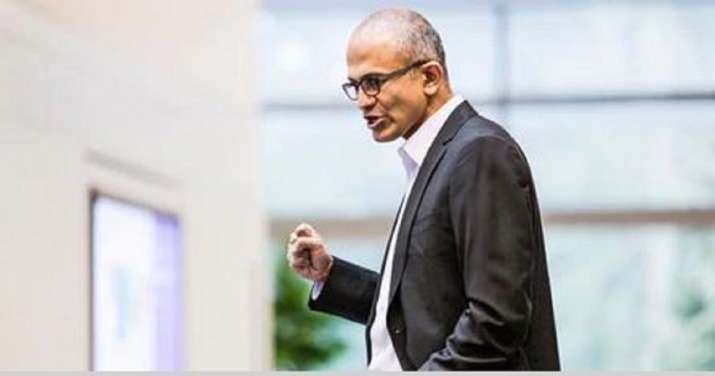 Meanwhile, Microsoft extended an olive branch and issued a softer statement in reference to what Satya Nadella had said.

"Every country will and should define its borders, protect national security and set immigration policy accordingly. And in democracies, that is something that the people and their governments will debate and define within those bounds. I'm shaped by my Indian heritage, growing up in a multicultural India and my immigrant experience in the United States. My hope is for an India where an immigrant can aspire to found a prosperous start-up or lead a multinational corporation benefitting Indian society and the economy at large."

Earlier, a group of nearly 150 Indian-origin professionals had posted an open letter against the amended Citizenship Act and a possible nationwide National Register of Citizens. The professionals, employed with Google, Facebook, Uber and Amazon had termed both the laws as 'facist'. In this regard, Nobel laureate Amartya Sen too had stressed the relevance of Opposition unity for carrying any protests in connection with CAA or NRC.

Why is Citizenship Act controversial?

The Bill, on December 9 amended the Citizenship Act of 1955, which granted eligibility to Indian citizenship to illegal migrants who are Hindus, Sikhs, Buddhists, Jains, Parsis and Christians from Afghanistan, Bangladesh and Pakistan, and who entered India on or before 31 December 2014. The bill does not include Muslims.

The legislation, which has come into force from January 10, has led to intense protests across the country since December when the legislation was passed by Parliament, with students coming out on the streets in thousands in almost all the states. Civil society members, opposition parties and commoners have also joined the protests.