The 30,000 MW hybrid renewable energy park will be the world's largest with both windmills and solar panels being set up to generate power.

Prime Minister Narendra Modi on Tuesday laid the foundation stone of the world's largest renewable solar and wind energy 30,000 megawatts (MW) Ultra Mega Hybrid Park in Gujarat's Kutch. Besides, he also performed a virtual ground-breaking ceremony for four other desalination plants along the Arabian Sea coast. The plants will come up at Gundiyali in Kutch, Gandhvi in Devbhumi Dwarka, Ghogha in Bhavnagar, and Sutrapada in Somnath. Gujarat Chief Minister Vijay Rupani was present on the occasion.

According to a government release, PM Modi will also interact with farmers and artisans from the tent city of Dhordo in the district. 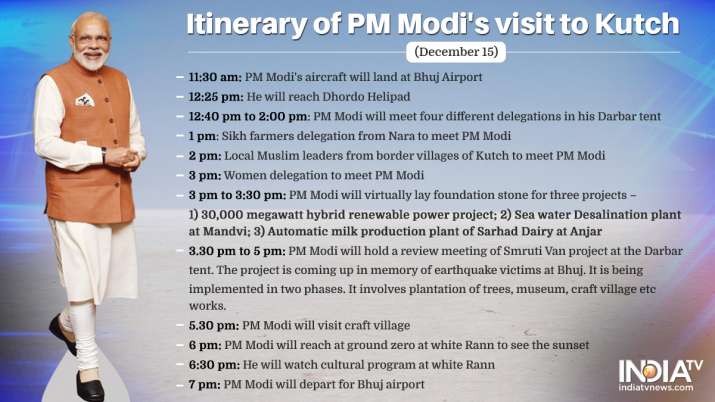 PM Modi also laid the foundation stone for the Rs 129-crore fully automated dairy plant under the Centre's Rashtriya Krishi Vikas Yojana. As the then CM, Modi had set up the district's first dairy plant with 2 lakh litre processing capacity in 2013-14.

Earlier, milk from the plant was carried to the Amul plant at Gandhinagar for processing. With the new plant, another 2 lakh litre milk and buttermilk will be processed and sold in Kutch under the Amul brand, said the release.

Thereafter, the prime minister will interact with farmers, including Punjabi peasants cultivating their lands in Kutch district, it said. He will also interact with Kutchi artisans, and review a memorial park being built in Bhuj in memory of the 2001 earthquake victims. The PM is scheduled to return to New Delhi late in the evening, the release said.