Cyclone Amphan: Large parts of Kolkata and other affected districts were without electricity as power poles had been blown up. Mobile and internet services were also down as the cyclone had damaged several communication towers. Senior state officials said it was too early to estimate a toll on life or damage to property as the hardest-hit areas were still not accessible.

Cyclone Amphan has left a trail of destruction in Odisha and West Bengal. Visuals of Kolkata Airport showed many parts flooded and many structures flooded. The extremely severe cyclone 'Amphan' claimed as many as 12 lives in Bengal and blew up shanties. Thousands of trees were seen uprooted, while low-lying areas have been swamped. There are unconfirmed reports of eight more deaths from various parts of the state.

All flight operations at Kolkata Airport were on Wednesday suspended till 5 am today, in view of cyclone Amphan. Runways and hangars were seen flooded, while the roof in one part of the airport had caved in.

An aircraft was seen in knee-deep water. Two hangars have been damaged beyond repair, but they were unused, according to officials.

Meanwhile, large parts of Kolkata and other affected districts were without electricity as power poles had been blown up. Mobile and internet services were also down as the cyclone had damaged several communication towers.

Senior state officials said it was too early to estimate a toll on life or damage to property as the hardest-hit areas were still not accessible.

According to the weatherman, Amphan is the fiercest cyclone to hit the state in the last 100 years. 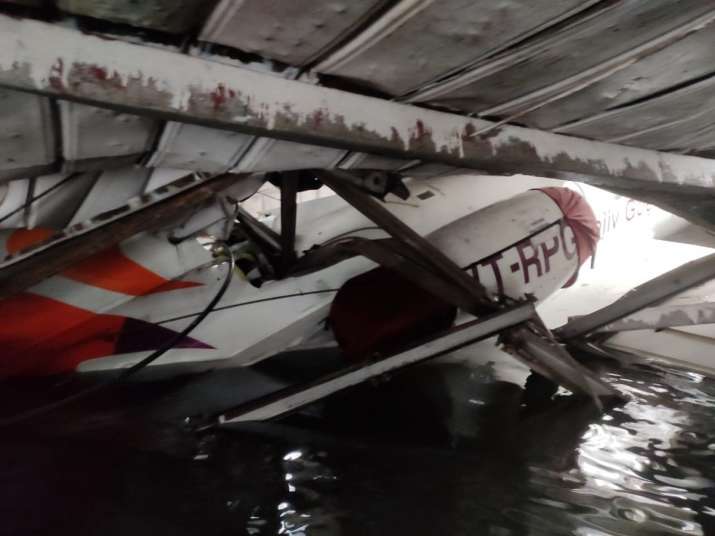 Packing heavy rain and winds with speeds of up to 190 kmph, extremely severe cyclone Amphan slammed the Digha coast of West Bengal at 2.30 pm on Wednesday, triggering heavy rainfall and gusting in various parts of the state.

West Bengal Chief Minister Mamata Banerjee, who has been monitoring the situation at state secretariat Nabanna since Tuesday night, said the impact of Amphan was "worse than coronavirus".

While a man and a woman were killed when trees came crashing down on them in North 24 Parganas district, a 13-year-old girl died in a similar incident in adjoining Howrah, officials said.

Four persons were killed in Hooghly and North 24 Paraganas districts due to electrocution, they said.

A woman and her seven-year-old son were killed in the Regent Park area of Kolkata after a tree fell on them, while two persons died due to electrocution in the Behala area, the officials said.

They said a person was killed in Kolkata after being hit by a flying object during the storm.

The districts of East Midnapore, Howrah, North and South 24 Paraganas along with the state capital has been the worst hit.

Strong winds with speed up to 125 kmph per hour upturned cars in Kolkata and felled trees and electricity poles blocking important roads and intersections.

At Kolkata central avenue, a small concrete temple situated at the base of a banyan tree was uprooted.

More than 500 trees, along with few hundred electric posts, traffic signals and police kiosks have been uprooted, said a KMC official.

Reports arriving in Kolkata from North and South 24 Parganas and East Midnapore said roofs of thatched houses were blown away, electric poles got twisted and hundreds of trees broken and uprooted.

Thousands of people have been rendered homeless in these districts due to the cyclone last night, officials said.

According to officials, more than 1000 mobile towers across the state and city have been completely destroyed.

Streets and homes in low lying areas of Kolkata were swamped with rainwater.

Portions of several dilapidated buildings came crashing down in Kolkata and other parts of the state.

Embankments in Sundarban delta - a UNESCO site - were breached as the surge whipped up by the cyclone inundated several kilometers of the Island.

Four jetties in South 24 Paraganas have collapsed last night due to the storm.

According to the state agricultural department, paddy crop in districts of Burdwan, West Midnapore and Hooghly has been completely destroyed due to the monstrous cyclone.

In several shelter homes in the districts, people were seen jostling for food and shelter giving a thumbs down to social distancing norms due to the COVID pandemic.

More than five lakh people have been evacuated to safety by the state government.