India records 0.2 COVID-19 deaths per lakh population as against global figure of 4.1

India has so far about 0.2 COVID-19 deaths per lakh population as against the global figure of 4.1, the Union health ministry said on Tuesday, even as the number of fatalities due to coronavirus infection in the country rose to 3,163 and the total cases climbed to 1,01,139.

India has so far about 0.2 COVID-19 deaths per lakh population as against the global figure of 4.1, the Union health ministry said on Tuesday, even as the number of fatalities due to coronavirus infection in the country rose to 3,163 and the total cases climbed to 1,01,139. Also, a record number of 1,08,233 samples were tested for COVID-19 on Monday in the country. So far, a total of 24,25,742 samples have been tested, the ministry said. 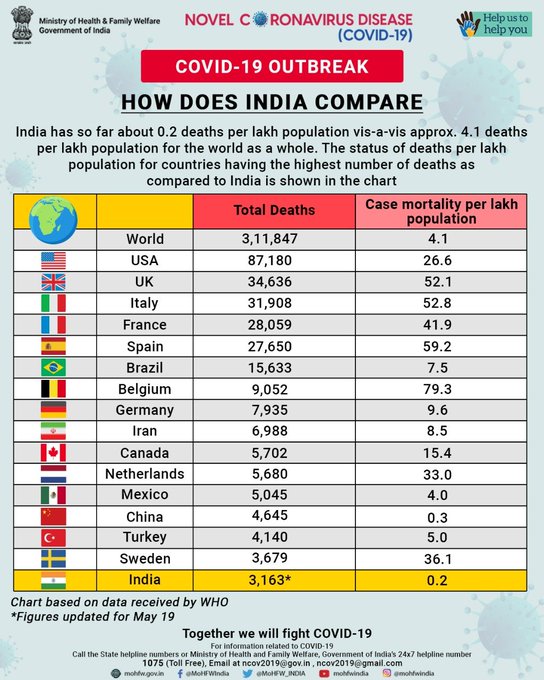 An increase of 134 deaths and 4,970 cases of coronavirus infections was recorded in a 24-hour span since Monday 8 am, according to the health ministry.

It took 64 days for COVID-19 cases in India to touch the 1 lakh-mark from 100, more than double the time taken in the US and Spain which have been hit hard by the pandemic.

According to the data sourced from the health ministry and Worldometers, in the US, coronavirus infection cases increased from 100 to 1,00,000 in 25 days, while it took 30 days for the cases to reach the 1 lakh-mark in Spain.

It took 35 days in Germany, 36 days in Italy, 39 days in France and 42 days in the UK for the coronavirus infection cases to rise from 100 to 1 lakh respectively.

Referring to data from WHO situation report-119, the health ministry said 3,11,847 COVID-19 mortalities have been reported worldwide which is about 4.1 deaths per lakh population.

China, which so far has recorded 4,645 casualties due to COVID-19 so far has approximately 0.3 deaths per lakh population.

On testing, it said from one laboratory conducting COVID-19 test in January, India has very rapidly increased its capacity by adding over 385 government laboratories and 158 private laboratories.

Other testing machines like TrueNAT and CBNAAT have also been mobilised to ramp up testing.

Through 14 AIIMS-like mentor institutions, handholding of labs across the country is undertaken to ensure adequate bio-safety standards and accreditation of the laboratories, the ministry said.

"This has helped in maintaining steady supplies across the country," the ministry said.

The number of active COVID-19 cases stood at 58,802 while 39,173 people have recovered and one patient has migrated, it said, adding the recovery rate is improving continuously.

"Thus, around 38.73 per cent patients have recovered so far," a senior health ministry official said.

The total confirmed cases include foreigners.

Meanwhile, the Union health ministry issued guidelines for dental professionals in view of the ongoing pandemic, saying dental clinics in the COVID-19 containment zones will remain closed, however, they can continue to provide teleconsultation to patients.

Stating that dentists, auxiliaries as well as the patients undergoing dental procedures are at high risk of cross-infection as most dental procedures require a close contact with the patients' oral cavity, saliva, blood and respiratory tract secretions, the ministry has advised that all patients must be treated with due precautions.

Also, five hospitals have enrolled so far for an observational study being conducted by ICMR to assess the efficacy of anti-malarial drug hydroxychloroquine as a preventive medication against COVID-19 among healthcare personnel.

Fatalities continued to rise in the country and of the 134 deaths reported since Monday morning, 51 were in Maharashtra, 35 in Gujarat, 14 in Uttar Pradesh, eight in Delhi, seven in Rajasthan, six in West Bengal, four in Madhya Pradesh, three in Tamil Nadu, two each in Punjab and Jammu and Kashmir, and one each in Bihar and Telangana.

The death toll reached 37 each in Karnataka and Punjab and 35 in Telangana.

Jammu and Kashmir has reported 15 fatalities due to the disease, Haryana has 14 deaths while Bihar has registered nine and Kerala and Odisha each have reported four deaths.

Meghalaya, Uttarakhand and Puducherry have reported one fatality each, according to the data provided by the ministry.
According to the ministry's website, more than 70 per cent of the deaths are due to comorbidities, the existence of multiple disorders in the same person.