Rohingya crisis: Aung San Suu Kyi says will talk to those who fled, who stayed; India calls it 'positive message'

The Nobel Peace laureate's global image has been damaged by violence since Rohingya insurgents attacked Myanmar security forces on August 25.

After an exodus of Rohingya Muslims sparked allegations of ethnic cleansing, Myanmar leader Aung San Suu Kyi on Tuesday said that her country does not fear international scrutiny.

She told the world that even with an estimated 412,000 Rohingya fleeing to Bangladesh in less than a month as their villages burned and hundreds were killed, the "great majority" of Muslims within the conflict zone stayed and that "more than 50 per cent of their villages were intact."

Rohingya crisis: Pak should take away Rohingyas as JeM chief is fond of them, says Giriraj Singh

The Nobel Peace laureate's global image has been damaged by violence since Rohingya insurgents attacked Myanmar security forces on August 25.

The government has blamed the Rohingya themselves, but members of the persecuted minority have said soldiers and Buddhist mobs attacked them.

Suu Kyi told foreign diplomats gathered for her speech in Naypyitaw, the capital, that the government was working to restore normalcy in the area.

"Nevertheless we are concerned to hear that numbers of Muslims are fleeing across the border to Bangladesh," she said. "We want to understand why this exodus is happening. We would like to talk to those who have fled as well as those who have stayed."

She said she it would be helpful to understand why conflict did not break out everywhere. She invited the diplomats with visit villages that weren't affected so they could learn along with the government "why are they not at each other's throats in these particular areas."

Rohingya now in camps in Bangladesh the implication that Rohingya who were driven from their villages were themselves responsible, or that some members of the ethnic group are safe.

In the Kutupalong refugee camp, Abdul Hafiz said Rohingya once trusted Suu Kyi more than the military that not only ruled for half a century before, but also held her under house arrest for many years. Now Hafiz calls Suu Kyi a "liar" and says Rohingya are suffering more than ever.

He said Suu Kyi should give international journalists more access to their destroyed villages. If Rohingya are proven wrong that they were attacked, he said, "we will not mind if the world decides to kill us all by pushing us into the sea."

The Rohingya have had a long and troubled history in Myanmar, where many of the country's 60 million people look on them with disdain. 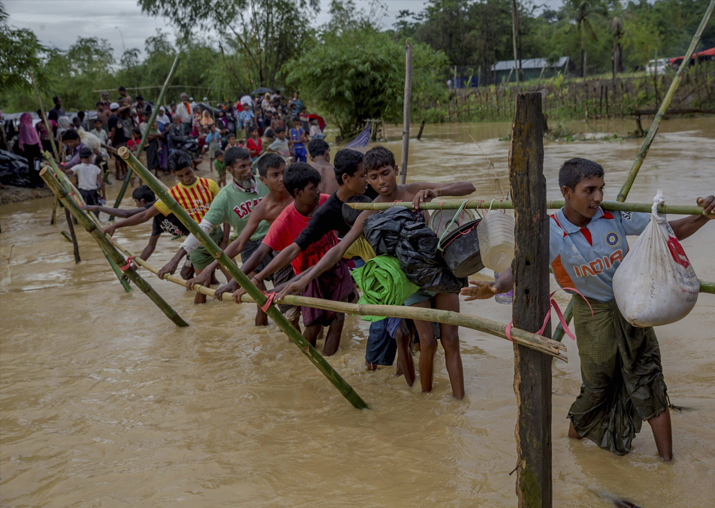 Though members of the long-persecuted religious minority first arrived generations ago, they were stripped of their citizenship in 1982, denying them almost all rights and rendering them stateless. They cannot travel freely, practice their religion, or work as teachers or doctors, and they have little access to medical care, food or education.

India has welcomed as encouraging and positive Aung San Suu Kyi's address on the situation in the country's Rakhine state where violence has triggered an outflow of hundreds of thousands of Rohingya refugees to neighbouring Bangladesh.

"It was an encouraging address and contained a very positive message," India's Ambassador to Myanmar Vikram Misri told the media after Suu Kyi's state of the union address on the issue.

"I think we all appreciate the problems and complex challenges that Myanmar faces," he said. 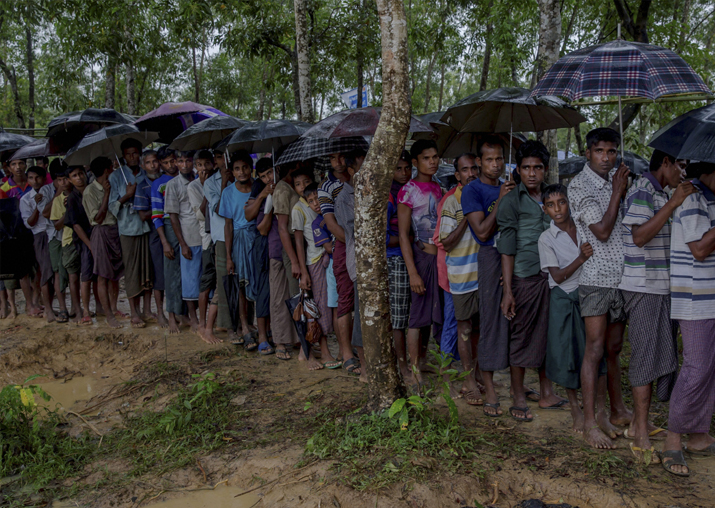 "The situation that has come about in the Rakhine state in recent days is something that has caused a lot of concern to not only people within the country but its neighbours, including us, too."

The Bangladesh government was keeping an eye on the Rohingya refugees and getting them registered to ensure that militants did not enter the country, H T Imam, Political Adviser to Bangladesh Prime minister Sheikh Hasina, said on Tuesday.

"All our agencies are keeping a close watch on the Rohingya refugees staying in Bangladesh. The government is getting them registered with all the relevant details to ensure that no militants enter Bangladesh," he told reporters.

According to a UN estimate, over 3,79,000 Rohingya Muslims have fled the Rakhine state in northern Myanmar and entered Bangladesh since August 25.

(With inputs from AP, PTI, IANS)