People are requested to plan their journey in advance accordingly and avoid the route of the Parade from 9 am to 12.30 pm.

The Delhi Traffic Police has issued a traffic advisory for commuters travelling through the route of Republic Day Parade on Wednesday as there will restrictions in place to facilitate full dress rehearsal.

According to an advisory released by the Delhi Police, the rehearsal will have the same route as that of the Parade on Republic Day on January 26. It will start at 9.50 am from Vijay Chowk and will proceed to the Red Fort.

There would be elaborate traffic arrangements and restrictions in place for smooth conduct of the Parade along the route. In order to facilitate smooth passage of the Parade, movement of traffic on certain roads leading to the route of the Parade will be restricted, the advisory said.

No traffic will be allowed on Rajpath from Vijay Chowk to India Gate from 6 pm on Tuesday till the Parade is over. There will be no cross traffic on Rajpath from 11 pm on Tuesday at Rafi Marg, Janpath, Man Singh Road till the Parade is over. C-Hexagon-India Gate will be closed for traffic from 9 am on Wednesday till the Parade crosses Tilak Marg and from 10 am on Wednesday traffic on Tilak Marg, BSZ Marg and Subhash Marg will not be allowed on both directions. Cross Traffic will only be allowed depending upon the movement of the Parade, the advisory stated.

People are requested to plan their journey in advance accordingly and avoid the route of the Parade from 9 am to 12.30 pm.

Metro services will be available for commuters at all stations on Wednesday, but there will be no boarding and de-boarding at Central Secretariat and Udyog Bhawan Metro Stations from 5 am till 12 pm, the advisory said. 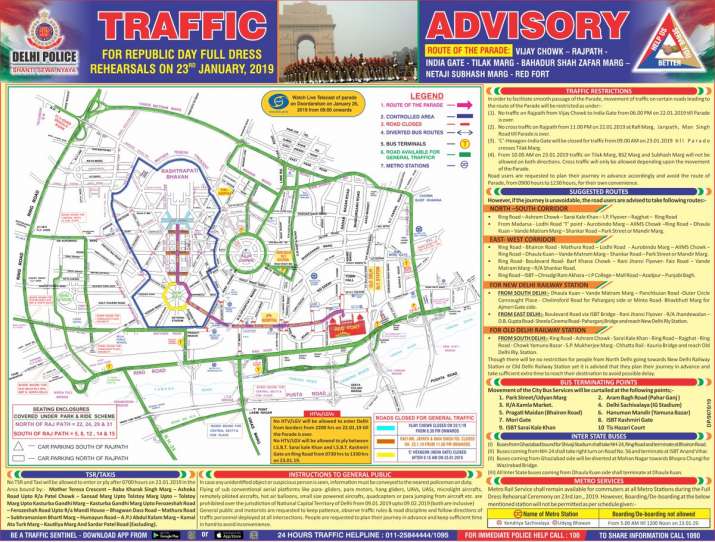 Fifty-eight tribal guests from various parts of the country, 22 tableaux of states and central government departments, and performance by school children will mark the 90-minute parade of this year's Republic Day.

The event on Saturday, where South African President Cyril Ramaphosa will be the chief guest, will begin with the laying of wreath at the Amar Jawan Jyoti at India Gate by Prime Minister Narendra Modi.

Twenty-two tableaux from various states and central government departments on developmental, cultural and historical themes will be part of this year's Republic Day parade. Some of the tableaux on cultural themes will have integrated folk dances, a Home Ministry office memorandum said.

As many as 26 national award winning children, seated in open jeeps, will also form part of the cultural pageant. Three groups of children from Delhi schools and one group of children from Eastern zone Cultural Centre will be part of the parade. Each group will give a performance of about two minutes in front of the presidential dias at Rajpath.

"The duration of the Republic Day parade 2019 will be around 90 minutes," the home ministry said.

On behalf of the Centre, 58 tribal guests from various parts of the country have been invited to witness the celebrations in Delhi. The tribal guests and tableaux artists will call on the president, the vice president, the prime minister and the tribal affairs minister. They will be taken on sightseeing tours in and around the national capital.

Four helicopters would precede the parade commander. The lead helicopter will carry the national flag and the other three choppers would carry services flags, while the echelon aircraft would shower flower petals.