Congress suffers from fear of unknown, creating fictional fear that Dalits are being killed: PM Modi

Addressing an event organised by the Maharastra state BJP on the occasion of 43rd anniversary of Emergency, PM Modi said Congress suffers from 'fear of unknow'.

Congress suffers from fear of unknown, Prime Minister Narendra Modi said on Tuesday while attacking the main opposition party for creating false atmosphere of threat to Dalits in the country. Speaking at an event organised by the Maharashtra BJP on the occasion of 43rd anniversary of Emergency, the PM came down hard on the the Congress slamming the 'first family' for pushing the country into a 'dark age' for personal gains.

PM Modi, who has been a bitter critic of the move to impose Emergency by the then Prime Minister Indira Gandhi in 1975, said," They (Gandhi family) never imagined that corruption charge could be framed against them in court and they would have to seek bail, so now they are trying to scare the judiciary by bringing impeachment motion against Chief Justice of India."

'Dark age' of Emergency should be part of curriculum: Vice President

India remembers Emergency as dark period during which every institution was subverted: Modi

"Those who speak of protecting the Constitution turned the country into a jail for the sake of "one family" by imprisoning prominent opposition leaders during Emergency," PM Modi added while describing Emergency as a black spot on country's history.

Modi accused the Congress for criticising EVMs and the functioning of the Election Commission after they were reduced to 44 seats from 400 in Lok Sabha. "They did not question the EVMs after the recent Karnataka elections," he added.

12:25 pm: The party which has no internal democracy cannot be expected to adhere to the ideals of democracy, PM Modi says attacking the Congress for imposing Emergency in the country in 1975.

12:21 pm: Congress suffers from fear of unknown. They are now creating an atmosphere in the country to claim that Dalits are being killed, says PM Modi.

12:20 pm: They didn't even spare legendary singer Kishore Kumar. The movie ‘Aandhi’ was also banned by them because they were afraid, says PM Modi.

12:15 pm: They never imagined that corruption charge could be framed against them in court and they would have to seek bail. So now they are trying to scare the judiciary by bringing impeachment motion. Their mentality now is the same as it was during Emergency, says PM Modi.

12:12 pm: Youth today do not have an idea of what happened during Emergency. They will not know that how living without freedom can be: PM Modi in Mumbai 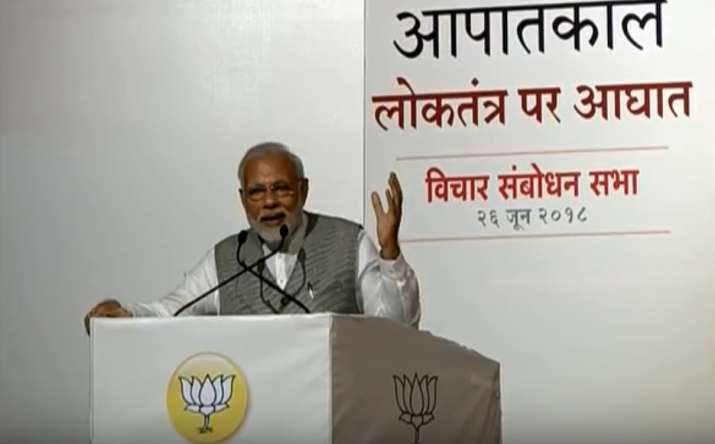 12:07 pm: The country never thought that just for lust for power and servility to one family, India would be made into one big jail. Every person lived in fear. Constitution was misused: PM Modi on Emergency.

11:58 am: We remember this date not only to highlight the atrocities during Emergency days but also the sins committed by the Congress: PM Modi

11:55 am: I thank BJP's Maharashtra unit for giving me an opportunity to speak on a day like this. June 25 is a black day in country's history when Emergency was imposed in the country: PM Modi

In his monthly radio programme 'Mann Ki Baat' on June 25 last year, Modi had referred to the Emergency, saying "such a black night cannot be forgotten."

The Prime Minister had said it was essential to remember the incidents which have caused harm to the democracy and move ahead towards the positive qualities of democracy.


The imposition of the Emergency had evoked a nationwide outrage and triggered a mass movement which forced Gandhi to lift it in 1977.

Read this article in HINDI