Here's why Bihar's Kosi Rail Mahasetu is historic in many ways

The 1.9 kilometres long, Kosi Rail Mega Bridge was constructed at a cost of Rs 516 crore. The project Kosi Rail Mahasetu was sanctioned in 2003-04, is of strategic importance for Bihar along the India-Nepal border.

After nearly 90-year-long wait, Railway infrastructure in Bihar today got a big boost as Prime Minister Narendra Modi inaugurated the strategically important and historic Kosi Rail Mega Bridge along the India-Nepal border and electrification projects. The 1.9 kilometres long, Kosi Rail Mega Bridge has been constructed at a cost of Rs 516 crore. The project was sanctioned in 2003-04. The Kosi Rail Mahasetu cuts an otherwise 300-km long journey between Samastipur and Jaynagar on Indo-Nepal border to just 22 km.

"These projects, worth almost Rs 3000 Crores, will not only strengthen Bihar's rail network but also strengthen West Bengal and eastern India's rail connectivity. I congratulate everyone," said PM Modi at the inauguration of various railway projects in Bihar, via video-conferencing.

"In the last 6 years, efforts are being made to shape Indian Railways as per the aspirations of New India & expectations of 'Aatmanirbhar Bharat.' Vande Bharat - a symbol of modernity and self reliance - the made in India trains are becoming part of rail network," PM Narendra Modi added.

Kosi Rail Mega Bridge is of strategic importance along the India-Nepal border. The project was completed during the COVID-19 pandemic where the migrant labour also participated in its completion, a government release said.

Why Kosi Rail Mahasetu is historic for Bihar

The government called the completion of the Kosi Rail Mahasetu a watershed moment in the history of Bihar and the entire region connecting to the North East.

In 1887, a meter gauge link was built in between Nirmali and Bhaptiahi (Saraigarh). During the heavy flood and severe Indo Nepal earthquake in 1934, the rail link was washed away and thereafter due to meandering nature of river Kosi no attempt was made to restore this Rail link for long period.

The Kosi Mega Bridge line project was sanctioned by Government of India during 2003-04. The Kosi Rail Mahasetu is 1.9 KM long and its construction cost is Rs. 516 Crore. This bridge is of strategic importance along the India-Nepal border. 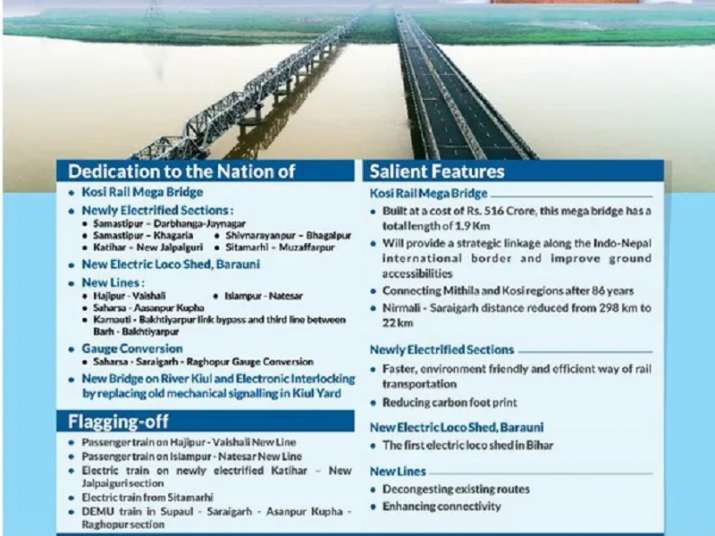 The complition of Kosi Mega Bridge project will fulfil the 86-year-old dream and the long wait of the people of the region. Along with the dedication of the Mahasetu, the PM Modi also flagged off the Saharsa- Asanpur Kupha demo train from the Supaul Station.

Once the regular train service begins, this would prove to be highly beneficial to the Supaul, Arariya and Saharsa districts. It would also make it easy for long distance travel to Kolkata, Delhi and Mumbai for the people of the region.