Preksha Mehta hanged herself from the ceiling fan at her home in Indore and left a suicide note on Instagram.

Crime Patrol actress Preksha Mehta committed suicide on Monday night. Preksha left a heartbreaking note on Instagram before ending her life. The Television actress hanged herself from the ceiling fan at her home in Indore. Preksha's father found her dead on Tuesday morning and rushed her to the hospital, where she was declared dead. Besides Crime Patrol, Preksha has acted in TV shows such as Meri Durga and Laal Ishq. She had moved to Mumbai two years ago. Earlier, Kuldeepak actor Manmeet Grewal committed suicide due to financial crisis amid the ongoing lockdown 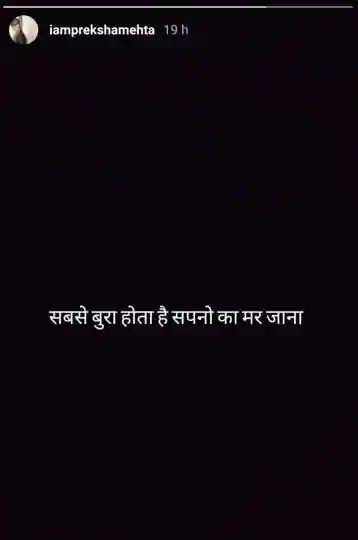 According to a report published in SpotboyE, Preksha was under tremendous stress because of work. The 25-year-old actress left behind a suicide note that read: "Sabse bura hota hai sapno ka mar jaana (The worst thing is when dreams die).” It is a part of a poem by Punjabi poet Pash, also known as Avtar Singh Sandhu.

Officer in charge of the Hira Nagar police station Rajeev Bhadoriya said: “Preksha was a TV actor and was in the city since the lockdown. We are investigating the case further to know the reason of her suicide.”

Hello Guyzz Happy Holi Everyone 🎉 Enjoy My Episode of Crime Patrol Tonight 10:30pm only on SonyTv 😎 Me as Shelly

Preksha's Meri Durga co-star Shrishti Jain expressed mourned her death. Speaking exclusively to India TV, she said, "I know these are very tough times for all of us, each and every human being is going through this, some of us are lucky enough to be able to be safe in our house. Let us all pray for the well being of those who are trying to reach their home. Please stay strong, prayers for everyone".

"I did not know her personally, but obviously it’s very saddening and shocking. My condolences and prayers for her family, May the family find the strength to bear the loss. And May god guide her soul towards healing," she added.

TV actor Manish Naggdev, who has worked in shows such as Begusarai, Geet among others also expressed his grief on Preksha's demise. "Condolences to her family.I didn’t know her but actors or anybody for that matter should not loose hope,they have to fight this battle,everybody is facing problem,u have to survive anyhow,do something else for while keep urself busy,keep urself away from negative people,messages,news,negativity.Dont loose urself instead start exploring.You are a human first than you are an actor,do other things and start earning,there has to be someway out," he said to India TV.