Ankita Lokhande's beau Vicky Jain gets hateful messages post Sushant's death, this is how he reacted

After Sushant Singh Rajput's death, fans searched for ex-girlfriend Ankita Lokhande's reaction with whom he worked in daily soap 'Pavitra Rishta.' Now her current beau Vicky Jain, who has been receiving hateful messages online has taken this step to keep all the negativity away.

Actor Sushant Singh Rajput's sudden demise sent shockwaves to the country. Not just his family or friends even his fans could not believe the news of his suicide. Ever since there has been a discussion going on in the industry and on social media as to why he took such a drastic step on June 14. Not only this, but an investigation is also underway and Mumbai Police is probing each and every angle related to the late actor. As soon as the sad news of his demise came, the first reaction that fans searched for was that of his ex-girlfriend Ankita Lokhande with whom he even worked in daily soap 'Pavitra Rishta.' Her social media profile was stalked and she even received hatred for not sharing a post on his death. Well now, another person has fallen prey to a similar kind of online hatred and he is none other than the actress's current boyfriend and business Vicky Jain, who ever since the actor's death has been receiving hateful messages on various social media platforms.

Ankita's beau Vicky has been at the receiving end of both hatred and concern. On one hand, there were people who asked him to 'leave Ankita' while on the other, there were some who thanked him for being so supportive during the difficult times. As a result of this negativity, Vicky as per the latest reports has switched off his comments on Instagram account in order to avoid negative comments, and haters spitting venom.

There were a lot of hurtful comments saying, "Please leave Ankita," "You are responsible for Ankita and Sushant's breakup," and others. While the people who supported him wrote, "Pls Ankita didi ka dhyan rakhna... I hope woh theek ho unhe bolna be strong jo woh hai," "Sir please ignore all these negative comments. Lots of love to you and Ankita ma'am. She's such a genuine person, please tell her there are people out there who loves her for what she is. Hope God gives her enough strength to cope with this situation."

Sushant's close friend Sandip Ssingh in an interview with Spotboye revealed, "I spoke to her (Ankita) today, finally. I was away from her for 3-4 days for a reason and today also when she called me, she started crying. And I can't take it anymore because I don't want to see her like that. But she is a strong girl and a God's child. Her talent is a blessing just like Sushant. I can't tell you what they meant to each other." 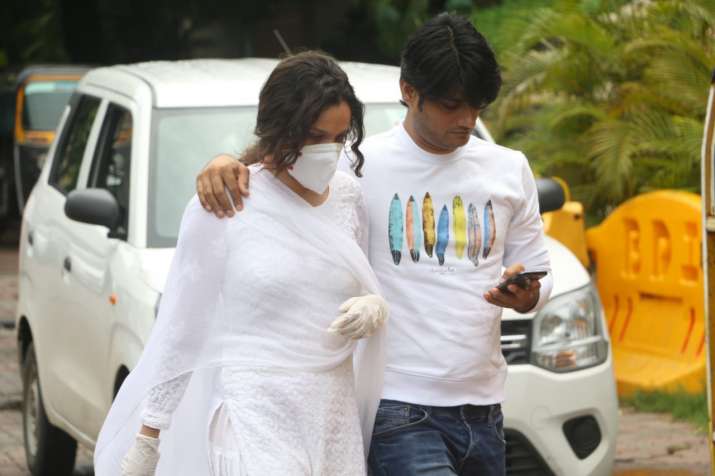 Previously, it was Pavitra Rishta actress Prarthana Behere who spoke about Ankita's reaction on Sushant's death and told TOI, "I can tell this about Ankita, she is devastated and crying like hell, but one needs to understand everyone had moved on in their life. News sunne ke baad woh wahin atki paddi hai... But she has someone in her life now and she has to respect that relationship also. She wanted to go, but everyone knows she is very emotional and sensitive. She is crying and how. When I posted on the Pavitra Rishta group let's go and see Sushant for the last time, then we got to know that only 20 people can attend the funeral."

Coming back to Ankita and Vicky, there were certain photos on Instagram that claimed that the two have got engaged. Previously, while talking about the love of her life, Ankita told a portal, "Love is really important for me because I believe in it. I believe in giving love to everyone, including my family, dogs and myself, and not just the person I get married to. Relationships are very important because that's the bond you share with someone and that's how love grows between people."

Talking about her marriage plans with Vicky, she said, "Marriage has always been my dream. I have always wanted to get married. But at this point, my priorities have changed. I am really looking forward to more films."