On Bollywood's powerhouse of talent, Ranbir Kapoor's birthday today, not just his mother Neetu Kapoor and sister Riddhima Kapoor Sahni, but also a number of celebrities including Arjun Kapoor, Kareena Kapoor Khan and even fans poured in wishes over social media.

One of the most bankable stars in Bollywood, Ranbir Kapoor, who will be turning 39 on Tuesday, is a name that has time and again engaged audiences in his work due to his striking screen presence, stellar performances, and impeccable acting chops. In a career spanning over 14 years, Ranbir, the grandson of the Indian film industry's 'Greatest Showman' Raj Kapoor and son of late Rishi Kapoor, has carved his niche as an actor with his diverse character choices. He made his Bollywood debut with Sanjay Leela Bhansali's 'Saawariya' in 2007 and since then he has given his fans an expansive range of performances.

On his birthday today, not just his mother Neetu Kapoor and sister Riddhima Kapoor Sahni, but also a number of celebrities including Arjun Kapoor, Kareena Kapoor Khan and even fans poured in wishes over social media.

Taking to Instagram, Riddhima shared a group picture featuring her daughter, mother, birthday boy and his girlfriend Alia Bhatt. Alongside, she wrote, "To my ‘rockstar’ bro -Here’s wishing you a very happy b’day !!!!! We love you so much #youngerbutwiser."

Arjun Kapoor shared a throwback photo with the actor and his friends and wrote, "This picture only reminds me that I need better pictures with the birthday boy...@aliaabhatt I think you must do the needful ma’am... PS - Also just realised my confidence at 21 knew no bounds just see my chest flaunting abilities (sic)."

Bebo shared a picture of the birthday boy with Taimur and wrote, "Happy Birthday Legend." 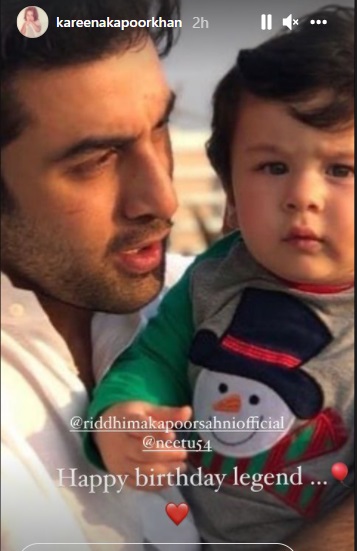 Ayushmann Khurrana also wished 'RK' on his birthday by sharing a picture on his Instagram story. 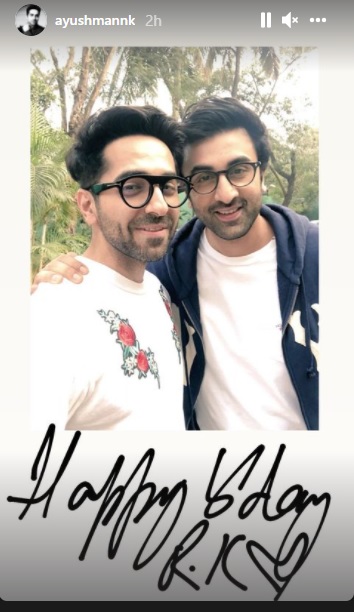 Have a look at how fans showed their love for the 'Barfi' actor:

Speaking about Ranbir's future projects include Karan Malhotra's directorial 'Shamshera', which is said to be a dacoit drama set in the 19th century. It will chronicle the story of a dacoit tribe fighting for their right and independence from the British.

He will also be seen in Luv Ranjan's next directorial venture opposite Shraddha Kapoor and 'Brahmastra' which features Alia Bhatt and Amitabh Bachchan.