Virat Kohli and Anushka Sharma are teaming up for yet another advertisement and we can't wait to watch the same.

Bollywood actress Anushka Sharma and captain of the Indian Cricket team Virat Kohli got married in a hush-hush wedding ceremony in Italy on December 11, 2017. Ever since then, their fans die to watch them together on-screen and are always waiting for their pictures or videos together. It is a known fact that the two met during the shooting of an ad. Not only this, they have even shot for various Manyavar advertisements which depict their off-screen chemistry very well on the screen.

Well now, the duo is all set to return together through another ad which will be directed by Abhishek Varman. A picture of two shooting the same has been doing round son the internet. The photo happens to be a monochromatic one in which Anushka is seen wearing a dress while Virat is in a shirt. Have a look: 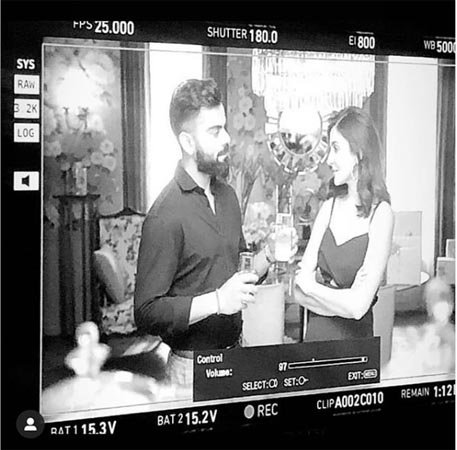 The Indian skipper in an interview to Indian Express revealed his favourite film of Anushka Sharma and said, “Ae Dil Hai Mushkil, hands down. That character for me is my most favorite ever. I mean I still tell her often even now. Sometimes I sit down and open Youtube and watch that sequence of when she has cancer and the whole thing where Ranbir (Kapoor) comes back…. that song is etched in my heart. It is never gonna be going anywhere.”

Anushka and Virat will soon be celebrating their two-year anniversary on December 11.