While the BJP is seeking a record fourth term under Shivraj Singh Chouhan in Madhya Pradesh, Chief Minister Lal Thanhawla is seeking a third consecutive term in Mizoram.

Voting for the assembly elections in  Madhya Pradesh and Mizoram have concluded. While the ruling Bharatiya Janata Party (BJP) is seeking a record fourth term under Shivraj Singh Chouhan in Madhya Pradesh, the Congress is hoping to protect its last bastion in the northeast - Mizoram.

Polling was held from 8 am to 5 pm in 227 seats, while in three Assembly segments of Lanji, Paraswada and Baihar in the Naxal-affected Balaghat district, the voting time was from 7 am to 3 pm.

'They're abusing my aged mother after failing to challenge me': PM Modi blasts Congress at MP rally

As many as 2,899 candidates, including 1,094 Independents, are in the fray for the 230-seat Assembly, but the main contest is between the Congress and BJP – the Big Two of MP politics. The state has 5.04 crore eligible voters.

Over three lakh government employees, including nearly 45,000 women, are on poll duty across the state.

As many as 1.80 lakh security personnel, including those drawn from central paramilitary forces, were deployed to ensure free and fair polls.

More than 75% voter turnout was recorded in Mizoram. No untoward incident was reported from any part of the state, but snags in electronic voting machines led to delays in the polling process in some booths. Long queues of enthusiastic voters were seen outside many polling stations early in the day.

The Congress and the Mizoram National Party (MNF) have ruled Mizoram since 1987 when it became a full-fledged state. Interestingly, no party has been able to form government thrice since that year.

Elections to the 40-member assembly in Mizoram, which has a population of about 10 lakh, is significant for the BJP that considers it to be the 'final frontier' in the region.

In the 2013 elections, the Congress had won 34 seats, while its main opposition, the Mizo National Front (MNF), got five and the Mizoram People's Conference bagged one seat.

HERE ARE THE HIGHLIGHTS OF ASSEMBLY ELECTIONS IN MADHYA PRADESH, MIZORAM

5:00 pm: About 71 per cent votes cast at the end of polling in Mizoram: state Chief Electoral Officer Ashish Kundra.

04:50 pm: Criticising the malfunctioning of some Electronic Voting Machines (EVM) during the ongoing Madhya Pradesh assembly elections, West Bengal Chief Minister Mamata Banerjee on Wednesday claimed that providing faulty EVMs was a ploy to manipulate people's votes, news agency IANS reported. Taking a swipe at the Election Commission, Ms Banerjee said it is the responsibility of the constitutional body to ensure that none of the EVM or VVPAT machines used during polling are faulty, according to IANS.

03:30 pm: MP Assembly Polls: 50% voter turnout recorded till 3 pm in Madhya Pradesh. Around 745 EVMs and Voter Verifiable Paper Audit Trail (VVPAT) machines were replaced after complaints of technical snags, MP's Chief Electoral Officer (CEO) V L Kantha Rao said.  Polling is being held from 8 am to 5 pm in 227 seats, while in three Assembly segments of Lanji, Paraswada and Baihar in the Naxal-affected Balaghat district, the voting time is from 7 am to 3 pm.

03:00 pm: Three poll officials found drunk, removed from duty in Mizoram: Three polling officials, including two presiding officers, in Mizoram's Lunglei district were removed from their duties after they were allegedly found in an inebriated state, attempting to assault other officials. The three persons were removed from the election duties with immediate effect and authorities concerned were asked to initiate departmental enquiries against them, a senior official at the office of the Chief Electoral Officer said.

01:42 pm: MP Assembly Polls: Congress leader Kamal Nath on showing his election symbol after casting his vote in Chhindwara: I had already cast my vote. When people asked me when those from media asked me whom I have voted for I showed this (palm). What else could have I done?Show a lotus?

01:34 pm: Mizoram Assembly Elections: Mizoram registers 49 per cent voter turnout till 1 pm. The voting for the 40-seat assembly will end at 4 pm.

01:32 pm: MP Assembly Elections: CEC OP Rawat on Jyotiraditya Scindia's request to EC to extend polling time due to EVM malfunction: There are provisions for the extension of time, the local officers can take the call as they see fit. The matter does not need to be handled by the commission. On instances of EVMs malfunctioning in Madhya Pradesh, CEC OP Rawat said there were few complaints on malfunction of some EVMs and VVPAT machines, they’ve been replaced. If it's observed that voters left due to malfunction, we can consider re-polling at that particular polling station.

01:04 pm:  MP Assembly Elections: Congress leader Kamal Nath has demanded re-polling in the booths where faulty EVMs were reported. Earlier, another Congress leader Jyotiraditya Sindia had requested EC to extend voting time at booth with faulty EVMs to ensure that people standing in queues can cast their votes.

12:47 pm: MP Assembly Elections: Attempt on the lives of poll booth workers in Bhind's Rama village. Four injured in the attack. Polling agent has reportedly accused Congress workers for the attack. Injured have been admitted to a nearby hospital.

2:10 pm: MP Assembly Polls: There have been many complaints of EVMs malfunctioning, have written to Election Commission. Have requested that voting time in these polling booths should be extended to compensate for the delay, Congress leader Jyotiraditya Scindia told media. According to reports, over 250 EVMs replaced so far in Madhya Pradesh. Figures likely to increase. 140 complaints of irregularities received during first two hours of polling.

11:54 am: Mizoram Assembly Elections: Bordered with Myanmar (510 km) and Bangladesh (318 km), mountainous Mizoram is the Congress' last bastion among the eight Northeastern states. The ruling Congress led by incumbent Chief Minister and state party chief Lal Thanhawla is determined for a third consecutive term against a stiff challenge mounted by the main opposition Mizo National Front (MNF) headed by former Chief Minister Zoramthanga. Both the Congress and MNF have fielded candidates to all the 40 Assembly constituencies.

11:49 am: Mizoram Assembly Elections: 29 per cent voting recorded in Mizoram till 11 am. Voting for all 40 seats in the state assembly began at 7 am and will continue till 4 pm. The counting will be held on December 11. The state is witnessing a direct contest between Congress and  main opposition Mizo National Front (MNF) headed by former Chief Minister Zoramthanga.

11:40 am: Mizoram Assembly Elections: The Election Commission has set up 15 special polling stations at Kanhmun, a village along the Mizoram-Tripura border, to facilitate voting by Reang tribal refugees, sheltered in Tripura for the past 21 years. Of the over 35,000 tribal immigrants, 11,232 are eligible to cast their votes in this election. "In view of the Assembly polls, the BSF (Border Security Force) and Assam Rifles troopers have been asked to further tighten the security along Mizoram's borders with Bangladesh and Myanmar to prevent any kind of cross-border movements by inimical elements," Mizoram's Joint Chief Electoral Officer Zorammuana told IANS.

11:36 am: MP Assembly Polls: Election Commission announces Rs 10 lakh each compensation for the kin of the EC officials who passed away while on election duty. Three poll booth officers passed away during polling at different centres in Madhya Pradesh today. All three had suffered from cardiac arrest.

11:34 am: MP Assembly Polls: BJP leader Kailash Vijayvargiya on his way on a horse chariot to cast his vote for the Madhya Pradesh Elections 2018 in Indore.

11:20 am: The election commission has said they received as many 100 complaints regarding faults in the EVMs. About 70 have already been replaced.

11:03 am: MP Assembly Polls: I assure you that on 11th December Congress will form the government with the blessings of the people: Jyotiraditya Scindia after casting his vote at a polling booth in Gwalior

10:47 am: PM asks voters of MP, Mizoram to exercise their franchise: Prime Minister Narendra Modi on Wednesday exhorted people of Madhya Pradesh and Mizoram to turn out in large numbers to cast their vote in the assembly elections. PM Modi took to Twitter to reach out to people in the two states, asking them to exercise their franchise in the "festival of democracy". The PM tweeted in English and Hindi to send out the message to the voters. Polling is on in the two states. "I request my sisters and brothers of Mizoram, particularly the dynamic youth of the state, to turnout in large numbers and vote," he said in one of the tweeted.

10:20 am: MP Assembly Polls 2018: One poll booth manager in Guna, two in Indore die after suffering heart attack during voting

10:10 am: MP polls a direct contest between BJP and Congress: The contest is mainly between the Bharatiya Janata Party (BJP) and the Congress, though the Bahujan Samaj Party (BSP) and the Samajwadi Party (SP) are also in the fray. Among the 2,907 candidates in Madhya Pradesh, the BJP has fielded candidates in all seats, while the Congress is contesting in 229 seats leaving one seat, Jatara in Tikamgarh district, for Sharad Yadav-led Loktantrik Janata Dal (LJD). The BSP has fielded 227 candidates and the SP is contesting in 51 seats. There are 1,102 Independent candidates. In the last elections, the BJP won 165, Congress 58, BSP four and Independents three.

09:51 am: MP Assembly Polls: Police seizes campaign material from BJP's polling agents from a polling booth in Saint Mary's, Bhopal as it was within 200 meters of a polling booth. One person taken to custody.

09:36 am: Mizoram Assembly Polls: 15% voting recorded till 9 am. Around 15 per cent voter turnout was recorded in the first two hours of polling in 40 Assembly constituencies of Mizoram, Chief Electoral Officer Ashish Kundra said Wednesday. The voting began at 7 am amid tight security and will continue till 4 pm, he said. A total of 7,70,395 voters, including 3,94,897 women, would decide the fate of 209 candidates, including Chief Minister Lal Thanhawla, who is contesting from two seats -- Serchhip and Champai South. While Thanhawla is seeking a third consecutive term in the state, the BJP, which failed to open its account in 2013 elections, is looking to uproot the Congress in its last bastion in the northeast.

09:35 am: MP Assembly Polls:Two faulty EVMs in Ujjain have been replaced, 11 VVPAT machines in Alirajpur, 5 VVPAT and 2 EVMs in Burhanpur also replaced.

09:31 am: MP Assembly Polls: We’re 100% certain that BJP will form government with an absolute majority. We have set a target of 200 seats and our lakhs of volunteers are working to make it a reality: Madhya Pradesh Chief Minister Shivraj Singh Chauhan after casting his vote in Budhni

09:17 am: Mizoram Assembly Polls: Congress chief Rahul Gandhi urges Mizroam voters to come out and vote: "My appeal to the voters of Mizoram: Your vote is not just your constitutional right, it is a blessing & a weapon. Use it wisely today! Vote for peace, prosperity and progress. My best wishes and warmest regards to all my brothers & sisters in #Mizoram," he tweeted.

09:10 am: MP Assembly Polls: It is my kind request to Madhya Pradesh voters. Vote is biggest power in democracy. make sure you cats your vote because, 'it is time for change'. Come, let us welcome the truth, reject hatred, fulfill promises, extend support, make every household happy in Madhya Pradesh, elect people's government: Congress chief Rahul Gandhi

08:30 am: MP Assembly Polls: CM Shivraj Singh Chouhan casts his vote at Sihore polling booth. Before polling the incumbent leader told media that he was confident that people of Madhya Pradesh will once again pose their faith in him. The BJP leader urged people to come out and practice their voting right. 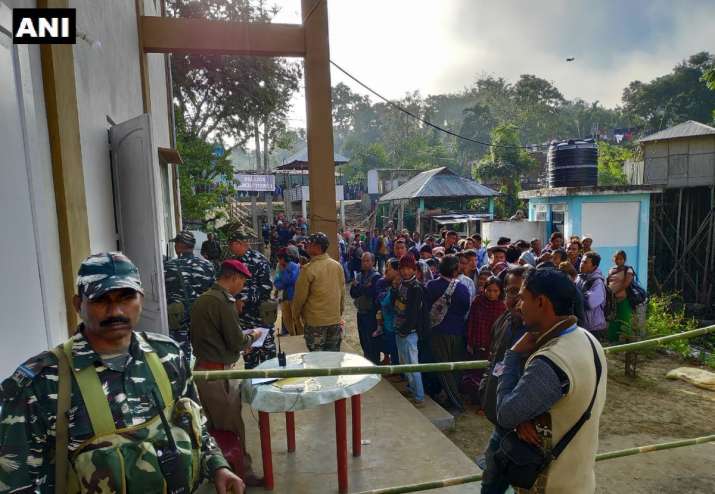 08:10 am: MP Assembly Polls: Congress leader Kamal Nath offers prayers at a Hanuman temple in Chhindwara before casting his vote at a polling booth. Earlier in the morning, incumbent CM Shivraj Singh Chouhan had also said his prayers at the banks of Narmada river, in Budhni. Voting for all 230 seats in Madhya Pradesh Assembly began at 7 am. The results of the MP Polls 2018 will be declared on December 11.

08:05 am: MP Assembly Polls: I have full faith in the people of Madhya Pradesh, they are simple and innocent people who have been robbed for a long time by BJP, says Congress leader Kamal Nath, Congress 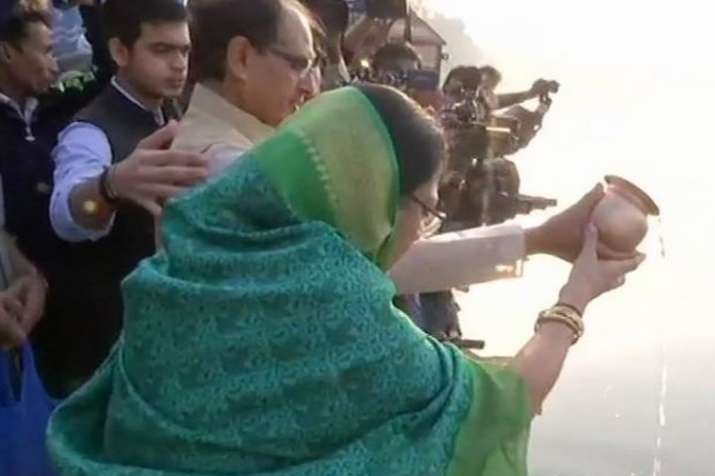