Samsung Galaxy Tab A7 offers a sleek design and enough power for your video calls. But is it worth picking up? Let's find out

The Android tablet space hasn’t been any good since the past couple of years. Samsung is the only company kicking out flagship tablets except for Apple. The problem is in the Android space, the Galaxy Tab S series is too expensive. The Samsung Galaxy Tab A7 was recently launched in India. With this, Samsung aims to provide not only good but also cheap tablets for everyday usage to the India customers.

With the lockdown restrictions in place and the SARS-CoV-2 virus infecting more and more people, the need for an affordable tablet has grown even more. However, is the Galaxy Tab A7 another failed Android tablet or is it something actually worth looking at? Let’s find out.

Samsung Galaxy Tab A7 sports a 10.4-inch IPS LCD display with an aspect ratio of 5:3. It is powered by the Qualcomm Snapdragon 662 processor paired with 3GB of RAM and 32GB of onboard storage. The storage is further expandable using a microSD card slot. It runs on Android 10 based OneUI 2.5 out of the box. All of this is backed by a 7,040mAh battery.

On the optics front, the Galaxy Tab A7 features a single rear camera setup with an 8MP lens. Upfront, there is a 5MP selfie snapper.

Samsung Galaxy Tab A7 brings a modern design to the table. The tablet’s design seems familiar. On the back, there is a smooth metal finish, which provides good looks, premium and grippy feel in the hand. 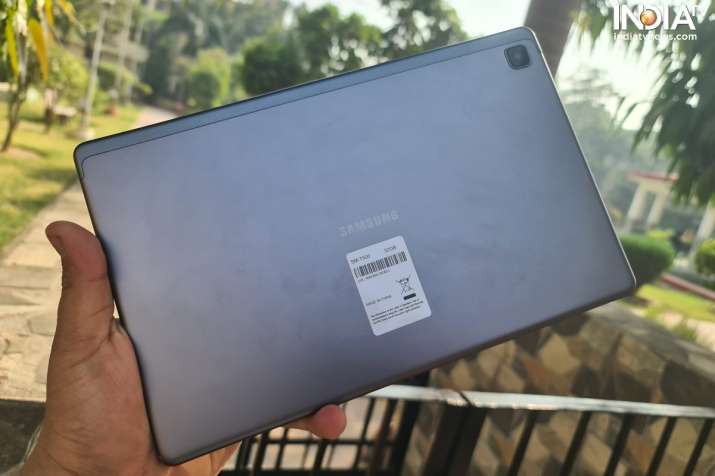 On the front, the Galaxy Tab A7 sports a 10.4-inch panel with sizable bezels which give it enough room to hold onto the tablet comfortably with two hands. The front camera is along the length, which is great while trying to do video calls on the tablet.

As for the placements, Galaxy Tab A7 sports a USB Type-C port on the bottom edge surrounded by the 3.5mm headphone jack, two speaker grills. The right edge houses the power button and volume buttons. On the left edge, there is just a microSD card tray. On the top, there are 2 other speaker grills. Lastly, there are a total of 4 speaker units inside this tablet for a great movie watching experience. 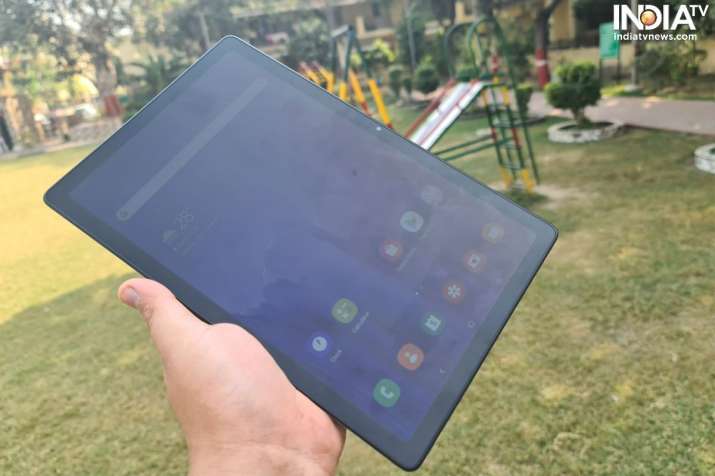 Coming back to the display, it is a 10.4-inch LCD panel with a resolution of 2000x1200 pixels. Surprisingly, the panel is not AMOLED but a regular LCD panel. The company decided to do the same just to cut corners. The display gets bright enough, but is hard to use in direct sunlight. The sharpness lacks, which is noticeable while watching movies on the tablet. However, at this price, I would accept the compromise. Overall, it's a good content consumption experience along with the quad-speaker setup.

Samsung Galaxy Tab A7 is powered by the Qualcomm Snapdragon 662 processor paired with 3GB of RAM. The RAM seems a bit less in the starting, however, I soon realized it was good enough. The long animations of Samsung’s OneUI may make the tablet-like hanging a bit, however, that’s not the case.

The Galaxy Tab A7 performs decently in most tasks. Some light gaming is manageable. In daily usage, the tablet runs perfectly fine. 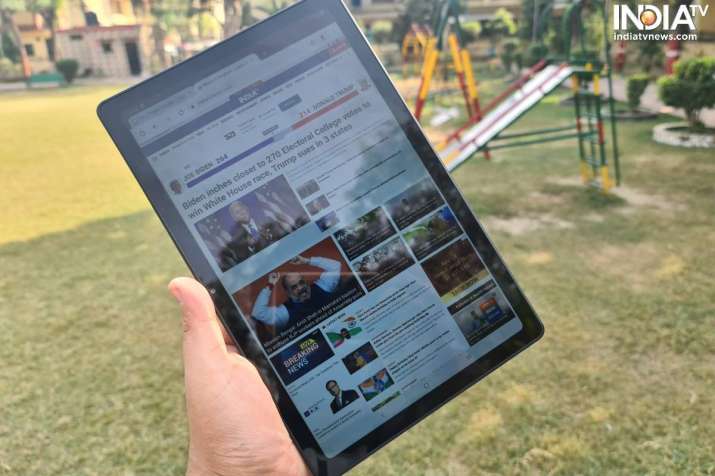 The Galaxy Tab A7 runs on Android 10 based One UI 2.5 out of the box. The user interface feels unpolished. Most of the apps render out of proportion making the software experience bad. Even Samsung's own settings app doesn't make use of all the space and opens the settings in a two-panel mode, like the earlier Samsung tabs or the iPads do. It just feels like Android as an operating system is not ready for the tablets in general. 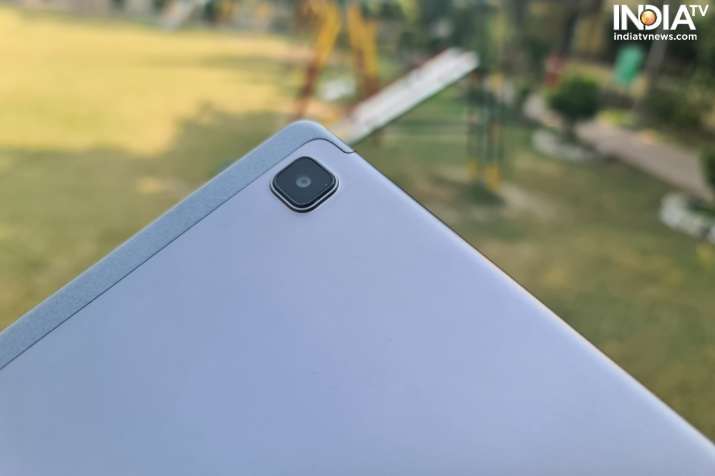 Samsung Galaxy Tab A7 sports a single rear camera setup at the back. The single 8-megapixel camera at the rear and a 5-megapixel front camera is all the tablet has.

The camera app is straightforward and anyone using a Samsung phone will feel right at home.

During our tests, the Galaxy Tab A7 managed to click some decent shots. Under good lighting conditions, the tablet managed to lock focus quickly and even picked up the natural colours. However, the camera isn't designed to click breathtaking shots. It's meant to get the job done. The front camera get’s more usage, with being used mostly for video calls.

The front camera also clicks average usable shots. The laptops at this price range do not provide any better camera so it's acceptable. 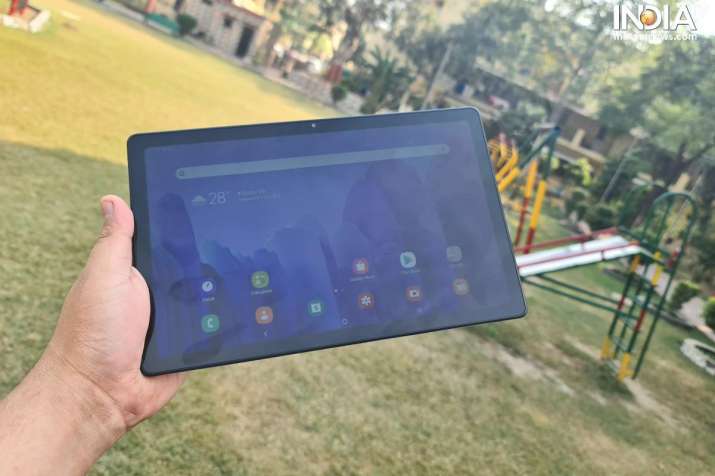 The Tab A7 comes equipped with a 7040mAH battery. With a 10.4-inch display, it may seem like much, but is not. While watching a movie at full brightness, the tablet lasts for around 5-6 hours at a stretch, while at low brightness, the normal usage lasts the battery for a couple of days, which is nice. My only gripe with the battery is the included charger. The included charger is a 5V 1.55amp  charger. That’s not even a 10-watt fast charger included. With the included charger, the tablet takes more than 4 hours to charge, which is a lot of time. 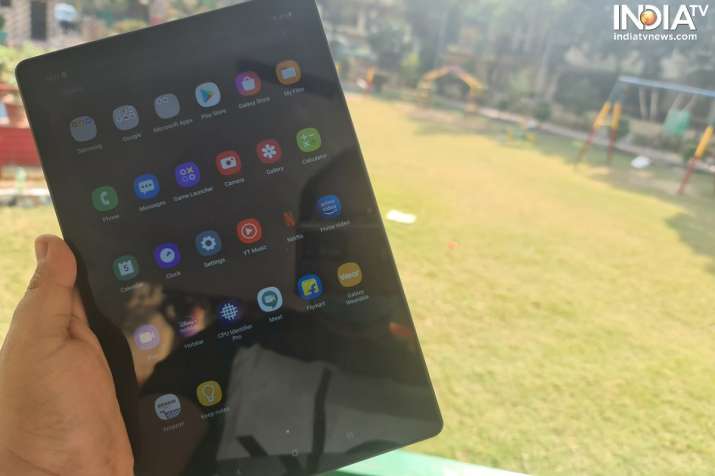 Samsung Galaxy Tab A7 is not a premium tablet, nor a tablet designed to replace your laptop. Sure, paired with a good Bluetooth keyboard, the tablet can be used to type articles, However, with its performance and as out of the box accessories, the Tab A7 is a good multimedia device. Attending video calls with the loved ones, watching movies, reading e-books or the e-newspaper, the Tab A7 is perfect for everyday usage, along with the quad-speaker setup. The Samsung Galaxy Tab A7 can provide almost a great experience if it wasn’t for the slow charger in the box.

Overall, if you don't need a tablet for heavy usage, like gaming or video editing, the Galaxy Tab A7 is a good overall deal.