Samsung Galaxy S21 Ultra starts at Rs. 1,05,999, which is no small amount, so let’s see if the company has justified the price tag.

Let’s start by addressing the elephant in the room; the camera bump. While early leaked renders pointed to it potentially being an ugly thing, I must say, actually seeing it, you realise it’s not that bad. Sure, when you put the phone down on the table it won’t sit flat. It is bothersome, but an easy fix when you put this phone in a case. And yes, you’re going to want to put it in a case. The Samsung Galaxy S21 Ultra might use Corning’s Gorilla Glass Victus glass and it may be tough, but glass is glass and it will break if dropped. What doesn’t help this is the fact that the phone is so smooth to the touch that getting a solid, non-slip grip has been an effort. Samsung stopped bundling cases with their premium smartphones this year, so you’re better off buying one, like the one I got from Spigen.

The phone, even though slightly slippery, is 100 per cent premium in its construction. The camera bump is also very elegantly designed given how it blends into the frame. As far as usability goes, the volume and power buttons on frame-right while frame-left is completely blank, meaning no more Bixby button.

Samsung’s smartphones, flagship or otherwise, tend to have some of the best displays. The Samsung Galaxy S21 Ultra takes that up a notch and then some. Featuring a 6.8-inch Dynamic AMOLED display with an adaptive refresh rate of 120Hz. The cool thing here is that the display will dynamically change its refresh rate going as low as 10Hz when you have a static image on the display, ramping up immediately to 120Hz when you navigate etc. It’s actually very seamless and also effective and yes, it works with the display set to QHD+ resolution. 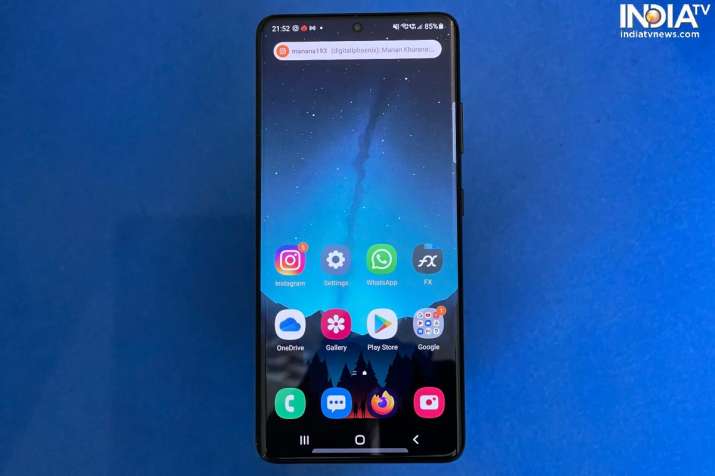 Additionally, the panel is also HDR10+ certified and goes all the way up to 1500nits of peak brightness for the best HDR viewing experience. The phone offers two colour modes; natural and vivid. Natural makes the display less saturated and warmer in order to be colour accurate while vivid boosts the saturation, giving you colours that pop. While the smaller S21 and S21+ get a flat display, the S21 Ultra still comes with a slight curve, but the palm rejection is good enough for ghost touches to not be a problem.

The Samsung Galaxy S21 Ultra we are reviewing is powered by the Exynos 2100 SoC, made on the 5nm process. We also have 12GB RAM on board, although there’s also a 16GB variant, although that’s going to cost you a whole lot more. Whatever you want to do on this phone, you’re going to find the experience to be very smooth, stutter-free and stable. Three hours of CoD:Mobile saw the phone get warm to the touch, but that’s more from holding the phone for that long, and not due to the traditional “heating issue.” Samsung really seems to have hit it out of the park with their home-grown chip, which has almost always been criticized for its performance in comparison to the Qualcomm equivalent. Not this time. Geekbench 5 numbers for the Samsung Galaxy S21 Ultra look very promising, with a single-core score of 798 and a multi-core score of 2614. These numbers don’t beat the score of the iPhone 12 Pro, but honestly, using the Samsung Galaxy S21 Ultra doesn’t feel like a slower or a poorer experience. I’ve gamed on this for hours and found the experience to be top-notch. 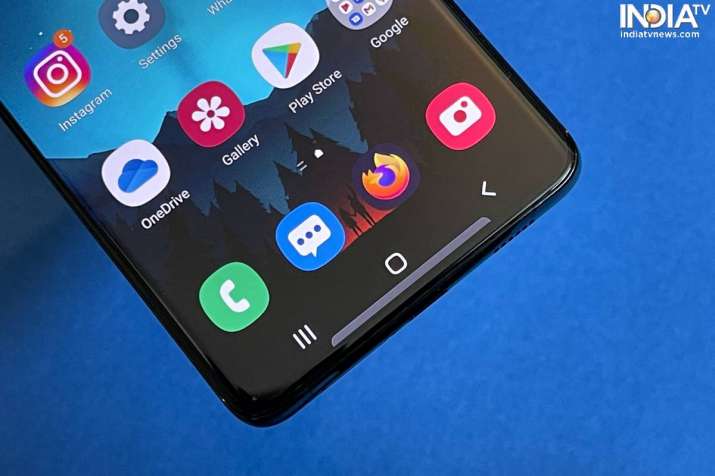 What really helps the user experience is Samsung’s OneUI 3.0, which is now significantly more refined that OneUI2.0. while most of the changes are subtle and under the hood, there are a number of UI-tweaks that will stand out. The animations and transitions are one of the most obvious ones, whether its switching windows or pulling down the notification bar. The animations aren’t fast and snappy like you see on OnePlus phones, but more on the mellow and smooth side, giving them a more elegant feel. The Edge panel continues to exist in OneUI 3.0, although at this point, I'm not sure if it has any use. Thankfully, you can turn the feature off if it gets annoying.

One of the hardware-software marriage that was of concern at launch was Samsung Pay and the inclusion of MST. The Magnetic Secure Transmission system is what has enabled Samsung Pay to work with regular POS machines, without requiring any kind of hardware or software change at the vendor side. Initially, there was concern that the feature was removed, but I can confirm that it is present on the India units of the phone, a fact that has also been confirmed by Samsung.

The camera on the Samsung Galaxy S21 Ultra is probably its biggest feature. There are four cameras here, a 108MP primary camera, a 10x zoom lens with 10MP resolution, a 10MP 70mm lens and lastly, a 12MP ultra-wide lens. While these are great on their own, the camera app allows you to use them as one unified camera system, allowing you to go from 0.6x all the way to 100x. This is available in both photo and video modes. While there’s definitely a LOT to unpack on the camera side of things, I’m going to try to simplify it for you. 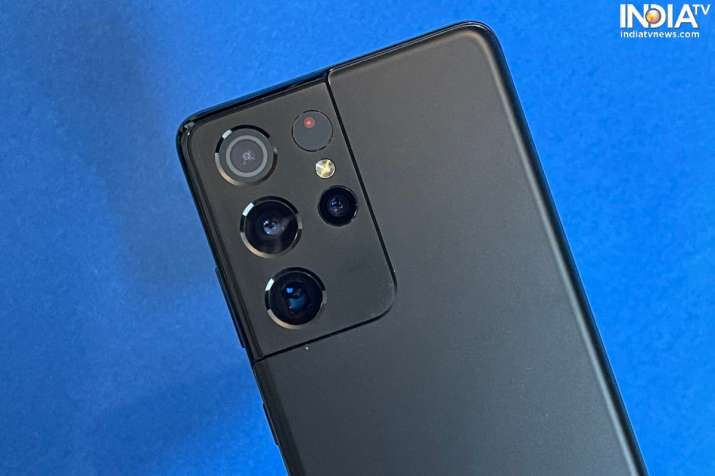 The primary 108MP camera produces incredible results. During the day, the S21 Ultra’s main camera is fast to focus and the image stabilisation makes sure your handshake doesn’t ruin the shot. When you move indoors or into relatively low light situations, the results are noise-free and do tend to retain some level of detail. The sensor is performing a 9-in-1 bin, so it is to be expected that the results would be of good quality. Helping the camera this time is a Laser system, ensuring that you can lock onto your subject even in the lowest of lighting conditions. The only catch is, you have to be relatively close to it for the laser to hit the target and then bounce back to deliver the focusing information.

The telephoto lenses work together to take you all the way to the moon and while the results are impressive, they could definitely be better. Shots taken at 100x are slightly hazy, lacking in sharpness, but are surprisingly easy to achieve. When you zoom into 100x, the spot at the centre of the frame is what the camera will “hold”, eliminating hand-shake as much as possible. As good as this is, sometimes, it can make it difficult to make adjustments to the frame. The 100x space zoom does work as advertised and does deliver usable results, but I’m not sure how long the excitement about this feature will last.

Lastly, we’ve got the 12MP ultra-wide camera, which unlike those found on most other smartphones, actually does come with auto-focus. This allows you to exercise more creativity without having to worry about whether your shot will be in focus.

The battery situation on the Samsung Galaxy S21 Ultra is one where I find things a little frustrating. The phone packs a 5000mAh battery, but the charging is capped at 25W wired and 15W wireless. Not only did the company reduce the fast charging speed (45W on S20 series to 25W on S21 series), but they also pulled an Apple and removed the charger from the box. Charging the phone is definitely a slow process, especially when you consider the fact that phones from many other manufacturers, which cost one-fourth the price, offer much faster charging.

I used the phone at its QHD+ resolution and adaptive refresh and got consistently a little over a day’s worth of use. Usage involved a lot of photos being taken, videos being shot and of course, games being played. I doubt that those who actually buy this phone will use it so heavily for such tasks, so you can expect slightly better battery life. In fact, if you tone down the resolution to FHD+, you can easily expect the battery to last a day and a half. Just know that when the phone does die, expect to have to shell out a little over 2 hours to charge it back up to 100 per cent.

Should you buy the Samsung Galaxy S21 Ultra? 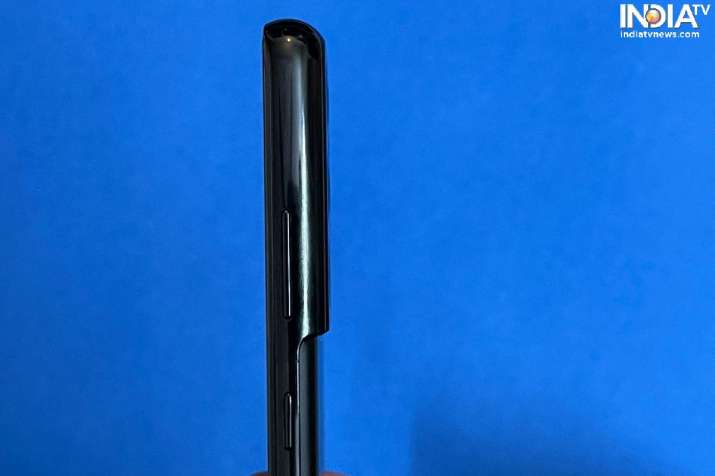 The Samsung Galaxy S21 Ultra feels every bit premium and every bit a smartphone that resides at the very top of the flagship ladder. Now that it also brings support for the S-Pen, it's likely to render the Note series redundant. This year, Samsung doesn’t leave out anything when it comes to features, performance or even the cameras. The only thing I wish Samsung would improve is the speed at which they charge the phones. If you’re looking for the latest and the most premium Android experience that will last you at least 2 years, then the Galaxy S21 Ultra makes perfect sense.