With the latest addition to the legacy, My Talking Tom brings the famous six iconic characters in a play-as-you-want sandbox experience.

Outfit7, the game developer behind the popular game My Talking Tom, has launched yet another game on the Google Play Store and Apple App Store. My Talking Tom Friends continues the legacy by bringing the cat that repeats what we say alongside his group of friends. They can now do much more than just repeating what the user says. And that is the reason why you should be excited about this.

With the latest addition to the legacy, My Talking Tom brings the famous six iconic characters in a play-as-you-want sandbox experience. These characters include Talking Tom, Angela, Hank, Ginger, Ben and Becca.

These are all cute animals that would appeal to most children. In the game, the player needs to ensure he is feeding the characters on time. Also, they need to have a bath every now and then. Apart from revolving just around the house, the game also brings a few mini-games.

These mini-games depend on the character you are playing as. Initially, the player will get the iconic Talking Tom, who can use his skateboard to enter into a mini-game where he can skate around collecting coins. 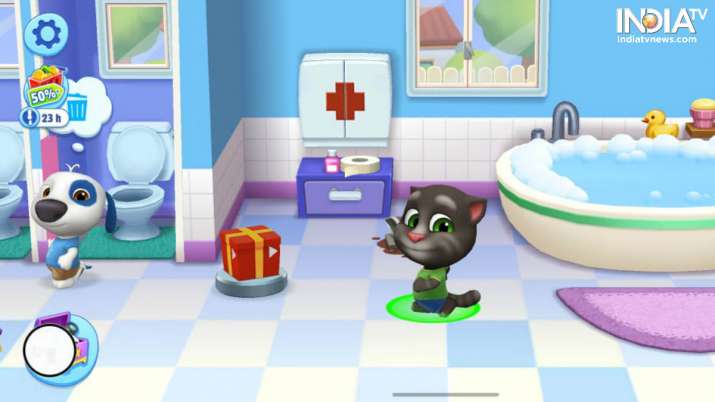 When not playing the mini-games, the player can roam around the house itself. They might come across a couple of activities. Upon performing these activities, the user will get rewards. The house is scrollable and it consists of a backyard, living room, nap room, bathroom, kitchen and much more. Players can take advantage of these areas in order to keep the characters busy.

It’s not only the house and the mini-games where the players are stuck during their time in the game. There is also a bus that will take the characters to the city. The players can then purchase household items including food, medicine, toiletries and more.

All these purchases can be made using the in-app currency. In order to earn more coins, the users can either play the mini-games or perform activities and wait for the activity bar to fill.

Should you install it?

My Talking Tom Friends is a fun game that would be great for passing time. It has a ton of activities to do, which will ensure the player does not get bored. So, yes, you should give it a shot. The app has been made available on both Android and iOS starting today.