Lionel Messi has turned 33 on Wednesday and it's an alarming sign for every football fan that there are only a few years left for everyone to enjoy the game of the greatest footballer of all time.

On this day 33 years ago, a boy was born in Rosario, Argentina, who went on to rule the game of football on his own terms and is still doing it - Lionel Andres Messi. The Barcelona talisman has turned 33 on Wednesday and it's an alarming sign for every football fan that there are only a few years left for everyone to enjoy the game of the greatest footballer of all time.

Messi, at the age of 13, was signed by then Barcelona's Technical Secretary Charly Rexach, who gave the current Barcelona captain his first contract on a paper napkin. The wonder boy from Argentina then joined the Barcelona's youth academy 'La Masia' to nourish his skills.

Today in 2000, Messi's first Barca contract was signed on a napkin at a Barcelona restaurant. He was only 12. pic.twitter.com/yxMTKJnJkT

Messi was diagnosed with a growth hormone disorder, or GHD during his young days but Barcelona took care of him and later the Argentine serve them with sheer loyality.

Messi didn't take much time to make his debut for Barcelona as on November 16, 2003, at the age of 17, he came as a substitute against RCD Espanyol for the first time.

The record six-time Ballon d'Or winner scored his first goal for the Catalan giants against Albacete. Barcelona were winning the match 1-0 in 87th minute, when, then manager Frank Rijkaard decided to bring a substitute. Star striker Samuel Eto'o was subbed-off for a 17-year-old kid. His arrival created some energy on the pitch, within the four minutes he scored an absolute beauty and the whole Camp Nou started chanting ‘MESSI... MESSI...’

Lionel Messi in his no. 30 jersey marked his arrival at the big stage. Later Messi donned the iconic no.10 jersey for Barcelona and went on to become the greatest of all time. He holds the record most goals in LaLiga history with 440.

In 2012, the world witnessed the true face of Lionel Messi, the one which proved him to be the 'Alien' among human beings. Messi, who was just 25 then, scored 91 goals, combining club and nation, to break the world record of Gerd Muller for most goals in a calendar year. The German legend hit 85 goals for Germany and Bayern Munich in 1972. Leo outclassed Muller in the first week of the December but he didn't stop there and ended the year with a magical performance against Real Valladolid in a 3-1 victory. Messi’s tally of 91 goals was more than the 13 La Liga teams from the 2011-12 campaign. 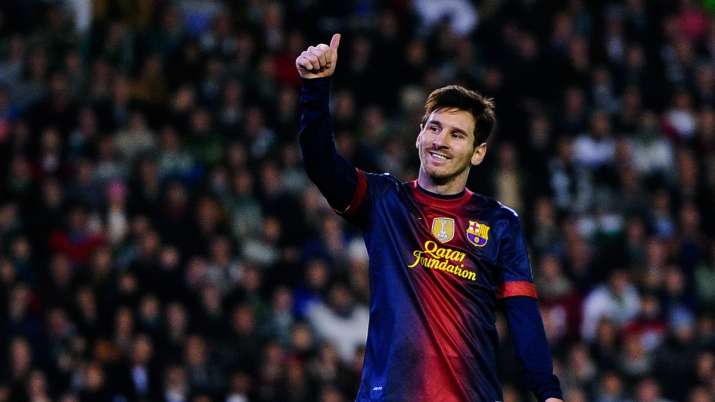 Messi guided Barcelona to 10 La Liga titles, 4 Champions League titles, 6 Copa del Ray, 3 Club World Cups, and 3 European Super Cups. The 33-year-old is only missing a trophy with his international team Argentina in his cabinet. Messi came close thrice to win the gold for Argentina - 2014 WC final, 2015 and 2016 editions of Copa America but faced defeat in all three finals.

The 2014 World Cup was the brightest chance for Messi to clinch the most coveted trophy in world football he missed as Germany lifted the title with a lone goal from super-sub Mario Gotze in the 113th minute of the final. Messi received the golden ball for the best player in the tournament but all he wanted to lift was the World Cup trophy which he didn't.

In 2019, Lionel Andres Messi continues to prove his dominance over rivals in world football and showed why he is the Greatest of All Time (G.O.A.T) by winning his record 6th Ballon d'Or award.

Messi overtook his arch-rival, Cristiano Ronaldo, to become the first footballer to win the coveted Ballon d'Or trophy record six-time. In their decade long domination in world football, it was never a single occasion when the Portuguese managed to overtake to Barcelona maestro.