In a first, NASA scientists at the International Space Station (ISS) are growing radish plants that are high source of mineral, calcium and potassium and Vitamin C. On Nov. 30, 2020, NASA astronaut Kate Rubins harvested radish plants growing in the Advanced Plant Habitat (APH) aboard the International Space Station. She meticulously collected and wrapped in foil each of the 20 radish plants, placing them in cold storage for the return trip to Earth in 2021 on SpaceX’s 22nd Commercial Resupply Services mission.

The plant experiment, called Plant Habitat-02 (PH-02), is the first time NASA has grown radishes on the orbiting laboratory. NASA selected radishes because they are well understood by scientists and reach maturity in just 27 days. These model plants are also nutritious and edible, and are genetically similar to Arabidopsis, a small flowering plant related to cabbage that researchers frequently study in microgravity.

"Radishes are a different kind of crop compared to leafy greens that astronauts previously grew on the space station, or dwarf wheat which was the first crop grown in the APH," said Nicole Dufour, NASA APH program manager at Kennedy Space Center. “Growing a range of crops helps us determine which plants thrive in microgravity and offer the best variety and nutritional balance for astronauts on long-duration missions.”

In a recent tweet shared by ISS, it showed how the astronauts have made holes in the radish plant leaves to identify which plant leaves have been taken for samples. 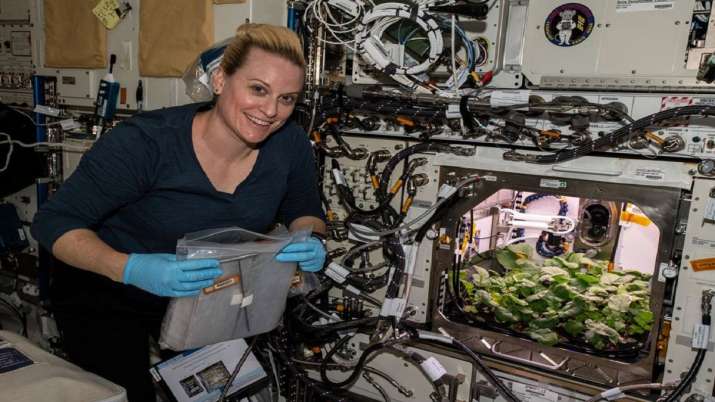 The structure of the experiment will allow NASA to identify the optimum balance of care and feeding needed to produce quality plants. While growing inside the habitat, the radishes required little maintenance from the crew.

Unlike previous experiments in NASA’s APH and Vegetable Production System (Veggie), which used porous clay material preloaded with a slow-release fertilizer, this trial relies on precisely defined quantities of provided minerals. Such precision allows for a better comparison of nutrients provided to and absorbed by the plants.

The study’s principal investigator, Karl Hasenstein, a professor at the University of Louisiana at Lafayette, has conducted plant experiments with NASA since 1995. From this project, Hasenstein hopes to learn how space conditions like weightlessness affect plant growth, and how well the light response and metabolism resembles “Earth-grown” plants.

“Radishes provide great research possibilities by virtue of their sensitive bulb formation,” Hasenstein said. “We can grow 20 plants in the APH, analyze CO2 effects, and mineral acquisition and distribution.”

The team has set up a control population of plants in the ground control plant habitat unit in the International Space Station Environmental Simulator (ISSES) chamber inside Kennedy’s Space Station Processing Facility. Radishes have been growing under nearly identical conditions in the ISSES since Nov. 17, and researchers will harvest the control crop Dec. 15 for comparison with the radishes grown on station. This historic harvest does not mean the experiment is over, Dufour added.

“The APH has two science carriers, so shortly after the first harvest, the second carrier will be used to repeat the experiment by planting another set of radish seeds,” she said.

Hasenstein highlighted the contracted support team from Techshot. Teams from this mission, integration, and support contractor helped shape the payload from the beginning and guided it through the path to space. Project scientists also assist the principal investigator with the experiment and made it possible for researchers to interact with payloads even when they aren’t at the center.

Likewise, Dufour cited Sierra Nevada Corporation’s team in Madison, Wisconsin, for remotely monitoring the telemetry from the APH flight unit and helping tweak performance parameters. She said their dedication contributed to the success of the flight implementation.

With plans to explore the Moon and someday Mars, NASA knows astronauts will need to grow their own food to support long-duration missions far from home. As part of the Artemis program, NASA plans to establish sustainable exploration on and around the Moon by the end of the decade.

“It’s a privilege to help lead a team that is paving the way to the future of space crop production for NASA’s exploration efforts,” Dufour said. “I’ve worked on APH since the beginning, and each new crop that we’re able to grow brings me great joy because what we learn from them will help NASA send astronauts to Mars and bring them back safely.”

The Biological and Physical Sciences (BPS) Division of NASA’s Science Mission Directorate at NASA Headquarters in Washington provides funding for Veggie, the APH, and related investigations.