Modi In US: The main elements of PM Modi's US visit will be bilateral meetings with President Joe Biden, participation in the Quad Leaders' Summit and address at the UN General Assembly.

Prime Minister Narendra Modi has left for the United States where he will participate in Quad Leaders' Summit, address the high-level meeting of the 76th session of the United Nations General Assembly as well as a bilateral meeting with US President Joe Biden at the White House.

The main elements of the programme are bilateral meetings with the US leadership, participation in the Quad Leaders' Summit, address at the UN General Assembly and business interactions. PM Modi will be accompanied by a high-level delegation including the External Affairs Minister S Jaishankar and National Security Advisor Ajit Doval.

During his upcoming US visit, Prime Minister Narendra Modi and US President Joe Biden will discuss the current regional security situation following the recent developments in Afghanistan in a bilateral meeting on September 24, said Foreign Secretary Harsh V Shringla, adding that the two leaders would discuss the need to "stem radicalism, extremism, cross-border terrorism and dismantling of global terrorist network".

Quad is a partnership among four like-minded countries (India, US, Japan and Australia), in the pursuit of common interests in striving for a free open and inclusive Indo-Pacific region. 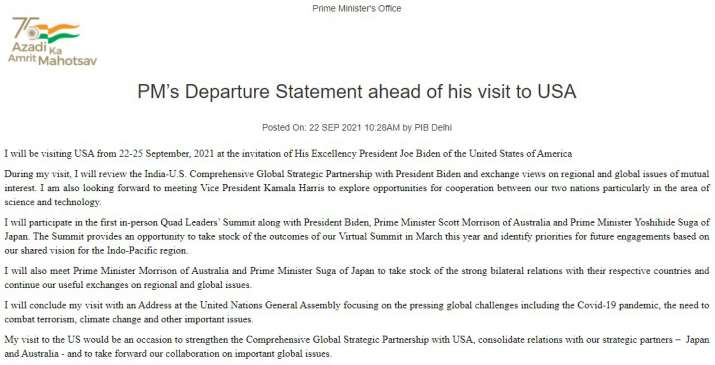 The four leaders will share views and perspectives on the regional situation and the emerging challenges including in South Asia and the Indo-Pacific region on how to work together to contain COVID-19, evolve a common approach to emerging technologies and a means of addressing climate change.

The leaders will take stock of progress made since the March summit especially in the COVID-19 vaccine partnership, they will identify new areas of cooperation that will reinforce the positive and constructive agenda of the port, including contemporary areas that will benefit the Indo-Pacific region as a whole.

On September 25, PM Modi will address the United Nations General Assembly (UNGA) at its 76th session as the first head of state of government to do so. The theme for this year's general debate is "Building resilience through hope to recover from COVID-19," "Rebuild sustainability," "Respond to the needs of the planet," "Respect the rights of people" and "Revitalise the United Nations."

While addressing the 76th session of the UN General Assembly, the Prime Minister will dwell on the important issues, including the regional situation, cross border terrorism, global efforts to combat COVID-19 and climate change and the need to reform multilateral institutions.

The fourth element of the Prime Minister's visit would be bilateral meetings with his Australian and Japanese counterparts, Scott Morrison and Yoshihide Suga.

This will be the Prime Minister's first visit abroad, beyond the neighbourhood. He had made a brief visit to Bangladesh in March this year and this is his first visit since the onset of the COVID-19 pandemic.

One of the highlights of PM Modi's visit is the meeting with US President Joe Biden in the White House. This would be his first in-person meeting with President Biden. Both leaders have been in regular contact in recent months. It was in November that PM Modi called to congratulate President Biden on his electoral victory. Since then, they have spoken in February and April this year.

PM Modi has also participated in three major conferences and summits with President Biden as a participant. These were the Quad Leaders' Summit, which was virtually held in March last year, this year.

At their bilateral meeting on September 24, the Prime Minister and President Biden will review the robust and multifaceted India-US bilateral relationship. They will also discuss how the Comprehensive Strategic Global Partnership between our two countries can be enriched further.

The bilateral meeting will also feature the current regional security situation following recent developments in Afghanistan, India's stakes as a neighbour and a long-standing and preferred development partner of the people of Afghanistan. The meeting will also discuss the need to stem radicalism, extremism, cross border terrorism, and the dismantling of global terrorist networks. They will also discuss the reform of the multilateral system including the UN Security Council.

The Indian diaspora in the United States, which consists of about 4.2 million people is a very important factor in the relationship. They play a major role and have been a pillar of support in strengthening the relationship. It is expected that the Prime Minister will highlight the importance of people to people ties between the two nations and the potential of enhancing these ties further, especially through higher education, linkages and mobility.

Earlier, India had appreciated the facilitation that has been provided by the United States in helping Indian students travel to the US for the beginning of their term. The importance of smooth post-COVID travel especially for students is also an important factor and is expected to be discussed.

PM Modi's bilateral engagements will include a meeting with Vice President Kamala Harris, this will be the Prime Minister's first formal interaction with the Vice President. PM Modi and Vice President Harris had earlier spoke on the telephone in June this year. The Vice President had offered to prioritise India, in making US vaccines available in the wake of the COVID situation at that time in India.

At their meeting at the White House, the Prime Minister and Vice President Harris are expected to exchange views on bilateral, regional and global issues of mutual interest.

He will also be having some business level interactions with the objective of strengthening two-way trade and investments. The US is a very large investor in India, there are a lot of companies that have not only invested significantly in India but also have the potential to invest either in terms of new investments or expand their existing investments in India.

In that context, PM Modi will have few meetings with select CEOs of leading US companies.

The Prime Minister's visit with the compact programme will bolster India's key strategic bilateral partnership with the United States and close partners Australia and Japan. It will also consolidate the Quad as a force for global good and will give the Prime Minister an opportunity to share his vision at the multilateral arena.