Chartered aircraft VT-UPZ crashes in Mumbai's Ghatkopar: A 12-seater chartered aircraft crashed in thickly populated suburb of Ghatkopar in north-east Mumbai on Thursday killing five persons, including a pregnant engineer and a pedestrian. The plane - KING AIR C90 - crashed into a construction site soon after taking off from Juhu airstrip for a test flight. The black box of the ill-fated plane was recovered late afternoon, however, the cause of the accident is yet to be ascertained. 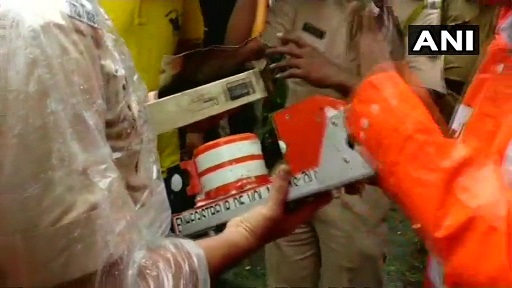 Civil Aviation Minister Suresh Prabhu said that the DGCA has been directed to conduct an investigation into the plane crash incident.

"Saddened to hear the news about the aircraft crash in Mumbai.Have directed DGCA to conduct an investigation into the plane crash at the earliest. I'm in constant touch with on ground developments," he tweeted.

Saddened to hear the news about the aircraft crash in Mumbai.
Have directed DGCA to conduct an investigation into the plane crash at the earliest. I'm in constant touch with on ground developments.

DG Civil Aviation B S Bhullar told PTI that the Aircraft Accident Investigation Bureau will conduct a detailed probe into the crash.

The chartered plane crashed at 01:35 pm on Thursday at Old Malik Estate, near telephone exchange, Prithvi building in Mumbai's Ghatkopar (W). The plane had taken off from Juhu for testing, a ground report said.

Mumbai's Metropolitan Fire Brigade, 108 ambulance service and police services were mobilised soon after receiving an alert about the crash. A team of National Disaster Relief Force was also mobilised to help in the rescue effort. 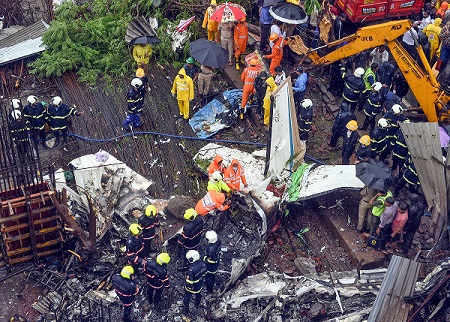 According to the fire officials, the department got a distress call at 01:16 pm. The brigade rushed three fire engines to the spot, which were able to extinguished blaze by 01:40 pm.

The plane, which crashed in the Jagruti Nagar locality shortly after 1 pm today, once belonged to the Uttar Pradesh government and was sold to UY Aviation, an official said. The King Air C90 12-seater aircraft had taken off from the Juhu airstrip on a test flight, he said. Civil Aviation Minister SureshPrabhu has directed the Directorate General of Civil Aviation (DGCA) to conduct an investigation into the plane crash, an official said.

A team of DGCA officials rushed to the crash site for a preliminary investigation, the official said. It is expected that the detailed enquiry will be done by the Aircraft Accident Investigation Bureau (AAIB), he added.

As reports of the crash came in, police, fire brigade and disaster management teams rushed to the spot and bodies of those killed were taken to the nearby Rajawadi hospital in Ghatkopar, a civic official said.

A fire brigade official said, "Our control room got a call at 1.15 pm informing a plane crash. Our jawans were immediately rushed at the site to launch the rescue operation. Four fire engines and as many water tankers were rushed to douse the fire that occurred after the plane crashed."

"The aircraft took off from Juhu airport for a test flight. There were two pilots and two aircraft maintenance engineers on board. All of them, along with one person on the ground, are dead," a DGCA official said.

The small private plane belonged to gutka baron Deepak Kothari. It was sold by the Uttar Pradesh Government to the private company in 2014.

P Kuthariya, husband of Capt. Mariya held the aviation company responsible for the crash of the ill-fated plane. He said that the incident could have been averted.

"The incident could have been averted. Maria had told me that the flight won't be flown due to bad weather. The aviation company is responsible for this unfortunate incident," he said.

A ghastly sight of a burning body shocked local residents as they ran out of their houses after a chartered plane crashed in suburban Ghatkopar on Thursday afternoon.

"The explosions following the crash and flames leaping in the air were so huge that initially we could not understand what has happened," said Prakash S Giri, who lives opposite the construction site where the 12-seater plane crashed.

"The toll could have been higher had the plane hit any of the high-rises around the spot," he said.

"The pilot did not let this happen. I think the pilot purposefully manoeuvred the plane to this site to avoid casualties," he said.

"There was a very loud explosion. Smoke and flames engulfed the area in the 50-metre radius, leaving us clueless as to what had happened," Giri said.

"We were having lunch when we heard the first explosion. We immediately rushed out..... saw a burning body near the crash spot. We tried to save the man but the flames had engulfed him so completely that we found ourselves helpless," he said, recounting the horror.

Another local resident said after the crash, there were four-five more explosions. A man living on the third floor of a nearby building jumped out from the balcony after the crash, fearing that his building was going to collapse, one of the eye-witnesses said. But the incident could not be confirmed independently.

Read this story in Hindi