Afsana Khan took to her Instagram Stories to share that she is not feeling well and requested fans to pray for her health. Later, she shared another post apologising to her admirers who expected her to be a part of Bigg Boss 15.

Much anticipated and controversial reality show Bigg Boss 15 is knocking on our doors. Hosted by Bollywood superstar Salman Khan, BB 15 will be seen locking some popular names inside a house for months and a speculated list of these celebrities is already doing rounds on the Internet. Punjabi singer Afsana Khan's name was also on the list. However, media reports on Tuesday claimed that the singer has withdrawn her name due to health issues and she has already returned to Punjab. Now, the singer has confirmed the same.

Afsana took to her Instagram Stories to share that she is not feeling well and requested fans to pray for her health. Later, she shared another post apologising to her admirers who expected her to be a part of the reality show. Confirming the news she posted a picture of some medicines writing, “Sorry my fans plz,” followed by folded hands and crying emojis. 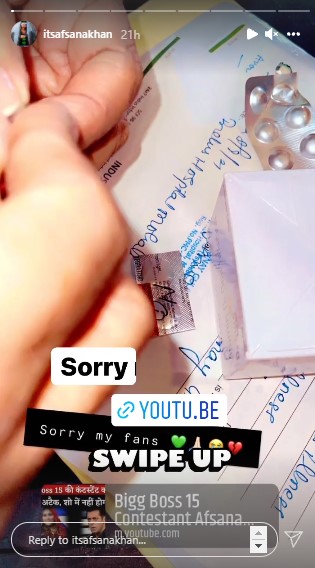 For the unversed, Afsana Khan is a popular name in the Punjabi industry. She sang the most popular song of last year- Titliaan featuring Harrdy Sandhu and Sargun Mehta. She was in news during Bigg Boss 13, for actively supporting Shehnaaz Gill. She had then revealed that she has worked with her on many songs.

So far, celebrities including Karan Kundrra, Donal Bisht, Umar Riaz, Tejasswi Prakash have been confirmed to be part of Salman Khan's show. apart from them, Pratik Sehajpal, Shamita Shetty and Nishant Bhat of Bigg Boss OTT are said to join them for BB 15.

The for this year's season will 'sankat in jungle'. The new season of 'Bigg Boss' will see contestants facing number of challenges as the contestants have to fight tooth and nail for their survival in the jungle. Be it finding a bed to sleep, resources to cook food, place to perform daily chores, it is going to be a wild ride for the inmates. The new season will premiere on October 2 at 9.30 pm and thereafter air every Monday to Friday at 10.30 pm and Saturday and Sunday at 9.30 pm on COLORS.