'I am not pregnant': Hailey Bieber dismisses pregnancy rumours

Hailey Bieber took to her Instagram Stories to clarify that she is not expecting her first child with husband Justin Bieber. She also asked for news outlets to stop spreading misinformation about her and to focus on the election. Take a look.

Model Hailey Bieber on Friday took to her Instagram Stories to clarify that she is not expecting her first child with husband Justin Bieber. She also asked for news outlets to stop spreading misinformation about her and to focus on the election. Hailey in her Story said that she is "not pregnant".

In the post uploaded by the star she added that she would want the news outlets to stop writing fake news which their 'sources' had mentioned and should focus more on what is important-- 'the elections.'

According to the model, a publication had intended to report that she is expecting her first child with the singer-husband Justin Bieber, clarifying which, she wrote: "I am not pregnant. So please stop writing false stories from your 'sources' and focus on what's important aka the election." 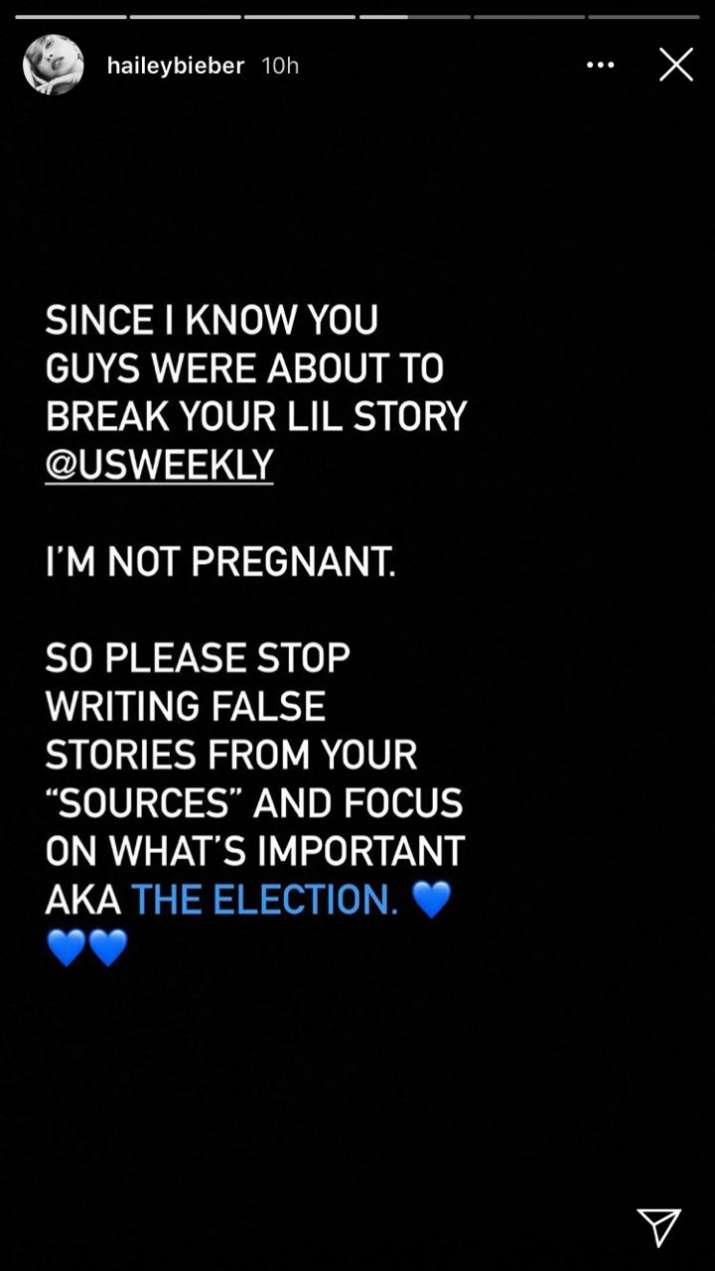 Hailey and Justin are yet to become parents, but they have discussed having kids. In February, Justin had said that they would start a family "in due time", but have some things to check off their to-do list before that.

Justin had said: "I want to enjoy being married for a little bit, go on tour, be married, enjoy travelling with just us, build more of our relationship. And I think, yeah, that is definitely the next step for sure."

Hailey recently revealed she is excited to have kids, particularly a daughter that she can pass her cashmere sweaters down to. She joked that she is saving her Bottega Veneta sweater for her daughter because "it's never going to go out of style".

On the work front, Hailey Bieber was last seen as the face of Levi Jeans (2019). She and many other celebs collaborated to make a video with Levis, wherein the video encouraged people to get out and vote.