Actress Sara Ali Khan, who will soon be seen in 'Atrangi Re along with Akshay Kumar and Dhanush, has expressed her gratitude to her upcoming films director Aanand L Rai and her ‘Simmba maker Rohit Shetty for giving her the opportunity to be a part of their films.

Actor Sara Ali Khan brought her rhyming skills into play to shower love on her directors Aanand L Rai and Rohit Shetty. Taking to her Instagram, she shared a slew of photographs of them in a quirky collage that sees them indulged in a funny conversation. While sharing the photo online, the actress wrote, “Only love, respect, gratitude and a little masti. Aapki bacchi always hasti.”

For the unversed, Aanand L Rai has helmed her upcoming movie Atrangi Re, Rohit on the other hand, directed Sara previously in Ranveer Singh starrer Simmba. Take a look: 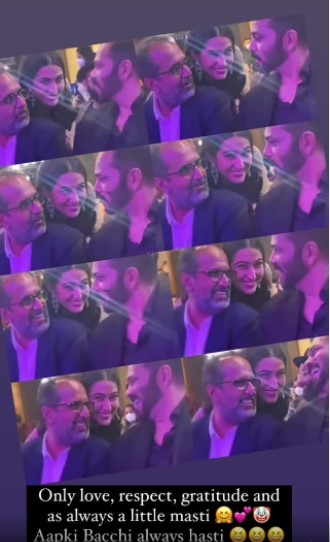 Sara Ali Khan had earlier expressed gratitude to her upcoming film "Atrangi Re" director for giving her the opportunity to play the character Rinku. She said working with the film's director Aanand L. Rai has been a memorable experience as his direction allowed her to explore the nuances of the character. Sara said, "Working with Aanand Ji has been all that any actor could want, so I'm truly grateful that he chose me to be his Rinku (her character in the film). Now I am eagerly waiting for more content to release for the audiences and see their response (sic)."

The actress has further upped the excitement for the film with the album's first song titled 'Chaka Chak'. The track, which is perfect for wedding season, also marks Sara's first solo song. Expressing gratitude for the love that the audience is showering on the trailer and the song, Sara shared, "Really overwhelmed at the Chakachak response to Rinku. The trailer and my first solo song has released so far and the love that's coming my way is exciting (sic)."

'Atrangi Re', which also stars Dhanush and Akshay Kumar in lead roles, is all set to stream on Disney+ Hotstar from December 24.

Likewise, during the wrap of Simmba, Sara also thanked Rohit Shetty for his warmth, guidance, patience during the shoot.